About 2,775 people can attend Sunday’s match against Montreal 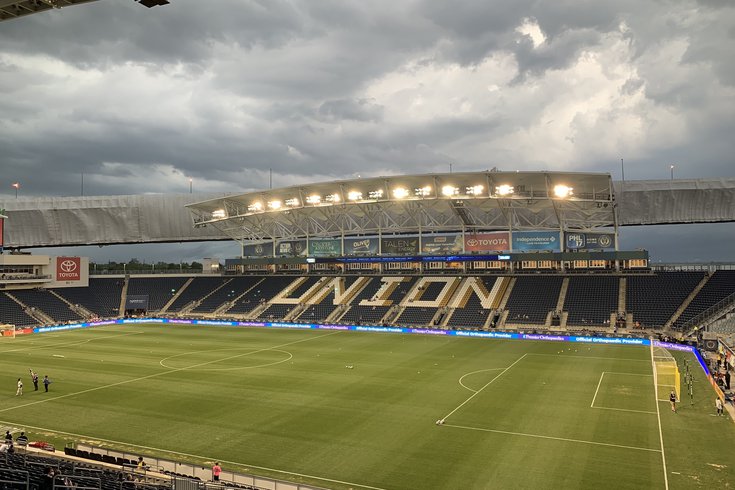 About 2,775 people will be permitted inside Subaru Park for the Philadelphia Union's game Sunday – the first time fans will be in attendance this season due to the COVID-19 pandemic.

The Philadelphia Union will be the first local professional sports team to welcome back fans amid the COVID-19 pandemic when the soccer team takes the pitch Sunday against the Montreal Impact.

Roughly 2,775 people will be allowed inside the Subaru Park, the MLS club announced. That includes including fans, staff and players.

Attendees will be required to wear a face mask except when eating or drinking. Temperature checks will be administered upon arrival. Seats have been spaced out throughout the bowl to allow for social distancing.

All touch points between stadium staffers and fans have been eliminated. Fans will be required to have a mobile ticket and parking pass, and they only can purchase concessions with a credit or debit card.

Season ticket holders will be eligible to purchase tickets to any available seat. Any remaining tickets then will be made available to the general public.

All tickets and parking passes for originally-scheduled regular season matches are no longer valid. Tailgating will be banned.

"Philadelphia Union fans are the heartbeat of this organization and we are thrilled to be able to open the doors of Subaru Park after a long hiatus," Union President Tim McDermott said. "We have worked tirelessly to implement a set of strict guidelines and procedures that will ensure that fans can watch the team they love comfortably and safely."

It remains unclear when any other Philadelphia sports team will be permitted to bring its back fans. The state's relaxed gatherings limits do not supersede those put in place by local authorities.

Philadelphia officials must ease their own restrictions before the Eagles, Flyers, 76ers or Phillies can bring back fans. But the city's restrictions do not apply to the Union since the team plays its games in Chester, Delaware County.

The 2020 MLS season was put on hold in March due to the public health crisis. The Union returned in July to participate in the MLS is Back Tournament at Walt Disney World, advancing to the semifinals. The MLS regular season then resumed in August.

With seven games to go in the 2020 season, the Union are tied for second place in the Eastern Conference. The club has four home games remaining, including Sunday’s match against Montreal.