National outlets have their questions about the Phils, but one thing seems certain: They're going to hit 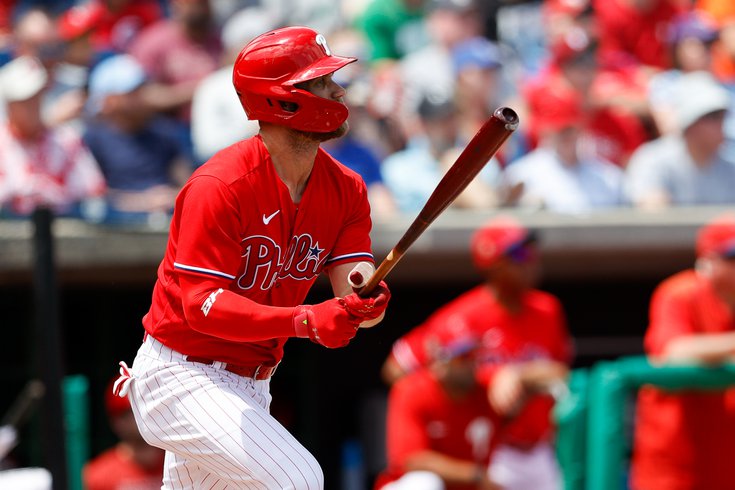 Opening Day is near.

The playoffs have expanded, the NL has a DH, and the Phillies are going in with a lineup built to hit its way to October. Citizens Bank Park is adding some good-looking eats too.

With the start of a new season comes early predictions and the initial wave of power rankings. Obviously, things will change as the months go by, but for right now, the Phillies are one of the more interesting teams in baseball, though not in a way that puts them immediately at the top of most projections (hey, remember, it's a long season).

Here's a look at where the Phillies stand in a handful of Opening Day power rankings across baseball.

And here's what some of those outlets think about the Phils:

If all goes well

ESPN has the Phillies projected to go 89-73 with a 67% chance of making the playoffs. If they make the postseason, they likely do so setting a couple of offensive records along the way and with Aaron Nola bouncing back from a rough 2021.

"If everything goes right ... The Phillies set a modern (since 1901) franchise record for runs scored with Bryce Harper, Nicholas Castellanos and Kyle Schwarber combining for 115 home runs. Luckily, the pitching is better than that 1930 team that scored 944 runs and lost 102 games. Zack Wheeler is fine after his shoulder issue in spring training, Aaron Nola pitches to his 2021 FIP (3.37) rather than his ERA (4.63) and Ranger Suarez has his ERA double -- all the way up to 2.72. Surprise of surprises, Corey Knebel locks down the ninth inning, the defense is merely "meh" rather than all-time awful and the Phillies edge past the Braves and Mets for their first NL East title -- and playoff berth -- since 2011. -- Schoenfield" [ESPN]

Of course, the defense is suspect. That's been a major concern all spring. "Meh" might be a best-case scenario here.

BUT, if the lineup hits like it's expected to, defense might not even matter for the team SI ranked 10th.

"[Phillies president Dave Dombrowski] is seemingly on a mission to prove that fielding matters as much as a wet match. The additions of Kyle Schwarber and Nick Castellanos give Philadelphia a tantalizing lineup, but if the club’s NL-worst postseason drought extends to 11 years, you’ll probably be able to trace it back to a curiously flippant attitude toward improving the league’s worst defense from last year." [Sports Illustrated]

Yeah, okay, we get it

The Athletic had its roster of local and national writers rank all 30 teams from worst to first. The Phillies landed 13th and OKAY, WE GET IT. Everyone thinks the Phillies' fielding will be terrible. Again, it might not end up even being that big of a deal.

"Oh, sure, you can laugh at the Phillies’ projected defense. You can have your fun at their expense, picturing them scurrying after balls as there’s a deep drive into left field and Nick Castellanos collides with Bryce Harper and Kyle Schwarber, and that’ll make it a 4-0 ballgame. Now they’re tangled in a headset somehow, and I don’t know if they’ll be getting that headset off again. And, wait, wasn’t Schwarber the DH in this game? How did they get their cleats stuck in the foul pole? Is one of them … is one of them wearing a life preserver?

But if it’s dingers you want, it’s dingers you’ll get, and it’s definitely not the worst era to try a Strangeglove strategy? A common joke after the Schwarber and Castellanos signings was that Aaron Nola and Zack Wheeler were going to have to strike every batter out, to which they probably responded with “OK.” They just might do that. My bold prediction is that Nola will finish with a lower ERA than Wheeler, and absolutely nobody will be upset by this. They’ll both pitch brilliantly, defensive foibles or no." [The Athletic]

They're going to score

The Phillies were ranked 13th by The Ringer as well, 1) for their offensive vision and 2) for a few variables that can make them an even more dangerous team if things work out in the Phils' favor.

Just get on base for Bryce Harper.

"But in contrast to the past five seasons, in which the plan was to let some combination of Bryce Harper, Zack Wheeler, and Aaron Nola carry the team and live with obvious flaws, there does seem to be a coherent vision: We want the ball, and we’re going to score. The top six hitters in the lineup will be some combination of Kyle Schwarber, Jean Segura, Harper, Castellanos, Rhys Hoskins, and J.T. Realmuto. And if Matt Vierling can handle center field, or Alec Bohm gets un-screwed-up, or Bryson Stott can claim either shortstop or third base, or Didi Gregorius isn’t completely washed, that group could become even more dangerous.

The Phillies’ biggest problem last year (apart from the bullpen) was the fact that they wasted Harper’s MVP season by making him take almost 60 percent of his plate appearances with the bases empty. Replacing Odubel Herrera with Schwarber at the top of the order solves that problem. And now, if Harper gets on base at anything like last year’s .429 clip, Castellanos will be able to drive him in." [The Ringer]

What do the odds say?

Our own Evan Macy took a look at 10 Phillies-related Over/Unders that you can check out HERE, but as far as a straight-up season outcome goes, here is what DraftKings' Brian Murphy wrote on Monday:

"The Braves and Mets are basically co-favorites, according to the odds, leaving the Phillies as the only team with a truly realistic chance of claiming this division. And it’s not difficult to diagnose how they are going to try to do it. When you’ve got Schwarber, Castellanos, Bryce Harper, J.T. Realmuto and Rhys Hoskins topping your lineup, you are looking to bash your way to victory. How’s the Phillies’ defense going to be? Well ... hey, how about that lineup though?" [DraftKings Nation]

At the time of this writing, the Phillies have hit four home runs in two innings during their on-deck game down in Tampa, so yeah, how about that lineup?

Genuinely believe this Phillies team is going to win the NL East. pic.twitter.com/6SGOMoRzim