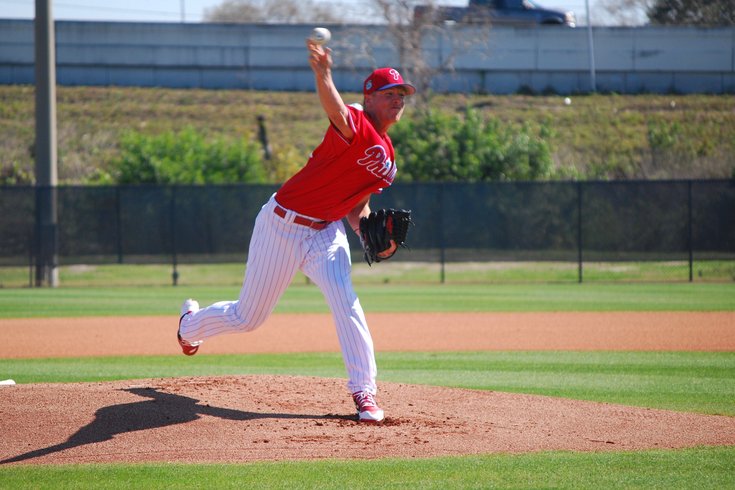 Nick Pivetta, the rising 24-year-old pitching prospect the Phillies got for Jonathan Papelbon in July of 2015, throwing in a workout this week in Clearwater. On Friday, he threw two shutout innings against the New York Yankees in Tampa.

TAMPA – Nick Pivetta has to get ready a little quicker than the rest of the healthy group of starting pitchers in Phillies camp because he’ll pitch in a meaningful game before anyone else.

Pivetta, a native of Victoria, British Columbia, will pitch for Team Canada in next month’s World Baseball Classic. The 24-year-old pitching prospect showed off some sharp stuff in striking out each of the first two batters he faced, New York Yankees outfielders Aaron Judge (curveball) and Brett Gardner (slider) in the third inning of the Phillies' 9-4 loss on Friday afternoon in the team’s first Grapefruit League game of the spring.

“I've been down here since Jan. 15 so I've been gradually progressing throughout,” Pivetta said of getting into game shape earlier this spring. “It's a good warmup for me facing these hitters. … It’s good to be around the guys and it's a great situation to find myself in.”

Pivetta allowed back-to-back base runners in his second inning of work, on a single and a walk, but showed some of the poise that helped him earn a promotion from Double-A to Triple-A last summer by escaping with his spring ERA unharmed. With one out and two on, Pivetta induced a comebacker from Starlin Castro and smoothly threw to second to get the lead runner.

“I liked Pivetta, that’s the first time I saw him,” manager Pete Mackanin said. “The thing I liked a lot from him was his throw back to second base on the (fielder’s choice), under control, no panic. He pitched very well.”

Pivetta, acquired in the July 2015 trade that sent Jonathan Papelbon to Washington, will take the mound for the Phillies at least one more time before joining Team Canada in the first week of March.

“It's a lifelong dream for me,” Pivetta said of playing for his country. “It's right up there with when I get that first big-league start with the Phillies. It's going to be an honor. … I'm excited to get through that first round and move on with to the next one with them.”

Asher goes his own way

The first five guys are pretty much locked into jobs in Philadelphia. Barring injuries, there are going to be at least a few guys in line for demotions.

Asher, who preceded Pivetta on the mound on Friday against the Yankees in Tampa, seemed unconcerned.

“It’s something we won’t know until it happens,” said Asher, who allowed one run on two hits in two innings. “I’m just out there trying to pitch, get guys out, and I’ll go where I go.”

Asher, acquired in the Cole Hamels’ trade, went 2-1 with a 2.28 ERA in five starts with the Phillies at the end of last season. He came into camp off a successful run in the Venezuelan Winter League (2-1, 2.14 ERA in eight starts), too.

But like Adam Morgan, he could be a candidate to transition into a bullpen role within the next month. The 25-year-old right-hander is more concerned with improving his repertoire no matter where he lands: he added a cutter this offseason to complement the two-seam fastball he began throwing two winters ago.

“Kind of make them go both ways,” Asher said of pitching to both sides of the plate with each pitch. “It was easy to pick up because it’s more of a fastball grip. It’s been great so far throwing it.”

Cameron Perkins and Brock Stassi each hit home runs in the ninth inning of Friday’s game, helping their own possible paths to a bench job with the Phillies. Perkins and Stassi are both non-roster players in camp without obvious starting jobs at Triple-A, where they played last season, with a herd of prospects coming up from Double-A (including Dylan Cozens and Rhys Hoskins).

With impressive auditions this spring, Perkins and Stassi could fill a role on a Phillies' five-man bench. Veteran outfielders Aaron Altherr and Chris Coghlan and utility man Andres Blanco figure to fill three of the other four roles with whoever wins the backup catching job.

“My first impression is a good one,” Mackanin said of Perkins, who also broke up a no-hitter in the seventh inning on Friday with a single. “We always look at statistics through the course of the season and he always seems to hit pretty well. They tell me he’s a solid defender wherever he plays. He doesn’t grade out as a top-notch type prospect, but he’s a solid player, he swings the bat, and he’s aggressive.”

• The Phillies were on the wrong half of a perfect game bid in Tampa before second baseman Scott Kingery reached on an error by the Yankees shortstop to lead off the seventh inning. Kingery scored the team’s first run two batters later on a Daniel Nava single.

• Adam Morgan will get the start when the Phillies play their first home Grapefruit League game of the spring at Spectrum Field in Clearwater on Saturday. The game will be televised on CSN at 1:05 p.m., with John Kruk making his debut with the new broadcast team.

• Right-handers Jeremy Hellickson and Jerad Eickhoff will make their first starts of the spring on Sunday and Monday. Hellickson is on tap to start against the Toronto Blue Jays on Sunday in Dunedin while Eickhoff follows Monday in Clearwater vs. the Tampa Bay Rays.