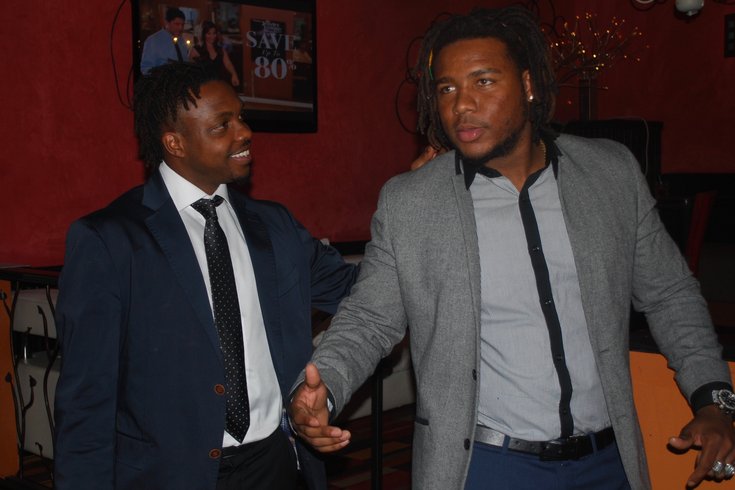 Roman Quinn catches Maikel Franco off guard by messing with the veteran third baseman's hair during a light moment prior to Tuesday night's Winter Caravan Banquet in Reading.

READING – Maikel Franco probably enjoys sleep just as much as the next 20-something kid with a job that has him on the night shift more often than not, but he’s grown wiser within the last half year, too.

Back home in the Dominican Republic, Franco’s alarm would sound shortly after 5:30 a.m. five days a week this offseason. It was all in the name of improving his body and mind for the 2017 season ahead.

“Last year I didn’t really work that hard – I was working, but, you know?” Franco said Tuesday night in Reading. “This year I’ve been waking up all the time at 5:40 in the morning. I’m going in and doing my stuff, I’m taking ground balls. And I go to the field twice during the day. That’s the key. That was my goal.”

Franco set his objectives toward the end of what could easily be written off as a sophomore slump of a second major league season. In the middle of a three-game break from the Phillies lineup, the 24-year-old slugger, listed at 6'1" and 215 pounds, was candid when asked for some self-evaluating. He said his top priority would be conditioning.

“I have to work on a lot of stuff, but the first thing I want to work on is my body,” Franco said back in September. “I just want to get in shape. Because that’s the first point for me, that’s what I have to do. And everything I can do from there – I just have to go out and find out what it takes to get ready for next year.”

Flash forward four months later, and four weeks before he’ll officially have to report to Clearwater, Fla., for the start of Phillies spring training, and Franco has followed up on his personal prescription. Before joining teammates Aaron Nola and Roman Quinn at the Reading Fightins annual winter caravan banquet on Tuesday night, an almost svelte-looking Franco said he had shed some weight.

The maturation of every individual professional athlete is not a straight line for every player. Some blossom before others. Some take time to find a routine and program that works. Some have to struggle before realizing they need to change their habits.

This winter Franco has committed himself to putting his body in the best possible shape for success in the spring and summer by strictly adhering to a workout program while watching his diet, too. It was fairly simple: Franco followed the routine of fellow Azua, Dominican Republic native and resident Neftali Feliz, a free agent reliever.

If the program had been working for Feliz, a former All-Star, Rookie of the Year, and veteran of eight big league seasons, it was well worth pursuing.

“He’s from my city so I’d go with him and I’d do everything with him – everything,” Franco said. “I changed how I eat. But I’ve also worked hard. I’ve been going to the weight room more often. I’ve just pushed myself this year, I’m getting better.”

This time a year ago, Franco was considered the top building block of a young major league lineup. He hit .280 with 14 home runs and an .840 OPS in 80 games in 2015, putting himself in the National League Rookie of the Year conversation before suffering a hand injury in early August.

Franco took a step backward in 2016. Although manager Pete Mackanin was content with his third baseman’s counting numbers (a team-high 25 home runs, 88 RBI), Franco’s .733 OPS was more than a 100-point drop-off from the previous season.

Franco’s OPS ranked 19 out of 24 major league qualifying third basemen in 2016. His 1.2 WAR ranked 28 out of 31 big league third basemen with at least 400 plate appearances. (It should be noted that another promising young slugger, Minnesota’s Miguel Sano, finished with eerily similar numbers and a lower WAR).

Franco was aware of his numbers and inconsistency. He felt changing his work habits was an important start.

“I’ve played a little bit of Winter Ball and I feel pretty good,” he said. “My defense has been really good. I haven’t hit a home run (yet) but my swing feels really good, so that’s what I’m continuing to work on.”

It’s only “five to seven pounds” but does he feel lighter and quicker?

“I just want to get in shape. Because that’s the first point for me, that’s what I have to do."

Franco has followed up on his offseason goals and put himself into position to have better success on the field in 2017. The Phillies have helped him out, too, adding two veteran hitters in Howie Kendrick and Michael Saunders to supplement the middle of the lineup, and thus, take some pressure off Franco of having to carry the load.

But the offseason isn’t quite over. The Phillies won’t play a game that matters for almost three months.

Is Franco going to keep up with the 5:30 a.m. wake-up calls in Clearwater?

“Yes,” he said with a laugh. “I have to do that because you just have to continue to work hard, and our days start early there, too. I just want to get used to it.”