The numbers don't lie. The Phillies have been playing fantastic baseball. 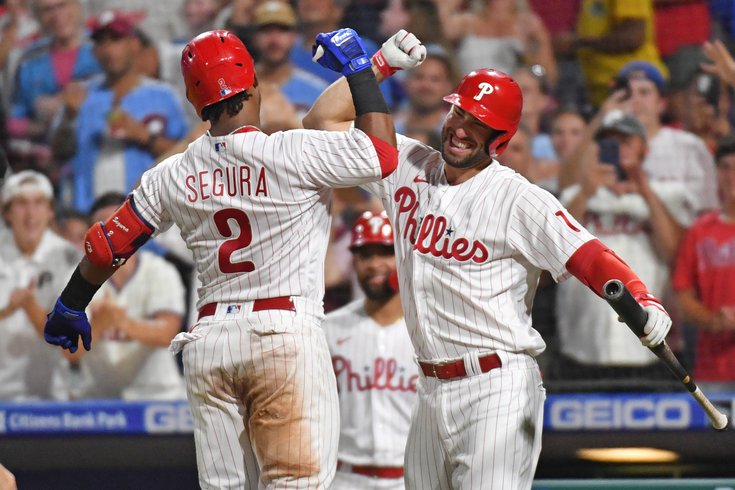 Baseball is a game of habits. A game of numbers, too.

And for the Phillies, both have been showing up fantastic.

With Tuesday night's 4-1 win over the visiting Miami Marlins, the Phils improved to 61-48 and kept their one-game cushion over San Diego in the NL's Wild Card standings.

They've won 11 of their last 12 and since the start of June, after firing Joe Girardi and promoting Rob Thomson to interim manager, have been playing some of the best – most fundamentally sound – baseball in the majors.

“This game is very contagious, the good and the bad,” catcher J.T. Realmuto said postgame Tuesday (via Phillies Nation). “When a team is doing everything well like we are right now, winning becomes contagious. We have confidence every night we step on the field.”

And the numbers don't lie, offering up a look at just how good the Phillies have been since June 1.

40-19: The Phillies' record since the beginning of June, after going 21-29 through April and May back when they looked completely lost as a team.

23-13: The club's record since losing Bryce Harper to a broken thumb on June 25.

57: The number of home runs the Phillies have hit without Harper in the everyday lineup, the third-most since Harper's injury behind the Braves (58) and the Yankees (70).

.254: The Phillies' expected batting average as a team, the second-highest in baseball behind Toronto (.261).

.955: Realmuto's slugging percentage since the start of August, the highest in the majors.

.905: Rhys Hoskins' slugging percentage seven games into the month also, the third-highest in baseball after four homers in a four-game sweep of Washington.

23: Kyle Schwarber's home-run total since June 1, second behind the Yankees' Aaron Judge with 26. Schwarber's 34 home runs in 2022 as a whole are also the second most in baseball, again, trailing only Judge's monstrous 44 with a month and a half left to go.

.333/.400/.482: Nick Castellanos' line since July 24. That streak began the day after a viral locker room confrontation with a reporter.

.385/.385/.615: Jean Segura's line since returning to second base on August 4 from a broken finger, which includes a solo homer from Tuesday night's win.

2: The number of fielding errors at third base since he took off at the plate last month. A far cry from the infamous three-error night in April.

3.44: The starting rotation's combined ERA since June 1, the fifth-lowest mark in the majors.

2.6: The bullpen's WAR since June 1, the fourth highest during that span.

35.2: The percentage of hard-hit balls allowed by Phillies pitching on the season, the second-lowest figure in 2022 behind the Dodgers' 33 percent.

+5: The infield's outs above average in July after it was an abysmal -20 in May.

1: The number of errors the Phillies have committed since the August 2 trade deadline.

86%: The Phillies' odds of making the postseason, per FiveThirtyEight's projections.