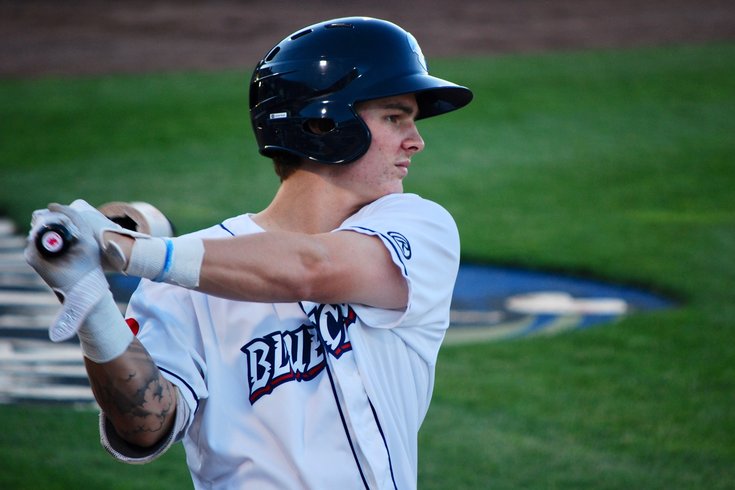 Mickey Moniak is less than a year removed from making his pro debut but has already displayed growth as a hitter as a teenager in the Sally League.

This sounded like a great idea when I brought it up at a staff meeting over the winter.

Sure, this will be easy, update the progress of the many top prospects in the Phillies system somewhat regularly through power rankings! Not a problem at all, plus, fun!'

This really isn’t easy at all, or at least not as simple as it seemed when we rolled out the initial Phillies Prospect Power Rankings a week before camp broke in Clearwater, Fla.

But the thing to keep in mind here – at least this is what I try to repeat to myself while figuring these out every few weeks or so – is that these are power rankings and not traditional prospect rankings. It's fluid.

It should be based more on the hot and cold streaks all players endure over the course of the five-month minor league season. The emphasis on such power rankings should be on the now and not necessarily on the individual ceilings and floors when these guys are final products in the coming years.

With that said, coming up with the top 3 or 5 has particularly proven to be a chore. When we began this, and even still today, we wanted to give credence to the overall player and his projectability and what he could become one day. But a lot of those guys have made it awfully tough to keep putting a top 5 number by their name when the time comes to put these lists together.

And so, of course, we’re putting a teenager on top this time around.

*All stats are through Sunday’s games

Moniak is less than a year removed from making his pro debut. But the combination of what we think he can be as a final product (yes, despite what we said above, it factored in here) and obviously how he’s played in the last month (again, the emphasis on these such lists) made him feel like a better selection than the 3-4 guys below him here. Moniak entered the weekend hitting .293 with a .358 OBP, and 12 extra-base hits (including two home runs) in his previous 25 games /109 plate appearances. This is almost twice as many extra-base hits as J.P. Crawford (seven) all season (56 games/244 plate appearances). Moniak is still growing, both physically and as a hitter, too.

Estimated Time of Arrival to Phillies: 2020

Has Hoskins slowed down some? Surely, although it was probably unfair to expect him to maintain what he did in the season’s first six weeks. Hoskins has slashed .209/.300/.384 with two home runs in his last 100 plate appearances over 24 games. Still, his strikeout/walk numbers (15/12) are those of an advanced, mature hitter. We still like the overall picture of what he’s done in his first two-plus months, which has him tied for the best OPS in the International League. 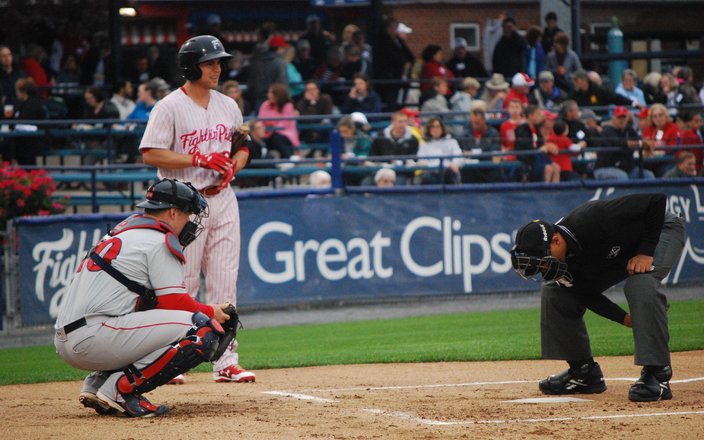 Speaking of leading your league … Kingery leads the Eastern League in home runs and ranks second in OPS and stolen bases. He has 12 more total bases than the next closest player (a player who happens to be a teammate that you’ll see later on this list). After banging out four hits on the first day of the month, Kingery entered a min-June swoon (.186 in an 11-game stretch). But then he collected six hits, including four doubles, in two of his last three games. We’d like to be more aggressive in his ETA, but if the Phils didn’t pull the trigger with Cesar Hernandez on the disabled list (or even promote him to Triple-A yet), it is … what it is.

We used this space last month to express our faith in Crawford, who by no fault of his own, has been labeled the top prospect in the Phillies system by almost every major publication for the majority of the last three years. He is still young, from a big picture standpoint. But Tuesday marks his one-year anniversary at Triple-A. And while it’s completely OK for him to continue to play there for the rest of 2018, Crawford has to do better than the .225/.322/.293 he’s slashed with 23 extra-base hits in his first 143 games with the IronPigs. He’s kind of a two-tool player at this point, like the guy playing above him. Only instead of a great glove and some pop, he has a very good glove and strong plate discipline. GM Matt Klentak spoke a bit about Crawford last week.

The teenage phenom (he turns 19 next month) missed a month with some neck soreness. But the Phils (smartly) are trying to limit his innings in his first full season, too. What did Sanchez do upon returning to the BlueClaws rotation? He hit triple digits on the radar gun. And he has allowed one earned run in two starts without walking a single hitter (in 10 innings).

Sixto Sanchez gave up one hit over five scoreless innings on Sunday in Hagerstown and gets the start for the BlueClaws tonight. pic.twitter.com/gL6urkuQK5

There are plenty of players in the Phillies’ system who run hot and cold and who have serious flaws that prevent you from going completely gaga over their respective talent. But there’s no more confounding player than Alfaro. His top tools are really fun: the power, the Pudge Rodriguez-like arm, the surprising foot speed for a catcher. But the plate discipline continues to be an issue and his defensive work still needs to be refined. Alfaro has had a nice last week (two home runs, two doubles, three walks, seven strikeouts) but he’s slashing .215/.257/.319 with two home runs, 46 strikeouts, and five walks in his las 144 plate appearances over 34 games.

After a disastrous start, Cozens is pretty much back to where he was last season when he hit 40 home runs in a breakout summer at Double-A Reading. After hitting .136 with 40 strikeouts in 90 plate appearances in April, Cozens is slashing .308/.369/.610 with 12 home runs, six doubles, and three triples in 43 games since the start of May. He’s even cut back his strikeouts (40 in 176 plate appearances over that time, compared to 40 in 90 PAs in April.) In contention with Williams for next-man-up when Howie Kendrick is traded at the deadline. 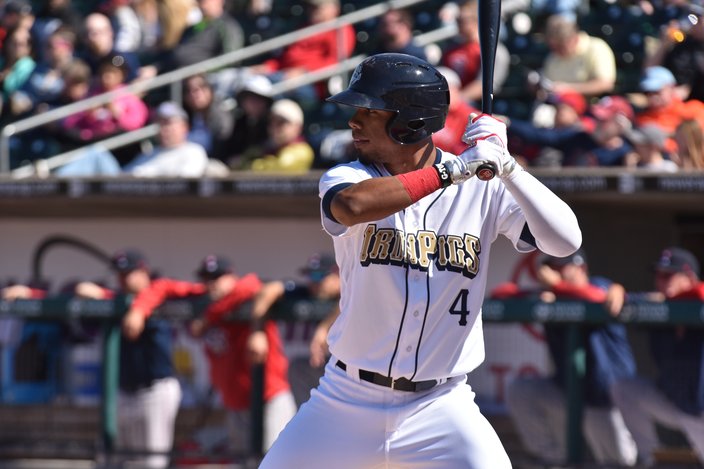 Nick Williams has 12 home runs in his last 31 games.

The Phillies really need one of the two bats they received in the Cole Hamels’ trade (Williams or Alfaro) to realize their potential. Williams, who turns 24 in September and is in his second season at Triple-A, has appeared to grow up quite a bit over the last 12 months. And now he’s hitting, too: .310/.339.681, 12 home runs in his last 116 at-bats over 31 games. He still strikes out a lot and rarely ever walks. But, eventually, it will be time to see what he can do at the next level.

The 2012 draft hasn’t yielded a single major league player yet for the Phillies, but there is a trio of names from that draft on this list: Cozens, Pullin, and the next name on this list. A fifth-round pick, Pullin has been the antithesis of nearly every other hitting outfield prospect in the upper levels: he’s been consistent. Since arriving at Double-A in 2016, Pullin has slashed .327/.381/.557 with 23 home runs and 32 doubles in 111 games (493 plate appearances). As for his ETA, we realize the Phils aren’t likely to promote three outfielders this summer and work them into the big league rotation, but, at some point, it’s not crazy to think Pullin would leap-frog the less consistent guys ahead of him, like Williams. 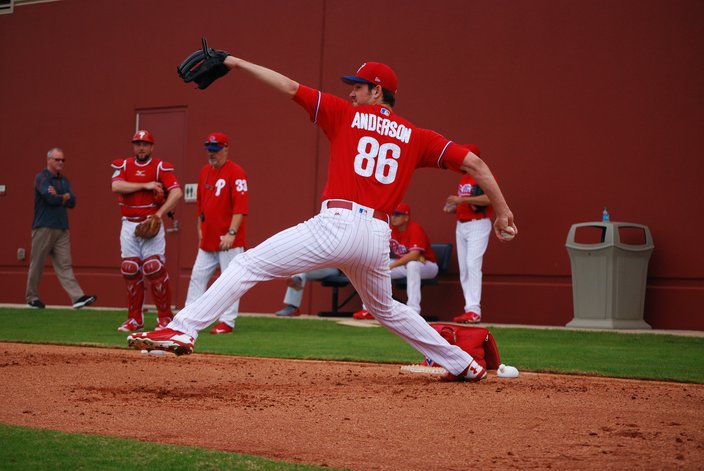 Drew Anderson has a 0.71 ERA in his last four starts with Double-A Reading.

He’s pretty much doing everything the Phils’ brass hoped he’d do when they decided to add him to the 40-man roster in November and protect him from the Rule 5 Draft. Anderson has a 2.66 ERA in 12 starts since his first of the season and held opponents to a .202/.273/.307 slash line during that two-month-long run. That’s pretty dominant. And he’s only gotten better: Anderson has a 0.71 ERA in his last four starts.

We caught up with the former 17th-round pick less than 48 hours before he was promoted to Triple-A. Therrien could be a breakout candidate in the Phils’ bullpen in the second half if he keeps it up. Successful big league relievers need command, a fastball that can at least climb into the mid-90s, and a deadly out-pitch. Armed with a wicked slider, Therrien has all of the ingredients.

Does he have the big arms of Adonis Medina, Seranthony Dominguez, or Franklyn Kilome? No. But Eshelman, a former second-round pick by Houston who arrived in the Ken Giles’ trade, is dominating at a higher level because he makes up for sheer stuff or the usage of an upper-90s fastball with command and pitchability. Eshelman has allowed more than two runs in one of his eight starts upon his promotion to Triple-A (he allowed 4 ER, gasp!). He has a 1.68 ERA in those eight starts, has yielded just two home runs in 59 innings, has a 40-6 strikeout-to-walk ratio, and has held opponents to a .210/.230/.294 slash line. Yup, that’s enough for a spot on this list.

Three who just missed: We’ll list a trio who could jump in here in the next rankings, once they begin playing in Williamsport/wherever. OF Adam Haseley, RHP Kevin Gowdy, 3B Cole Stobbe.

Next up: RHP Mark Appel. You just have to think he makes a major league appearance at some point in 2017, given that he’s on the 40-man roster and turns 26 next month. Appel still walks way too many batters but is 2-1 with a 2.38 ERA in his last 4 starts at Triple-A Lehigh Valley.

Those Lakewood arms, though: We wrote about these guys early on and they really haven’t slowed down in the last six weeks. The quintet of left-handers JoJo Romero, Ranger Suarez, Nick Fanti, and Bailey Falter, and hard-throwing right-hander Adonis Medina are a combined 19-11 with a 2.46 ERA, 1.07 WHIP, 337 K, and 93 BB in 325 1/3 innings over 57 games. Sanchez is still easily the top talent in the BlueClaws rotation, but any of these guys is deserving of a spot in the above power rankings, really.