The winning city's politicians gets a spread food from the loser. The Astros' hometown is putting up barbecue, kolaches and tacos vs. our cheesesteaks, Tastykakes, soft pretzels and water ice 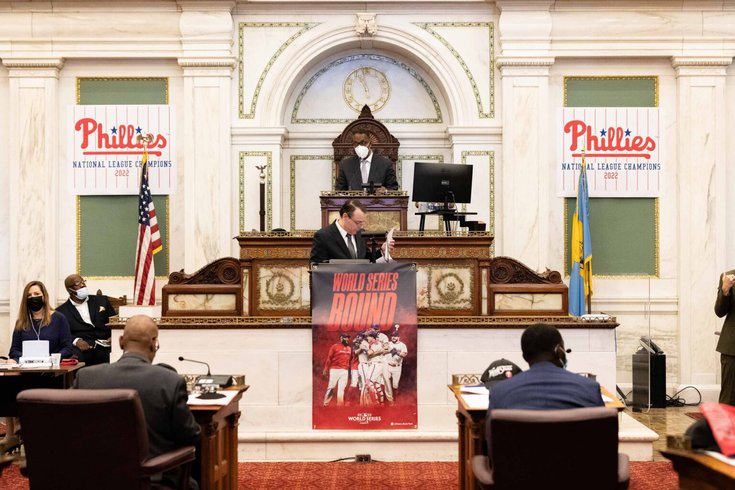 The Philadelphia and Houston city councils are betting on the Phillies-Astros World Series. The politicians from the city with the losing team will send a spread of local delicacies to the winning city's leaders. Philly council members proposed the bet Thursday, during their weekly meeting, amid the council chambers decorated with Phillies posters and signs.

Philadelphia City Council opened their weekly meeting on Thursday in a transformed chamber. The room was awash in red as Phillies placards and posters adorned each council member's desk. World Series baseball caps rested atop each one, too, when they weren't on the heads of the outwardly giddy council members.

Before diving into the day's agenda, the council waved red towels in the air, cheering on the National League champion Phillies, who face the Houston Astros in Game 1 of the World Series tonight.

It’s #RedOctober here in City Council Chambers! @PHLCouncil is ready for the #Phillies to win the World Series. pic.twitter.com/QexKlquFi9

The team spirit didn't stop there, as the council later introduced a formal resolution "honoring the Philadelphia Phillies for winning the 2022 National League Championship." The resolution also included a proposed bet with the Philadelphia politicians counterparts in Houston.

"On behalf of our fighting Phils and the city of Philadelphia, we do hereby challenge the city of Houston's council to step up to the plate," Councilman Curtis Jones said in the meeting. "We are putting forth our Tastykakes, our cheesesteaks, our soft pretzels and water ice against whatever treasure they may offer."

Just before 6 p.m. Thursday, Philadelphia City Council got its response: The bet was on. Amy Peck, a Houston City Council member, posted a video to Twitter outside a Halloween charity event with some of her colleagues, accepting the wager.

"If we lose, we're going to send you barbecue, kolaches and tacos!" Councilwoman Carolyn Evans-Shabazz says in the video. "But since we won't, we love cheesesteaks."

Houston City Council took a break from our Halloween charity event to accept the challenge from @PhiladelphiaGov City Council! We can’t wait for our cheesesteaks when the @astros win the World Series! @houdistrictg @salliealcorn @tarshajackson @RobertGallegos_ @PollardforHTX pic.twitter.com/CxSHmjEHmn

City Council isn't the only Philadelphia institution swept up in Red October and backing it up with some friendly wagers.

According to the release, Alley Theatre has accepted the challenge.

Philabundance likewise announced a fundraising challenge with the Houston Food Bank. There are actually no losers here because the money raised by both organizations goes to feeding people in need, but in the spirit of the World Series, the CEO of the organization that raises less money will have to wear the team gear provided by the winning organization, per a Philabundance press release. The food bank is now accepting donations for its Strike Out Hunger campaign.

Philabundance conducted an identical challenge with the Feeding San Diego when the Phillies played the Padres in the NLCS, winning with a $16,944 donation tally.

Update: Philadelphia beat us on and off the field last weekend. We extend a hearty congrats to @philabundance for raising more to #strikeouthunger. But really, if ending hunger were a game, we know we're all on the same team.

Thank you to everyone who participated!