The MSC Gayane was raided in June 2019, marking one of the largest drug seizures in U.S. history 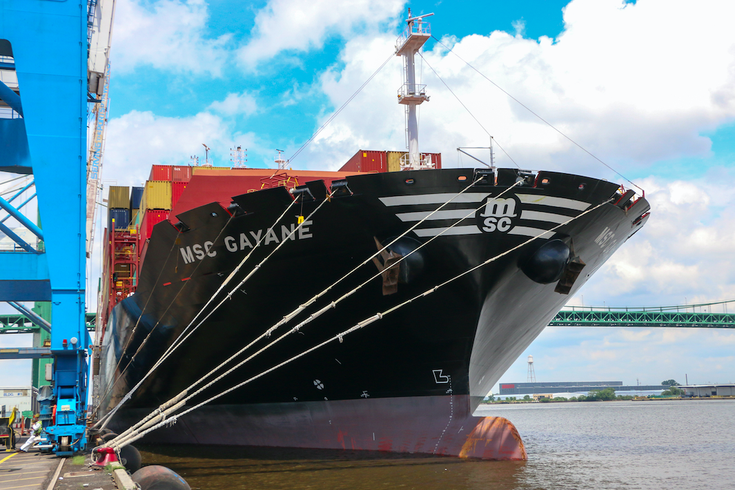 Nearly 20 tons of cocaine was seized from the MSC Gayane at the Port of Philadelphia on June 17, 2019. The shipping vessel was stopped by authorities at the Packer Marine Terminal. Eight crew members have pleaded guilty for their involvement in the smuggling scheme.

A crew member on a ship that attempted to smuggle 20 tons of cocaine into the United States through the Port of Philadelphia in 2019 will spend more than five years in prison, federal prosecutors announced Tuesday.

Vladimir Penda, 27, of Montenegro, was sentenced for his role in the scheme as an engineer aboard the MSC Gayane, a shipping vessel that was stopped by authorities at the Packer Marine Terminal on June 17, 2019.

Investigators found nearly 20 tons of drugs (about 39,500 pounds) valued at approximately $1 billion, making the bust one of the largest in U.S. history.

Penda worked on MSC Gayane during the first half of 2019, helping other crew members load bulk packages of cocaine delivered by speedboats at night during its voyage. The drugs were stashed in shipping containers, hidden among legitimate cargo, and the crew used fake seals to reseal the containers.

The ship's previous ports of call were the Bahamas on June 13, Panama on June 9, Peru on May 24 and Colombia on May 19. Other crew members admitted they helped load cocaine onto the vessel off the west coast of South America on at least two occasions.

"The follow-up investigation uncovered dark-of-night, clandestine drug trafficking conduct which read like a movie plot, and prosecutors in our office have been working non-stop since then to pursue justice in this case," Acting U.S. Attorney Jennifer Arbittier Williams said. "With Mr. Penda’s just sentence being handed down today, this chapter of the MSC Gayane saga is now coming to a close."

Seven other crew members from the MSC Gayane have pleaded guilty to federal charges for their participation in the operation.

Penda's sentence includes five years and 10 months in prison and two years of supervised release. He was charged with conspiracy to possess with intent to distribute five kilograms or more of cocaine on a vessel subject to the jurisdiction of the United States.

The MSC Gayane was temporarily seized by customs officials in the weeks following the drug bust, becoming the largest vessel taken by the agency in its more than 230-year history.

The ship is owned by Mediterranean Shipping Company, a Swiss firm that boasts the world's second-largest shipping line in terms of vessel container capacity. Another of the company's vessels, MSC Desiree, had been involved in another large drug bust in Philadelphia in March 2019, though customs officials have said these smuggling schemes have more to do with routes than particular shipping companies.

"The many successful prosecutions following CBP’s record-setting cocaine seizure of June 2019 should serve as a reminder to those willing to help drug trafficking organizations that narcotics smuggling has very serious consequences," Keith Fleming, acting director of field operations for CBP’s Baltimore field office, said. "Customs and Border Protection and our law enforcement partners remain steadfast in our commitment to intercept shipments of dangerous drugs before they can be smuggled through our nation’s borders."