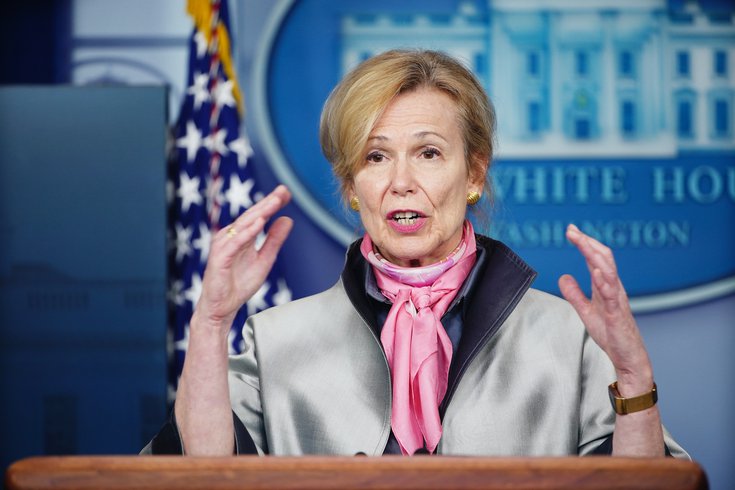 The White House Coronavirus Task Force coordinator said on Wednesday that Philadelphia could become one of the next coronavirus "hot spots" in the U.S.

Dr. Deborah Birx listed Philly among three major U.S. cities that could begin to see spikes in numbers of people testing positive for the coronavirus next, during an interview on Good Morning America.

Without citing specific numbers for Philadelphia or Washington, D.C., and Baltimore, Birx said the conclusion was based on data compiled for large metropolitan areas.

During Wednesday's daily briefing for the city, Philadelphia Health Commissioner Dr. Thomas Farley said the city's data is not leading local officials to the same conclusion.

"Philadelphia, like other large cities in the Northeast, has been hit hard by the epidemic, with New York City clearly being the epicenter of the epidemic," Farley said. "I doubt (Dr. Birx is) looking at numbers as updated as we are. I'm glad she's concerned about Philadelphia, but at the moment, things are looking a little bit better."

Hot spots are locations, usually defined by county boundaries or metropolitan areas, with the highest number of coronavirus cases per resident. New York and New Jersey currently are considered the top hot spots in the United States with both the most infections overall and per capita.

Pennsylvania Gov. Tom Wolf said during his briefing Wednesday that Vice President Mike Pence has informed him the state will be receiving personal protective equipment and ventilators from the federal government to help health care working combating the coronavirus outbreak in Southeastern Pennsylvania.

"While it's not good news that Philadelphia and the Southeastern part of the state is seen as a hot spot, it is going to be helpful in terms of getting more attention from federal resources – and that's a good thing," Wolf said.

Philadelphia has had more than 4,700 people diagnosed with COVID-19 and 78 related deaths as of Wednesday. In the Washington, D.C., metropolitan area, there are more than 9,000 cases and have been nearly 200 deaths.

Among the areas of the country showing encouraging signs of recovery, Birx pointed out two of the earliest regions to affected by the coronavirus pandemic.

"All of our previous areas seem to be steady at least," Birx said. "We're looking very carefully at California and Washington to understand how they've been able, as a community of Americans, to mitigate so well."

Earlier this week, Philadelphia announced that its South Philly coronavirus testing site, which was being funded in part by the federal government, is shutting down as its federal aid ends. The site's last tests will be conducted Friday,