Will people boycott the organization over one man’s politics? 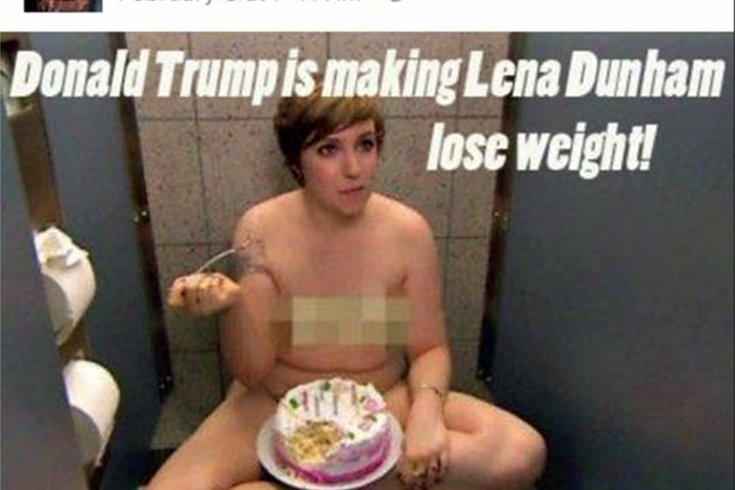 Chuck Volz posted this meme of actress Lena Dunham on his Facebook page. Some in the LGBT community say such posts run contrary to Philly Pride's message of inclusiveness. “I’m sorry if people got offended,” Volz says. “But not everyone in the gay community thinks the same way.”

Last week, a post on the closed Facebook group “Philly Queer Exchange” ignited a heated discussion among the city’s LGBT community. Originally shared on February 25, it said, “uh…the senior advisor to Philly Pride is an ardent Trump supporter, and his facebook (sic) is public. EDIT: What now?”

That Facebook page belongs to Chuck Volz, a more-than-20-year volunteer for Philly Pride Presents, the umbrella organization that produces Gay Pride every June at Penn’s Landing and Outfest each October in the Gayborhood. Volz was publicly outspoken about political matters on his page before changing his settings to private after he says he received several “nasty” comments, including one that suggested he would be dead soon anyway.

“I do understand,” said Volz. “People regard people with opposing viewpoints as a threat.”

Volz, a well-known figure in the LGBT community, doesn’t believe his conservative viewpoints should have any impact on the work Philly Pride does for the community. As senior adviser to the organization (an honorific title, he explains) he spends much of his time dealing with event logistics, selling wristbands and setting up tables. He was instrumental in outlining the space at Penn’s Landing, and even caring for trees and other details in advance of the big celebration each summer. 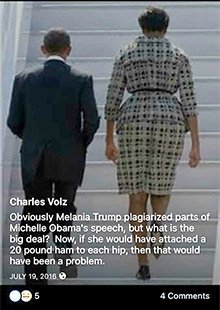 Despite his impeccable record of volunteerism and notable relationships with major community leaders, some critics say that some of his posts – he makes fun of Michelle Obama’s hips and actress Lena Dunham’s weight – are insensitive and inappropriate for someone in his position.

“I’m sorry if people got offended,” said Volz. “But not everyone in the gay community thinks the same way.” Volz, a lawyer and teacher, says he’s passionate about his opinions, and questions how far people will ultimately go in censoring free speech.

Archana Kaku, a political science student at University of Pennsylvania, has been very vocal about Volz’s Facebook posts.

“I think that everyone has a responsibility to consider what they post on social media,” says Kaku, “not because they'll get fired or because of some other concrete reason, but because presumably you post things you believe in. If you believe it enough to post it on Facebook, you should be willing to defend that position when confronted about it.”

Kaku says she is alarmed by the content of the Volz posts, especially since many of them target women and applaud Trump’s recent efforts to ban immigrants from predominantly Muslim countries. She sees this as being antithetical to Philly Gay Pride.

“I don’t want to make an excuse, but I know what Chuck has done for the community.” – Franny Price, executive director of Philly Pride, on why she won't ask ask Volz to step down

Joseph Hallman, a local artist in the LGBT community, was among the few dozen people who chimed in online to criticize Volz.

“I think the racist and misogynist views presented in not only the photos and memes he has shared, but his commentary as well, run counter to the mission of Philly Pride and the advancement of LGBTQ rights,” says Hallman. “His comments are anti-black, anti-woman, and destructive to the goals of the Philly Pride organization and to the community at large. This is clearly unacceptable.”

But Franny Price, executive director of Philly Pride, defends Volz, saying he has dedicated more than two decades to upholding LGBT rights in Philly, often using his own money and time to make the annual events successful. Volz and Price are close friends who have been working together since the 1990s, and she has no intention of asking Volz to step down, she said.

“I have been skeptical of Philly Pride for a long time. I think many of us have experienced that Pride really is about CIS white men, and the rest of us are just along for the ride (if that).” – Archana Kaku, Penn student

“I can’t tell him what to do with his Facebook,” said Price during a sit-down at Toast on 12th Street in the Gayborhood. She said that Volz has been a longtime proponent of transgender rights. He was instrumental in ensuring that the bathrooms used during Philly Pride were unisex long before most people were even having a conversation about transgender bathroom policies. He was also instrumental in opening the files on the death of transgender woman Nizah Morris, an issue for which he’s especially passionate.

“I don’t want to make an excuse,” said Price, “but I know what Chuck has done for the community.”

For his part, Volz says he uses Facebook to “poke fun” at things that people might take too seriously. As a vocal Trump supporter, and self-described libertarian, he sees no conflict of interest between his views and those belonging to most of the people who volunteer for Pride. He admittedly stands out as a conservative on issues like abortion, though he says his opinions have nothing to do with the work he does for Pride and Outfest.

“Let our opponents stereotype us,” says Volz. “It’s important for us not to stereotype ourselves.”

Volz actually encourages people who are upset with his posts to volunteer for Pride in June and get to know him and the other volunteers with the organization.

“My politics are out of step with the majority of the community,” he says, “but it lies in our diversity.”

But that’s not enough for Kaku, who says she’s concerned that Volz is an exclusionary voice.

“I have been skeptical of Philly Pride for a long time,” she says. “I think many of us have experienced that Pride really is about cis-white men, and the rest of us are just along for the ride (if that).”

Calling Volz’s Facebook posts “egregious,” she says, “If Volz remains affiliated with Philly Pride, that would prove to me that the organizers are not ignorant, but genuinely do not care about the constituency they claim to represent. That would be the last straw for me.”

Will people boycott Pride over one man’s politics? His critics have not confirmed whether that would happen, but it’s certainly a possibility.

“What is now cautious ambivalence toward Pride would definitely turn into a total opposition,” says Kaku. “Volz’s affiliation with Pride says loudly and clearly that immigrants, women, trans folks, and people of color are not wanted and not welcome. That's unacceptable.”