Please don't let dumb teenagers like me trick or treat

Defying social norms and acceptable behavior for a human in his late teens, I terrorized the small Pennsylvania town of Northampton in high school by continuing to trick or treat as – get this – "Naked Man," a costume for which I would don only a pair of underwear I had gotten on a family vacation to Italy that made your torso look like the statue of David's man parts.

It was incredibly unfunny and immature, encouraged only by my dumb, adolescent attention cravings and my equally dumb, adolescent friends, who served as provocateurs to my often lowest-common-denominator shenanigans. 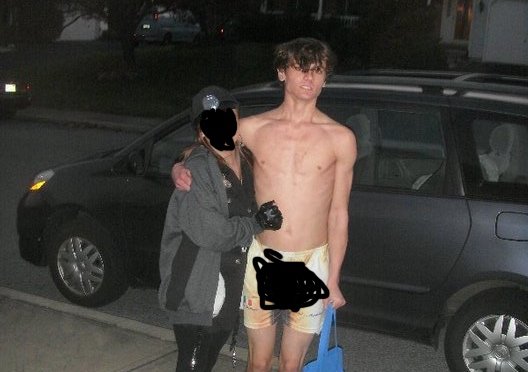 The author in his stupid costume.

Am I proud of this? As you can gather from the first two paragraphs, certainly not. But as a presumably matured 25-year-old, who still possesses those attention cravings with a little more impulse control, I don't necessarily blame myself.


I was a stupid teenager. Teenagers, by nature, are stupid. They're obsessed with pranks. They’ll even get arrested for the sake of them. The male ones like drawing phallic imagery on just about everything they can get their hands on. They smoke cigarettes behind the school and ask you if you want to do the pot, or something like that.

More importantly, they can be mean. John Mulaney delivered some comedic truth when he said of 13-year-olds: "(They're) the meanest people in the world. They terrify me to this day. If I'm on the street ... and I see a group of eighth-graders on one side of the street, I will cross to the other side of the street. Because eighth-graders will make fun of you but in an accurate way. They will get to the thing you don't like about you."

As someone with younger cousins, this is pretty much right on the nose for most between the ages of 13 and 18, as I have been teased in ways by younger relatives that make any professional or personal insult in adult life seem like child's play. I love them, but they know how to burn.

The worst thing you can do is give a teenager a blank check, because they will find ways to exploit the simplest of things like lip balm and hot pockets. Permission to put themselves in a costume and go door to door asking for things is that blank check.

Yes, some will be perfectly fine and polite. And some will do mean things like take all the candy from the bowl when they're only supposed to take one or make small children and their parents uncomfortable with snickering and cruelly accurate remarks. And some will do something stupid like dress up as Naked Man.

This reality of teenage behavior, which most of us were guilty of back in the day, is what's lost over the recent re-emergence of the conversation about whether there should be an age limit for trick-or-treating after a Canadian town set the cap at 16 years old and threatened to levy a $200 fine against anyone older found in costume going door to door.

To that I say, go even further! Set it at 13, and enforce the heck out of it. Make 'em pick up trash on the weekends in their costumes to shame them.

Teens know how to ruin things. Don't believe me? In the not-so-distant past, they literally set Camden on fire on Mischief Night, the informal holiday before Halloween that already gives teens permission to do the dumb things they're going to do anyway.

This is in no way an anti-teens-being-teens position. But they already have the mall and Wawa and the boardwalk to hang out at and plot their next move. We should protect the things that still inspire a child's wonder, like dressing up as your favorite superhero, animal or cartoon character and going to your neighbors, who magically provide you with candy.

Teens are stupid. I was stupid. In the name of all things holy, don't let us trick or treat.