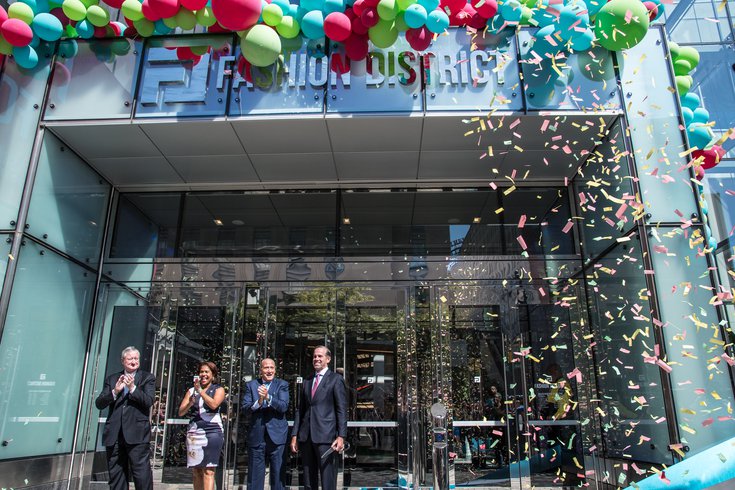 Fashion District Philadelphia is among 21 malls in nine states owned by PREIT, which filed for bankruptcy this week as part of a financial restructuring plan. The image above shows Mayor Jim Kenney and others attending the shopping centers grand opening in September 2019.

The owner of Fashion District Philadelphia and several other malls throughout the region has filed for bankruptcy as part of a move to restructure its business.

PREIT, short for Pennsylvania Real Estate Investment Trust, had indicated in October that its properties were struggling because of the COVID-19 pandemic. The company made a restructuring proposal to its lenders, hoping to avoid filing for bankruptcy, but ultimately did so after receiving 95% backing for its plan.

The bankruptcy filing announced Sunday ensures that PREIT's properties can continue to operate without disruption as it finalizes the restructuring.

"We are pleased to be moving forward with strengthening the Company's balance sheet and positioning it for long-term success through our prepackaged plan. We are grateful for the significant support we have received from a substantial majority of our lenders, which we expect will enable us to complete our financial restructuring on an expedited basis," said Joseph F. Coradino, CEO of PREIT. "Today's announcement has no impact on our operations – our employees, tenants, vendors and the communities we serve – and we remain committed to continuing to deliver top-tier experiences and improving our portfolio."

PREIT owns 21 properties in nine states and has sold off several malls in recent years, including the Phillipsburg Mall in New Jersey and the Palmer Park Mall in Easton, Pennsylvania.

Among the properties PREIT owns in the Philadelphia region are the Cherry Hill Mall and Moorestown Mall in South Jersey and the Willow Grove Park Mall, Plymouth Meeting Mall and the Fashion District, the multiyear renovation of Philadelphia's former Gallery at Market East that held its grand opening in September 2019.

PREIT reported a net loss of $29 million in the second quarter of this year, following coronavirus shutdowns and decreased shopping among consumers after malls reopened. In September, the company received a stock delisting notice from the New York Stock Exchange after its share price fell below the $1 threshold.

Under the bankruptcy filing, PREIT will list some of its properties as collateral for debt and for the $150 million in new lending it has received.

"With the overwhelming support of our lenders, we look forward to quickly emerging from this process as a financially stronger company with the resources and support to continue creating diverse, multi-use ecosystems throughout our portfolio," Coradino said.