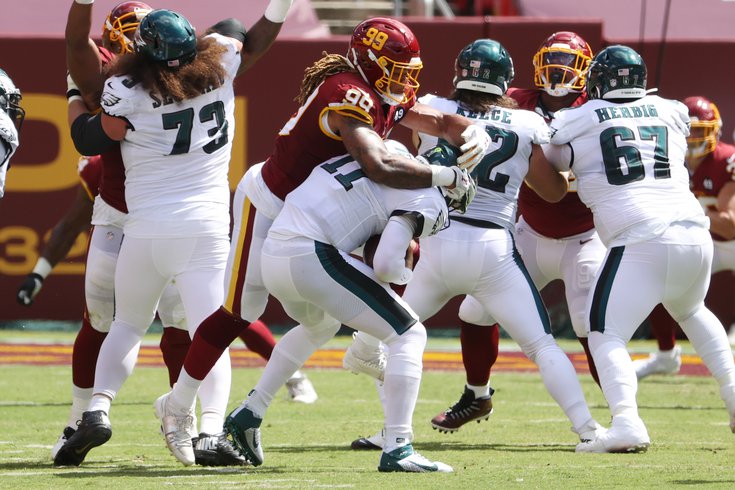 Chase Young was good as a rookie. He'll be better in his second season.

Here's the offense edition from Monday, in case you missed that. Here we'll cover the defensive side of the ball.

Unless we're counting Leonard Williams, no NFC East edge rushers had double-digit sacks in 2020. Young had 7.5 sacks with four forced fumbles, while Sweat had nine sacks with two forced fumbles. In a division in which there wasn't an ultra-productive edge rusher, give me the physical and athletic upsides of already good young players in Young and Sweat.

As noted above, we maybe could have put Williams in the edge rusher group, but he lands here. He had 11.5 sacks in a contract season in 2020, so, you know, good timing for him to break out. Football Team fans might view Jonathan Allen's omission as a snub, and obviously he's a very good player, but he doesn't have the same splash play ability as Williams or Cox. Allen has zero career forced fumbles. I had to check two different websites to verify this was correct. He's a second-team guy, for now.

Martinez felt like an overpay in free agency a year ago, but he proved that to be wrong in 2020, racking up 151 tackles (not out of the ordinary for him), and playing better in coverage than he had in previous seasons.

As for Parson's inclusion, I know some will have a problem with a rookie making it, but, I mean, what other linebacker in the NFC East would you rather have this season instead?

Like Martinez above, Bradberry was a good free agent signing with the Giants last year, earning his first Pro Bowl nod.

Slay got cooked in a couple games (vs. Davante Adams and DK Metcalf), but he also probably had the most difficult assignments in the division over the course of last season.

After Landon Collins went down with a torn Achilles last season, Curl became the starter as a rookie seventh-round pick, and was an upgrade. He was one of the steals of the 2020 draft, collecting 88 tackles, 3 INTs (including a pick-six), 4 PBUs, 2 sacks, and 5 QB hits. This offseason, there are some depth charts out there that don't even have Curl as a starter because Collins will be back, and is expected to re-take his old starting job. Curl is better, in my opinion, and shouldn't have to lose playing time because a lesser player is on an $84 million contract. Ron Rivera and MagaJack Del Rio have to find a way to keep Curl on the field as a regular.

Otherwise, Peppers is fine, I guess. In case you hadn't noticed, safety is a weak positional group in the NFC East.