Puerto Ricans in Pa. could determine election, but neither Trump, Biden has endorsed island's bid for statehood 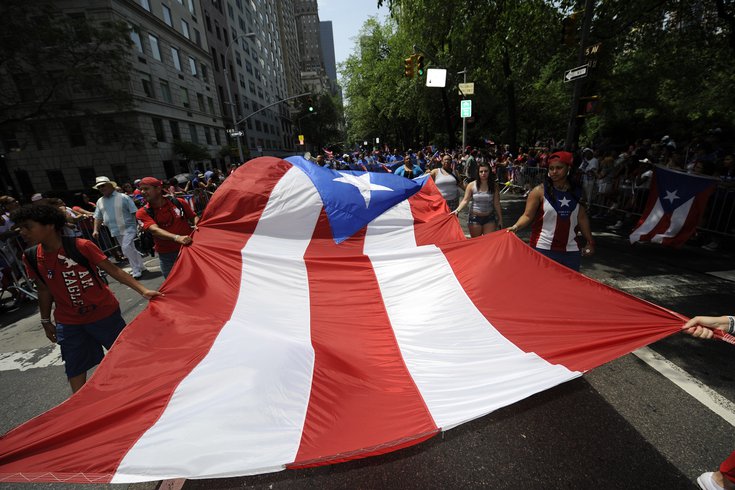 On Election Day, people in Puerto Rico will vote on whether the island should become the 51st U.S. state. That would also require support from the federal government to happen and neither Donald Trump nor Joe Biden have expressed unequivocal support for such a move. In the file photo above, the Puerto Rican flag is displayed during a 2012 in New York City.

Given that President Donald Trump won the state by less than 45,000 votes in 2016, and there are more than 120,000 Puerto Rican voters in Philadelphia alone, these voters could wield enough influence to decide whether the state swings to Democrat Joe Biden or goes for Trump again.

One of the key factors that will influence many voters' decisions is the political status of their home island.

As Puerto Ricans wield their significant political power in Pennsylvania and head to the polls to vote in the presidential election, those living on the island – who are also U.S. citizens – are ineligible to vote in the presidential election at all. This is despite the fact that they must abide by the rules and regulations promulgated by the U.S. federal government, no matter who is in the White House.

One of the founding principles of our country is a government "by consent of the governed." That is why we vote for our representatives to establish policies on our behalf. But the 3 million people in Puerto Rico have been relegated to second-class citizen status, unable to vote for their president and without voting representation in either the House or Senate.

On Nov. 3, for the third time in less than 10 years, Puerto Ricans are going to the polls to vote on the status they would prefer for the island. Voters will be asked a straightforward question: "Should Puerto Rico be admitted immediately into the Union as a State? Yes or No?"

With previous statehood elections in Puerto Rico, those who opposed the effort argued that the results should be invalidated because of the complicated nature of the question on the ballot or low voter participation because most Puerto Ricans failed to participate. The numbers show that people want something different than what they have now. Puerto Ricans want self determination to vote for what they want.

Becoming a state would allow Puerto Ricans on the island to have an equal voice in the laws and regulations they have to live under, as the Puerto Ricans in Pennsylvania already do, while also increasing economic opportunities on the Island.

The latest polls show the former Vice President Biden with a slight lead over President Trump in the critical Keystone State, but the race could still be won by either candidate. The Puerto Rican bloc will play an important – if not decisive – role in the coming election, and both candidates would be wise to pay careful attention to the statehood issue in the final days before Tuesday's election.

Trump and Biden would be wise to issue their unequivocal support for statehood, not only because it is the right thing to do, but given the political power of Puerto Ricans in the state, it could mean a difference between a win or a loss in Pennsylvania – and potentially the presidency.

As voters head to the polls and vote in Pennsylvania, Puerto Ricans on the island will vote on whether they should become the 51st state. If, as expected, the island votes in favor of statehood, it is critical that our elected officials who have a vote and a voice in Congress respect the will of the people and take action to honor the wishes of the 3 million Puerto Rican American citizens on the island.

Otherwise, not only will our elected officials be on the wrong side of history, they could also be putting themselves at risk of being out of office next time they are on the ballot.