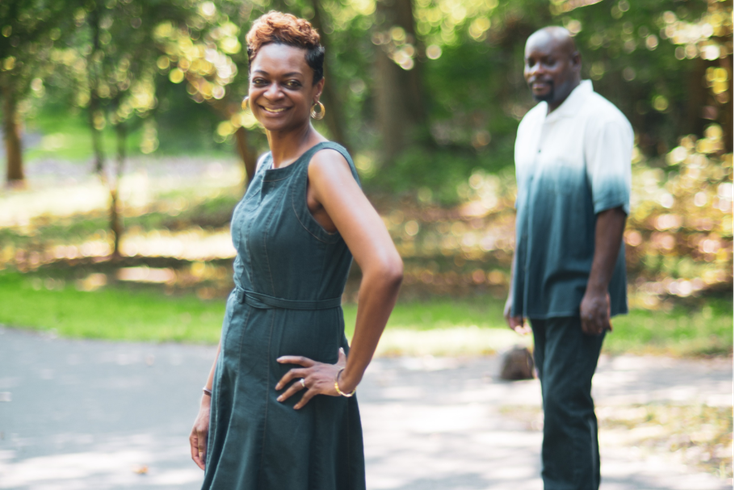 Carlette Burton, pictured with her husband Chris, says doctors did not advise her family to complete genetic testing when her mother was diagnosed with breast cancer in her 30s. Now, Burton is sharing her own cancer story in hopes of reducing racial disparities in genetic testing.

Carlette Burton knew she had a family history of cancer, but she never looked into her genetic risk for BRCA-related cancer until she found a concerning lump in her breast during a self check in November 2009.

At the time, Burton was busy raising her son and caring for foster children. So she didn't get a mammogram until December and her official diagnosis did come back until 2010. She was 34.

Burton's mother also had been diagnosed with breast cancer in her 30s. Her grandmother had had breast cancer too. But at the time of her mother's illness, she and her four sisters were just focused on getting the best treatment for their mother — not on their own potential risk for the disease.

"We never really knew what the options were. We didn't look into it," said Burton, who lives in Delaware, but grew up in West Philly. "We were just immersed in our mom's care. She had other cancers as well."

After her own diagnosis, Burton had genetic testing done at the Penn Medicine Basser Center for BRCA, including the test for the BRCA mutation — which it turned out she has. To treat her cancer, she underwent a bilateral mastectomy — the removal of both breasts — as well as chemotherapy and radiation.

Now 45, Burton is being treated for metastatic breast cancer, but she said she remains optimistic. And because of her own journey, she is joining her voice with doctors at the Basser Center in an effort to decrease racial disparities in genetic testing for breast cancer.

"I think we need more genetic testing and transparency in family history," she said. "Culturally, African Americans don't talk about what type of cancer someone has or the type of treatment they are receiving. Family issues are a taboo topic. It is unfortunate because it limits what families understand about cancer risk.

"There is a disparity in the knowledge of what is available and what is known. In early 2000s, it wasn't talked about as much in our culture. We didn't go into detail about illness."

Looking back, Burton said she is surprised that none of the doctors who treated her mother suggested the family be tested.

"Doctors knew she had five beautiful girls, but I don't ever recall a doctor saying we should get tested," Burton said. "There isn't enough talk spent on talking about family history or next steps. It is important when one family member is tested that the health system bring in the whole family to discuss the importance of genetic testing. It is a matter of being proactive instead of reactive."

The most common genes linked to breast cancer, if they mutate, are BRCA1, BRCA2 and PALB2. These genes typically support the normal production of breast cells and prevent any cancer cell growth. But when they mutate and are passed down from generation to generation, they no longer function properly and the risk of breast cancer increases.

These hereditary mutations can affect both men and women and are passed down from a parent. They increase a person's lifetime risk for cancer, including breast, ovarian, pancreatic, prostate and melanoma cancers.

Women who are BRCA-positive can reduce their risk by getting regular screenings to catch cancer early, making a cure more likely. They also can get a mastectomy or take preventive medicines, such as tamoxifen.

But without genetic testing, women won't know whether they have the gene, nor will their family members know to get tested.

According to a 2016 study published in the Journal of Clinical Oncology, Black women are less likely than white women to have their surgeons or oncologists recommend genetic testing. The study found that 26.7% of Black breast cancer patients completed genetic testing compared to 47.5% of white patients.

And among the patients who had genetic testing, Black women were less likely to be categorized as high risk than white women. Black women also were more likely to have had a first-degree relative (mother, sister or daughter) diagnosed with breast or ovarian cancer.

"It has been consistently shown in multiple studies that Black individuals are less likely to get genetic testing," Basser Center Executive Director Susan Domchek, who was involved with the study, told PhillyVoice. "Individuals with breast cancer who are Black also have higher mortality."

Some studies suggest the rate of BRCA mutations is the same for Black and white women, though others have shown it is higher among Black women.

According to one 2015 study, Black women may have a higher rate of BRCA1 or BRCA2 gene mutations than doctors previously thought. Approximately 12% of Black women with breast cancer tested positive for one of the mutations.

There are many possible reasons for racial disparities in genetic testing for breast cancer, Domchek said.

First, many doctors are not recommending it. And even if they are, Black patients are less likely to get tested. The reasons for that are complicated, Domchek said, but social determinants of health certainly play a role.

According to the U.S. Centers for Disease Control and Prevention, social determinants of health include discrimination, income and education levels, physical environment and access to quality of health services.

Genetic testing may pose a cost concern for some people, Domchek said, though most insurance providers will cover it.

"We hope people don't let cost concerns stop them from starting the process," Domchek said. "There are also privacy concerns about genetic information for both white and Black individuals, and also discrimination concerns. When you add it all together, it can impact genetic testing rate."

Disparities in preventive and reconstruction surgery

The Basser Center is the first comprehensive center for the research, treatment and prevention of BRCA-related cancers.

"We address common myths, provide tools to collect family history, and share stories from patients who look like them," Domchek said. "We are also partnering with local communities to enhance community engagement.

"We also need to work with doctors to make sure they are recommending genetic testing. Penn Medicine, which is located in West Philly, believes it is important to serve all of our communities to decrease disparities."

To reach women who might have difficulty coming into the office for testing because of work or child care responsibilities, the Basser Center also has started distributing at-home, genetic testing kits that simply require a quick spit sample. Thanks to this option, the center saw its volume go up, Domchek said.

Racial disparities also are found in the rate of women who have received preventive surgery or breast reconstruction. Studies have shown that Black women are less likely to undergo either type of procedure.

According to one study, Black women had the lowest rates of bilateral mastectomy (68%) and oophorectomy — the removal of ovaries and fallopian tubes (32%). That suggests more targeted follow-up efforts are needed.

"Anyone who has mastectomy should be offered breast reconstruction, no matter their race," Domchek said.