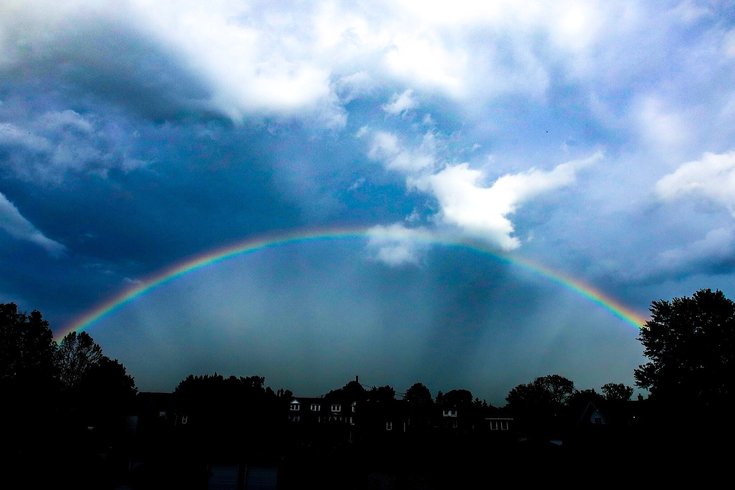 Spokes rainbow photographed in Quakertown, Bucks County, on May 10, 2019, by photographer Karl Diefenderfer.

The Philadelphia area has gotten a heavy dose of rain over the course of the past week, but a photograph out of Quakertown shows it hasn't all been a wash.

Photographer Karl Diefenderfer shared the photo below taken the early evening of May 10, when he spotted what's known as a spokes rainbow.

Diefenderfer, who shares his work on the EarthSky community, takes a variety of nature photographs for personal enjoyment. A spokes rainbow is an arc with bands of light appearing similar to the spokes on a wheel.

EarthSky, which featured Diefenderfer's photo as the image of the day on Tuesday, referenced a scientific explanation for the phenomenon from Les Cowley of Atmospheric Optics:

Shadows in the sky appear by perspective effects to converge towards the antisolar point, which is also the center of rainbows. When clouds or dense rain showers shadow the light falling into your rainbow cone the shadowed raindrops can no longer send the rainbow’s rays towards your eye. The result is one or more dark radial spokes centered on the antisolar point and making the rainbow sometimes resemble a wagon wheel. Bright spokes are similar to anticrepuscular rays except that light is directed into specific directions by large raindrops rather than widely scattered by dust and aerosols.

Sometimes, when clouds are moving fast across the sky, the rainbow wheel appears to rotate.

"I’ve been taking nature photos for as long as I can remember but truly got into the hobby of capturing events like this a few years ago," Diefenderfer told PhillyVoice on Tuesday. "This is the third rainbow with spokes that I’ve seen."

The photo was taken from Diefenderfer's backyard near the center of Quakertown, with a view of the eastern sky.

"I’ve been a frequent contributor to Earthsky ranging from the solar eclipse back in ‘17 to planetary conjunctions and lunar eclipses," Diefenderfer said. "I love sharing my images and maybe giving someone inspiration to put down their phones for a little and enjoy the world outside."

What they're saying: Eagles can still trade for Yannick Ngakoue, but it's now or never

What to know about hepatitis A, B, and C

Seven ‘superfoods’ to add to your diet