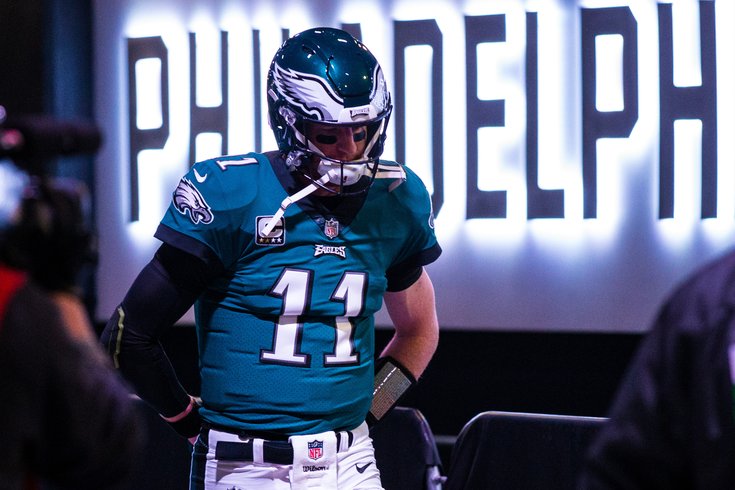 The Philadelphia Eagles have had mixed success in the NFL Draft, with some very good picks, and some awful ones as well. On Monday, we looked at the Eagles' worst 20 picks in the last 20 years.

Today we'll look at their 20 best picks over the last two decades.

1) 2016: Carson Wentz, QB, North Dakota State, first round: Wentz was the best player in the NFL during the 2017 season, before he tore his ACL and LCL against the Rams. At the time his season was over, he led the team to an 11-2 record, which put them in great position to wrap up home field advantage throughout the playoffs.

In my view, "best player in the NFL" remains his ceiling, as long as he can stay healthy. I mean...

The selection of Wentz was such a great one for three reasons:

Make no mistake -- While Nick Foles won Super Bowl LII, the Eagles very likely wouldn't have even been there if they hadn't traded up to get Wentz.

It's safe to say the Eagles picked the right one.

At his peak, McNabb was somewhere around a top-five quarterback, and he led the Eagles to a number of deep playoff runs, obviously never winning it all. But certainly, even with his foibles, McNabb was a great quarterback in his prime.

3) 2011: Jason Kelce, C, Cincinnati, sixth round: The 2011 NFL Draft was an absolute disaster for the Eagles, as four players from that class landed on our 20 worst picks of the last 20 years. The only thing saving that draft class from being among the worst in NFL history was Kelce, an undersized but extremely athletic center, who became the best player at his position in the league. Oh, and he gave the greatest speech in the city's history. Probably.

Ew. The Eagles by far and away got the best player in that group, even if they really wanted Dion Jordan. Tip of the hat to the Dolphins for trading up ahead of the Eagles and taking him off the board.

6) 2002: Brian Westbrook, RB, Villanova, third round: While LeSean McCoy is often considered the best Eagles running back ever, Westbrook was probably the most talented in his prime.

7) 2005: Trent Cole, DE, Cincinnati, fifth round: Cole is second on the Eagles' all-time sack list, with 90.5, behind only Reggie White. He was obviously a steal in the fifth round.

8) 2009: LeSean McCoy, RB, Pittsburgh, second round: As noted above, Shady was arguably the best running back in Eagles history, before Chip Kelly traded him away because he didn't like him.

9) 2008: DeSean Jackson, WR, California, second round: Jackson has more TD receptions of 60-plus yards (24 of them!) than any other player in the history of the NFL. His contributions as a deep threat with the Eagles were obvious, but he also was key in opening up the short to intermediate areas of the field because opposing defenses would often park their safeties 20 yards off the line of scrimmage.

He was a great player for the Eagles, until, you know, Chip Kelly cut him because he didn't like him.

10) 2013: Zach Ertz, TE, Stanford, second round: Ertz broke the single-season receptions record for tight ends in 2018. His selection in the second round was good value.

11) 2002: Sheldon Brown, CB, South Carolina, second round: The Eagles' 2002 draft was a great lesson in taking the best player available. In the first round, they took CB Lito Sheppard, followed by S Michael Lewis in the second round. With their second pick in the second round, they took WHAT(?!?) another corner in Brown, even though Troy Vincent and Bobby Taylor were on the roster, and still playing well. As it turned out, Brown was a good starter in the league for almost a decade.

13) 2007: Brent Celek, TE, Cincinnati, fifth round: Celek was an extremely tough player who refused to miss games, and a leader in the locker room. He is second all-time among tight ends on the Eagles' receiving yards list, for now anyway, as Ertz is going to blow right by him early in the 2019 season.

14) 2012: Nick Foles, QB, Arizona, third round: I really struggled with where to put BDN on this list, as I view him more as a great free agent acquisition than I do a great draft pick. If you think he should be higher (or lower), you'll get no argument from me.

As a draft pick, Foles did have that one magical 27 TD, 2 INT season, before he regressed and the team punted him to St. Louis along with a second-round pick for Sam Bradford.

Maybe we give extra points for the Eagles drafting him because his familiarity with Philadelphia helped his decision to return here as a free agent? Obviously, as a Super Bowl winning quarterback, I'm not leaving him off the list entirely.

15) 2010: Brandon Graham, DE, Michigan, first round: Graham would have made many a "worst draft pick" list for a number of years, as the Eagles selected him instead of Seahawks safety Earl Thomas. As it turned out, Graham became a really good starting defensive end who made the biggest defensive play in Eagles history.

16) 2009: Jeremy Maclin, WR, Missouri, first round: Many thought Maclin was a top-10-worthy pick, and when he slid to the late teens the Eagles traded up for him for a modest cost, despite having more glaring needs.

17) 2018: Avonte Maddox, CB, Pittsburgh, fourth round: Too soon? Yeah, maybe, but when the defensive coordinator says that he doesn't know where the team would be without the contributions of a fourth round rookie, that is a great start.

18) 2017: Derek Barnett, DE, Tennessee, first round: Barnett was a solid pick in the first round of the 2017 NFL Draft, who contributed immediately as a rookie, making a few huge plays in the playoffs. He was also off to a great start in his second season before sustaining a shoulder injury.

19) 2018: Dallas Goedert, TE, South Dakota State, second round: I think there is some logical wisdom in questioning the decision to draft another tight end this highly when the Eagles already had Ertz on the roster, but Goedert looks like he might be a really good tight end in this league, as he can catch, get yards after the catch, and is already a well above average blocker.

Credit the Eagles for correctly projecting that the skill sets of Wentz and Goedert would translate to the pro level from such small schools.

20) 2001: A.J. Feeley, QB, Oregon, fifth round: This isn't a joke. Feeley wasn't much of a player, but he serves as something of a poster child for the strategy of taking quarterbacks late in the draft, and then trading them for far more than what they are worth after seeing even the most mild hints of success in the league. Feeley had a few decent games at the end of the 2002 season, which was enough for the Dolphins to trade a second round pick (it would ultimately be 35th overall) for him.

In the last 15 years, the Eagles have traded away eight quarterbacks, and they usually ended up as the overwhelming winners of those trades.