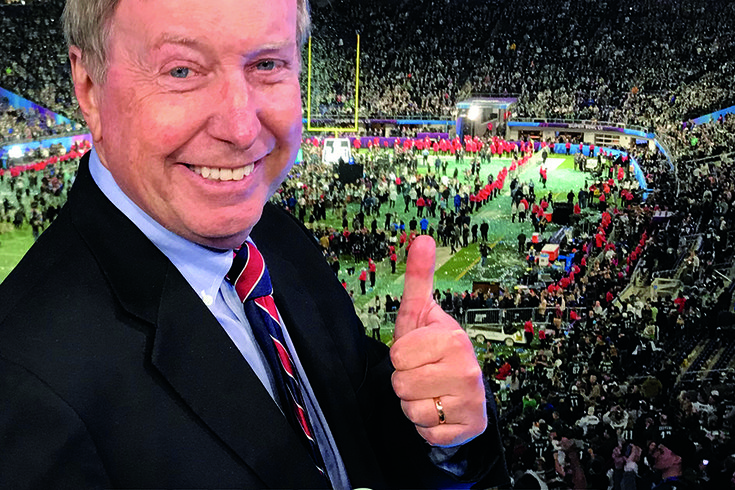 The Prince of the City’s sports soul would rather that you don’t call him that. He would much rather have you call him “Ray,” short for Ray Didinger.

The Hall of Fame sportswriter has been a constant conduit for over five decades, bringing sports fans everywhere from backstage at a WWE event with Sergeant Slaughter and the Iron Sheik, to rolling down Broad Street on the Flyers’ Stanley Cup parade route, to spitting verbal barbs at Larry Bowa, to looking down on U.S. Bank Stadium on February 4, 2018 to witness something Philadelphia sports fans never thought they would see — a Super Bowl championship.

Didinger covers it all and then some in his new book, “Finished Business,” published by Temple Press.

If you’re a Philadelphia sports fans of any age, it’s a tome that’s hard to put down.

And to think the area’s great gain can be credited to the Eagles winning Super Bowl 52.

“I don’t think the book would have happened if the Eagles didn’t win the Super Bowl,” said Didinger, 74, a six-time Emmy Award winner and five-time Pennsylvania Sportswriter of the Year. “Temple Press had talked to me about some kind of book around the 50th anniversary of my start in the business, looking back at my career around 2015, 2016.

“I fooled around a little bit and I started writing to see how it felt. I thought about trying it. I did a chapter, a chapter-and-a-half and I just wasn’t feeling it. I felt a little awkward writing about myself, and I got back to them and said. ‘I don’t think this is going to work.’ They said fine. Then 2017 comes, and the Eagles go on that run and they have that great season, and they go on and win that Super Bowl.”

That’s when Didinger had the moment with his son, David, hugging on the air after the game on Eagles Postgame Live, which resonated with every Eagles’ fan who could not share the moment with a loved one.

“All of a sudden, the book kind of paid off, and I thought about it, ‘Let me try it now,’” Didinger recalled. “The whole theme of ‘Finished Business’ made sense then, because I had seen the Flyers win two (Stanley) Cups, I had seen the Phillies win two World Series, and I had seen the Sixers win a world championship.

“The one missing piece was the Eagles. When they won, especially the way they won it, it gave the story a logical conclusion.”

Didinger is a bottomless reservoir of stories. He has witnessed a lot of games, in a lot of stadiums, and met a myriad of personalities along the way. What he couldn’t recall through memory he could always refer to the mountain of information from his famous yellow legal pads, and his innumerous chronology of files, upon files, upon files that have been built up over 50 years.

Writing about McDonald brought back many misty memories. Didinger had to cut himself off from everything around him, including his feelings to get through the chapter. You could almost see the tear drops on the pages as he would write a passage, grow emotional, get up and walk away to compose himself, then go back and do it again.

“What material I did have prompted my memory of the things that I didn’t have, and that formed the backbone of the book,” Didinger said. “I didn’t want the book to be all about me. What I wanted was the book to be about my life. Five or six years ago, I read Roger Ebert’s autobiography, ‘Life Itself.’ I thought it was brilliant, and I was a big fan of Ebert’s writing.

“As I was reading it, I thought this is the way to do this, about his experiences and riding in a Hertz rent-a-car with Robert Mitchum. You were learning about him, and learning about all of these people, too. As was as it you were walking along beside him as he met these people. I thought if I was going to write this, that’s how I wanted to do it along those same lines.

“The chapter on Tommy and me was the hardest to write. That was clearly the most emotional, because it ended with me next to him while he’s literally in the bed dying and me holding his hand, with the two of us reliving our whole life together knowing it was coming to an end.

“Doing that justice was my hardest part. I had to turn my computer off and walk away.”

All of the chapters are engaging, though Didinger’s chapter on pro wrestling was out of character for him. It was intriguing, because it was a story Didinger openly admits he was reluctant to do. He went back and forth whether he wanted to include the chapter in “Finished Business.”

He’s happy — and the readers will be happy — that he did.

“It was actually a good thing, because it was clearly different and how many people really know what that world of professional wrestling is like,” Didinger said. “The beginning of the chapter is about me not wanting to do it. I fought against it. It was the only time in all of my years in the business when I actually had a fight with my editor.

“I argued that I didn’t want to do it. My editor let me know he’s the boss and that I had to do it. So, I went off and did it, grinding my teeth the whole way, but I found that it was interesting. On a human level, it was very interesting.”

The Associated Press bought it and the story appeared in over 200 newspapers across the country.

“There’s nothing fake about the toll it takes on their bodies.”

If Didinger had a favorite section, it was the Eagles chapter on winning Super Bowl 52. He recalls the whole season, the day of the Super Bowl and hugging his son after the game.

Just be aware of the time when you begin to read it, because chances are you’ll be late to wherever you’re going next.