The historic shipyard houses many businesses. But with some companies needing less office space, it has shifted its focus to residential and retail development 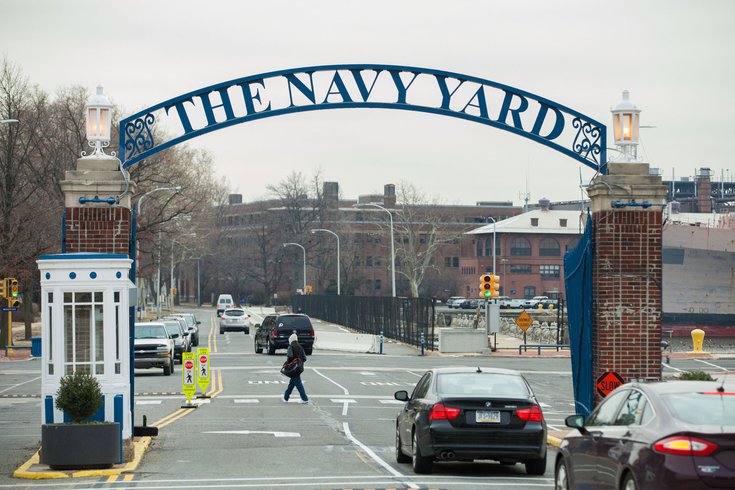 Rite Aid's corporate workforce has gone almost completely remote, but tomorrow the company is opening a new office space in the Philadelphia Navy Yard where virtual commuters can work together face to face on occasion.

Rite Aid's corporate offices have gone almost completely remote in the wake of the COVID-19 pandemic, but the company is opening a new hub in South Philadelphia where employees can meet face-to-face.

A ribbon-cutting ceremony held Wednesday for the company's new hub came just days after the Navy Yard, an historic shipyard turned office and industrial park, released a new 20-year plan. The $6 billion plan seeks to transform the 1,200-acre parcel of land into a mixed-use residential neighborhood.

Rite Aid has leased about 25% of the 92,000-square-foot building at 1200 Intrepid Ave., but it will not be a traditional workspace with offices and cubicles. Instead, the hub will serve as a place where the company's 2,800 remote corporate workers can collaborate in person.

The move was announced last September after an employee survey revealed that remote work was preferable for most, but that there was still a desire for occasional get togethers.

"We believe in remote work, and as we lean into it for the long term, we are investing in a physical footprint that will facilitate it," Rite Aid CEO Heyward Donigan said. "We think we've found the right balance between the flexibility of remote work and the power of on-site collaboration."

It will have a "unifying effect" on the company's corporate workforce, COO Jim Peters said.

"We welcome (Rite Aid) to our great city and look forward to working together in serving the health care services of our communities," Mayor Jim Kenney said.

The new offices won't replace Rite Aid's longtime headquarters in Camp Hill, Cumberland County, where many see the company's presence as a defining part of the community. Rite Aid will also keep a collaboration hub open there for the time being, a company spokesperson said.

Rite Aid is not the only new business that's opened in the Navy Yard recently.

TB12, an athletic training and physical therapy company owned by veteran NFL quarterback Tom Brady, opened a new location there earlier this year. So did Maho Construction, a firm which specializes in commercial carpentry.

The Navy Yard has managed to attract other major corporations in the past, like Urban Outfitters, which moved its headquarters there in the mid-2000s.

But it's recently lost big tenants, too. Pharmaceutical company GSK announced its plans to move into a smaller space in University City's FMC tower last year. The company's need for office space has dwindled, since many of its workers went remote during the pandemic.

Since the public health crisis began, the Navy Yard's focus has shifted from offices to residential and retail. The remote work revolution has seriously shrunk the demand for office space across the city.

Earlier this month, PIDC – the city-owned nonprofit that has owned the Navy Yard since 2000 – released a master plan to build 3,900 apartments and 235,000 square feet of retail space. Of the apartments, 15% will be offered at affordable rates and 25% of retail space will be subsidized for minority and women-owned businesses.

Last year, PIDC said it would add more than 600 new apartments and 26,000 square feet of retail at the Chapel Block mixed-use development on Normandy Place.

Rite Aid was founded as a single shop in Scranton in 1962. Since then, the chain has opened more than 2,200 locations across the nation, including 519 in Pennsylvania, which has more than any other state.