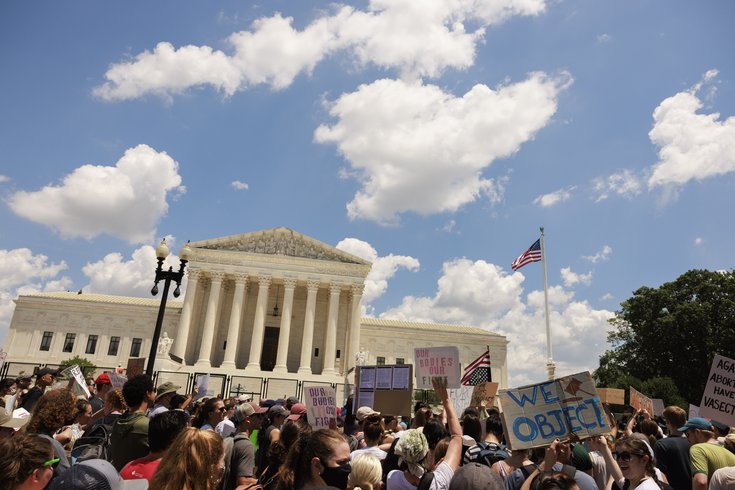 In the wake of the Supreme Court's decision to overturn Roe v. Wade, New Jersey has established itself as a sanctuary for abortion rights. The state has created a 'strike force' to enforce laws protecting access for residents and out-of-state travelers.

New Jersey is creating a "strike force" to protect abortion access for residents and people traveling into the state from parts of the country with heavy restrictions or bans, Attorney General Matthew Platkin said Monday.

The Reproductive Rights Strike Force allows authorities to take legal action against anyone who threatens or intimidates a person seeking an abortion in New Jersey. The state recently established itself as a sanctuary for abortion access, a response to the Supreme Court ruling in Dobbs v. Jackson, which removed federal protection for abortion rights in the United States.

The strike force includes representatives from several state agencies including the Division of Law, the Division of Criminal Justice, Division of Consumer Affairs, Division on Civil Rights, the New Jersey State Police, and the Office of the Insurance Fraud Prosecutor.

They will enforce state laws protecting abortion rights in New Jersey, most of which were passed earlier this year ahead of the Supreme Court's decision to overturn two landmark decisions – Roe v. Wade and Planned Parenthood vs. Casey – and return abortion rights back to individual states.

"The Strike Force we are creating today will ensure that these laws are enforced to the fullest extent possible, and that we use every available resource to protect access to abortion care in New Jersey," said Platkin, who called the Supreme Court decision a "devastating setback" for women's rights.

In January, Gov. Phil Murphy enshrined abortion rights into its state law in anticipation of the Supreme Court's decision. Several other states, including California and Connecticut, pushed similar measures just months ahead of the Supreme Court decision, attempting to establish more secure abortion access, rather than relying on case law.

With our Freedom of Reproductive Choice Act, the right to an abortion will remain the law of the land in New Jersey.

The additional protections are particularly welcomed by abortion providers and other reproductive health care workers in New Jersey, who have seen an influx of anti-abortion picketers and protesters in the wake of the Supreme Court decision. Roxane Sutocky, community engagement director of The Women's Center in Cherry Hill, told WHYY that the clinic has increased its security in recent weeks.

"We think that it (the strike force) is an important countermeasure to the new abortion landscape that we are experiencing in this country after the fall of Roe," Sutocky said. "I think as long as it's a collaborative response, it can be really effective in creating a safe community of abortion care provision for our state."

State officials have made it clear that abortion remains legal in New Jersey.

"A woman's right to choose what happens to her own body is a fundamental measure of freedom in a society and it must be protected if we are to uphold the founding principles that all Americans are entitled to life, liberty, and the pursuit of happiness," Lt Gov. Sheila Oliver said.

The Dobbs v. Jackson decision has changed abortion access in the United States in the weeks since it was finalized by the Supreme Court. Though most abortion bans and major restrictions have exceptions for medical emergencies, at least seven states have passed total abortion bans with no gestational time limit.

In other states, court orders have temporarily blocked bans and restrictions from being implemented, as abortion providers have closed or stopped accepting patients. In Pennsylvania, abortion remains legal, but is a major issue on the ballot ahead of November's gubernatorial election.

On Friday, President Joe Biden signed an executive order seeking to protect access to medication abortion and expand education about abortion rights in each state.

On Monday, the Biden administration followed up by telling doctors and hospitals that they cannot deny access to abortion in a medical emergency or if the mother's life is at risk, noting that federal law preempts state law in jurisdictions with abortion bans.

It is unclear whether the administration will take further action on abortion rights, though the president has repeatedly urged citizens to vote for Democratic candidates and those who support abortion rights during November's midterm elections.