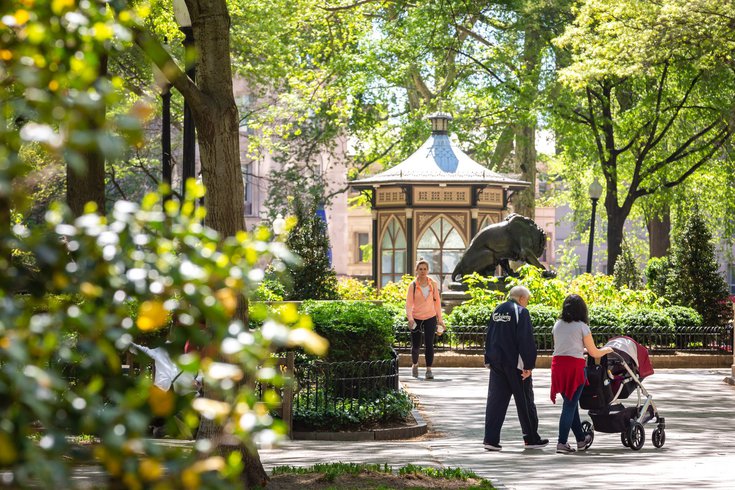 A suspect who allegedly raped a woman in Rittenhouse Square in the early hours of Friday morning has been taken into custody, police say. He's described as a 6'6" man in his 40s who was spotted panhandling near the scene of the crime.

A man who allegedly raped a woman in Rittenhouse Square during the early hours of Friday morning has been arrested, police say.

The suspect, who police sources said is 6’6” and in his 40s, was spotted panhandling near the scene of the crime at the corner of 18th and Walnut streets, FOX29 reported.

Shortly before 2 a.m., authorities say he grabbed a 27-year-old woman who was on her way home from a bar and raped her in between two tents that were set up for the Rittenhouse Square Fine Arts Show, CBS3 reported. The three day event began on Friday.

A 29-year-old security guard who was there to monitor the event site witnessed the attack and said something to the suspect, who fled north on 18th Street. She stayed with the 27-year-old until authorities arrived about 15 minutes later.

"It's really scary," Rachael Goodman, who lives near the park, told CBS3. "This is a really safe, very wealthy neighborhood, so you just don't think that something like this would happen right outside your door."

She added that she feels unsafe walking her dog at night and that there’s rarely a police presence in the park. She’d like to see more officers there.

The department’s Special Victims Unit is investigating. Anyone with information about the sexual case is asked to contact them at 215-685-3251.

Police say it’s a good idea to avoid traveling alone at night and that people should be aware of their surroundings and willing to help each other out.