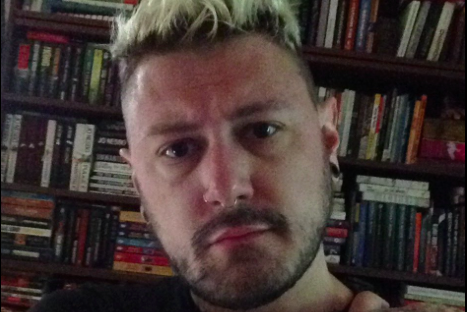 An adjunct professor at Rutgers University is under scrutiny after he received a visit Tuesday night from the New York City Police Department in regards to a barrage of tweets critical of President-elect Donald Trump and  one hypothetically posing a question about a shooting spree.

Kevin Allred, a lecturer specializing in pop culture and politics, had been posting dozens of tweets about the perceived hypocrisy of Trump supporters in the run-up to Tuesday's knock on the door. One of those tweets, since deleted, offered a controversial viewpoint on the Second Amendment. Another depicted a man burning the American flag.

i said: would conservatives care as much abt the 2nd amendment if guns killed more white people? a question meant to expose double standard

& to be clear: my statements the police labeled threats were abt burning the american flag& me posing a rhetorical question on 2nd amendment

A screenshot of Allred's deleted tweet offers a better understanding of why his social media activity was considered potentially threatening. 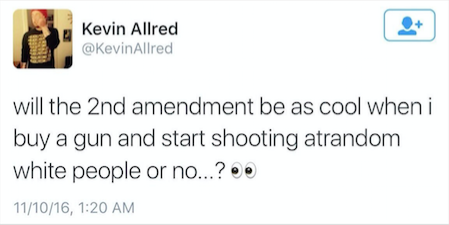 and i didn't want to delete it bc i stand by the fact it's protected speech. but had to in order to get back on here. 😡

At around 10 p.m. Tuesday night, Allred tweeted that he'd been brought in by the NYPD and taken to a local hospital to undergo a psychiatric evaluation.

NYPD just came to my house bc Rutgers Police told them i'm a threat based on political statements i've made on campus and on twitter.

they've forced me to now undergo a psychiatric evaluation at the hospital. they brought me by ambulance tho i'm not under arrest technically

Allred could not immediately be reached for comment. Best known for his popular "Politicizing Beyoncé" course, he has written for The Huffington Post, Salon and The Washington Post.

At his personal website, Allred describes himself as an incendiary thinker with "no shame" and five core values:

In an interview with the New York Daily News, Allred said doctors at Bellevue Hospital were confused by police insisting on a "ridiculous" evaluation. Police told him that while he was not under arrest, he would be taken by force to the hospital if he refused to comply.

"The Rutgers University Police Department responded to a complaint from a student and took all appropriate action," a spokesperson said. "We have no further comment."

Allred has questioned the university's account of the procedure it followed before contacting NYPD.

& this isn't over by a long shot. bc Rutgers PD is still after me. they said they'd been trying to contact me all day and then went to NYPD

but guess what? no missed calls. no emails. & they've had my home address. & also know i'd be there tomorrow to teach. pure intimidation.

Thankful for the support he's received, Allred sent out several more tweets Wednesday, urging civic activism and putting the negative impact of his experience in perspective.

& i should also say, at this point i'm completely fine. this is not nearly even comparable to what others go through daily. but still scary