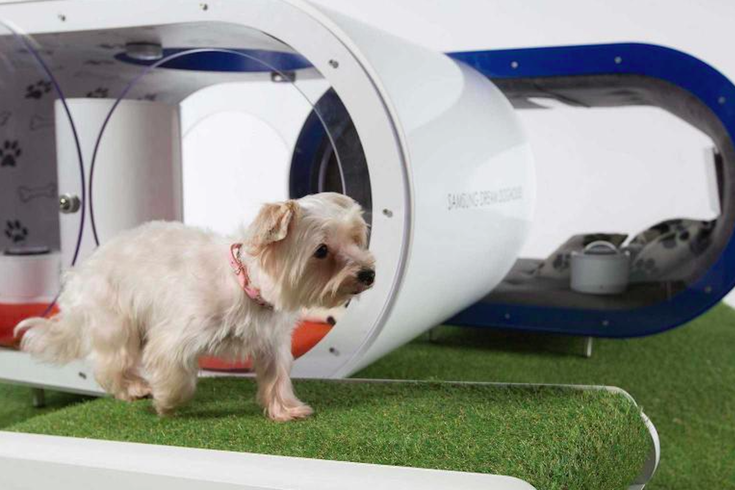 One lucky pup is the proud owner of Samsung’s Dream Doghouse, a $30,000 canine palace that features an AstroTurf-covered treadmill and paw-controlled snack dispenser, Fortune.com reports.

The doghouse also features a hydrotherapy pool and an entertainment wall with a Samsung Galaxy Tab S tablet. The project was the result of a collaboration of a team of 12 designers and builders over a six-week period.

Samsung gave away the tiny home - the only one it built - via a social media contest that ran until March 2.

Congrats to our ultimate #HomeDog…enjoy your Dream Doghouse #winner & huge thanks to all our entries pic.twitter.com/fGLPe04hPm

“The Samsung Dream Doghouse looks sleek and modern, featuring the kind of tech the discerning dog of the future will need,” Andy Griffiths, president of Samsung Electronics U.K. and Ireland, said in a press release. “From dogs who have social media profiles, to owners who use video calling to check on their pet while away, technology is fast becoming an integral part of everyday life.”

The company surveyed 1500 dog owners and found that a quarter of them wanted their pets to have their own treadmill, as well as a tablet or TV. Of the dog owners surveyed, 64% believed their pets would benefit from more technology and gadgets, and 18% said they’d like their furry companion to have its own hot tub.

The house is currently on display at the Crufts Dog Show at Birmingham, England’s National Exhibition Centre, until Sunday.

See the impressive pooch pad below and read the full article here.