Say a prayer for the beautiful people, for their struggle is real 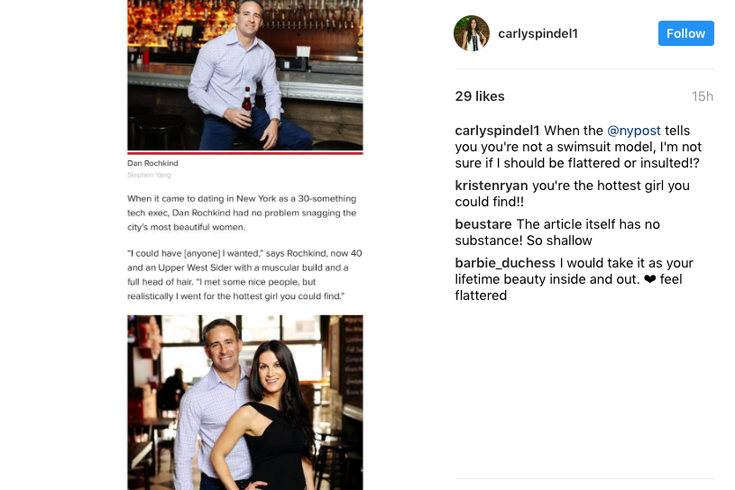 Carly Spindel was left contemplating the meaning of true beauty after reading quotes from her fiancee in the New York Post.

You want to know why I don’t date hot women anymore? It’s really simple: I married one. (Also, I’m too stubborn to refer to going out with my bride as a “date night.” You might as well wear matching outfits – fanny packs included – to the Cherry Hill Mall if you call it that.)

You want to know why Dan Rochkind, a 40-year-old “Upper West Sider with a muscular build and full head of hair,” doesn’t?

As his not-“a bikini model” fiancée Carly already has, all you have to do is check out the New York Post in print or online!

Here’s a taste of what you’ll see if you read it:

When it came to dating in New York as a 30-something executive in private equity, Dan Rochkind had no problem snagging the city’s most beautiful women.

“I could have [anyone] I wanted,” says Rochkind, now 40 and an Upper West Sider with a muscular build and a full head of hair. “I met some nice people, but realistically I went for the hottest girl you could find.” …

He spent the better part of his 30s going on up to three dates a week, courting 20-something blond models, but eventually realized that dating the prettiest young things had its drawbacks — he found them flighty, selfish and vapid. …

Looking to avoid such a fate, Rochkind started dating a woman who isn’t a bikini model, Carly Spindel, in January 2015. The two are now happily engaged.

Far be it from me to judge the relationships of others, for I know not what they know about not only one another, but what their hearts are telling them to do.

Still, your heart can’t help but go out to Carly, a cuddle-worthy, very elegant, “softer beauty,” especially after you see her Instagram contemplations about said article.

Granted, the article is ostensibly a contemplation of scientific research which found that “beautiful people are more likely to be involved in unstable relationships.”

Carly probably already knew that, what with being a "persistent, vivacious and gregarious" second-generation matchmaker who "enjoys spreading love across the country."

Taken as a singular piece of journalismism, though, it’s a hilarious chronicle of “woe is me because I’m good looking” naval gazing that extends beyond Rochkind.

Yep, other attractive people think the odds are stacked against them. I will now share a few of their contemplations, from the Post story:

“When men see beautiful women, they are more concentrated on how she looks because they want to ‘have’ her, and so they don’t want to go deeper and get to know her. And that’s why at the end of a date they wonder, ‘Oh that girl is so beautiful but so empty.’ That’s happened to me often.” – Isabell Giardini, a 22-year-old Italian beauty signed with Major Models

“As a person who’s always been complimented on [my] ‘stunning beauty’ … I’d been searching for a ‘hot’ guy to match the label I had always been given. But after a date or two, they’ll have problems hanging out with you and then will ghost.” – Megan Young, a 23-year-old p.r. woman and "svelte, blue-eyed brunette who used to exclusively date 6-foot-tall dudes who looked like Calvin Klein models"

“[Beautiful men] are very into their bodies and don’t really care about people that much, or make time for their family.” – Sonali Chitre, an environmental lawyer and the founder of Priyamvada Sustainability Consulting, who considers herself “a 9 or a 10” but spurns gorgeous guys for “superballer” men with high-paying careers

If you don’t get the idea, yet, click on over to the story. It comes complete with glamour shouts of all the aggrieved victims.

Sure, we live in a world where we often have to ask ourselves, “Why the hell did they say that publicly?” but having to ask yourself that question five or six times over the course of a single tabloid story is a remarkable feat.

Oh yeah, good luck, Carly. Hope your groom-to-be (still?) showers you with all the love you deserve even if you aren't a bikini model.

Update: Carly has since edited the text of her Instagram post about the story, calling out the paper for "twisting" Dan's words. 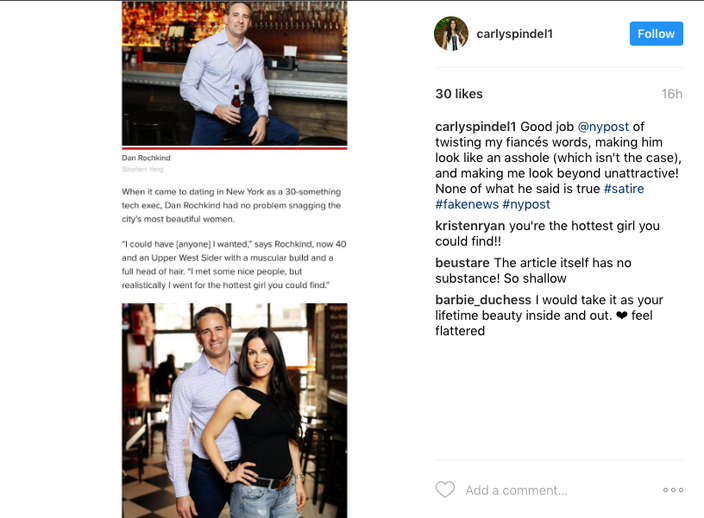