SRC approves 3 new charter schools in Philadelphia, votes down 9 others

Charters are draining the district's traditional schools of vital resources, one opponent had told the board

The School Reform Commission voted Tuesday night on 12 applications for new charter schools in Philadelphia, approving three of them.

Each of the three schools was approved with conditions. They are all slated to open for the 2017-18 school year.

Cheers broke out from Esperanza and KIPP North Philadelphia supporters as the SRC announced its decisions on their applications. Several supporters of each school had urged the SRC to approve the applications during the public comment portion of the meeting.

Esperanza Academy, a charter school in Hunting Park, educates students in grades 6 through 12. It sought an elementary school with 800 seats, but the conditions granted by the SRC limit the new school to 432 seats, CEO Luis Cortes said.

Nevertheless, Cortez and his supporters were excited to expand the school, posing for photos at the front of the auditorium. The school first will draw students from its waitlist before accepting applications from across the city.

"We've been denied our elementary school application for a couple years," Cortes said. "We're just very grateful that they were able to see that we deserve the opportunity to do this. They gave us 432 seats. We need to look at and examine what that means, working our program backward."

KIPP, which currently operates four charter schools in Philadelphia, applied for a pair of schools, but received approval to open a North Philadelphia branch, envisioned to enroll 1,380 students in Kindergarten through 12th grade. The school will draw students from Strawberry Mansion and other portions of North Philly.

KIPP's other application, for a K-8 school in Parkside, was denied. But KIPP CEO Mark Mannella said he was focusing on the positives Tuesday.

The third charter application approved, Russell Byers Academy Charter School, will serve students in grades 6 through 8, drawing students from its Center City elementary school. Another 25 percent of seats will be reserved for students in Strawberry Mansion, Kensington and Olney.

Commissioner William Green, the former chairman, said the SRC "acted in good faith" under Pennsylvania law, which he said forbids the SRC from rejecting an applicant based on the district's own financial situation.

"The operators that most wanted to expand are the people who don't cooperate in the (School Progress Reports) and provide us some data," Green said. "What I'm concerned about is unfettered expansion of our worst operators and us without the ability to close them for three, four or five years.

"It takes resources from the district, but it also puts families and children who think that they are getting a better option – who are not – in a much worse situation than they are in their district school." 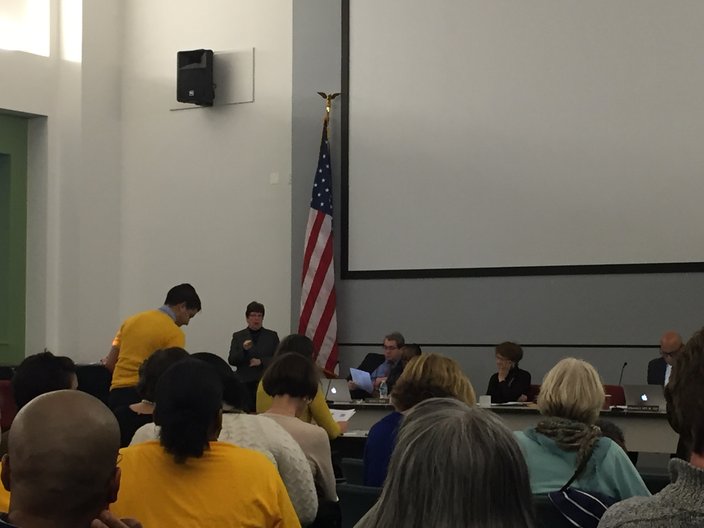 Members of the School Reform Commission hear from charter school representatives and members of the public during Tuesday's special meeting at the Philadelphia School District administration building on North Broad Street. The board is considering 12 applications for new charter schools in the district.

Prior to the votes, the SRC listened to more than 30 speakers articulate their support or opposition for specific charter applications, or charter schools in general. Both KIPP and Esperanza each had several supporters provide vouch for the applicants.

Toya Algarin, the mother of a KIPP student, praised the education her son, Romeo, received. She told the commission that he was accepted recently into Morehouse College in Atlanta, the school of his choice, after a trying year that included Romeo being struck by a vehicle.

"I implore you to approve these applications so other Philadelphia children can reach their goals like Romeo has," she said.

Rafael Rodriguez, a senior at Esperanza Academy, urged the board to grant Esperanza an elementary school, noting that more than 69 percent of Esperanza graduates have advanced to college since 2010.

"Success at Esperanza Academy has not happened by chance," said Rodriguez, the president of the school's National Honor Society. "It is the result of personal assessment of students' needs and responding to those needs quickly."

Opponents of charter schools also had their say.

Tomika Anglin wondered why the SRC would approve any additional charter when Superintendent William Hite said the district has reached a saturation point.

"It is unreasonable to continue to authorize charters in a district that can't even fix the doors on a toilet stall," Anglin said. "If the district has reached the saturation point with charters, then stop authorizing them."

Lisa Haver, of the Alliance for Philadelphia Public Schools, asked the SRC to reject all dozen applications. She said charters are draining the district's traditional schools of vital resources, forcing students to live under austerity budgets.

"The only responsible action by the SRC here today is to reject all charter applications and do everything it can to put resources into existing public schools," she said.

The SRC approved five of 39 charter applicants last year at a special meeting heavily anticipated by politicians, educators and parents. Some anti-charter proponents grew particularly boisterous that night, even interrupting the meeting after the SRC granted its first approval.

The meeting Tuesday was noticeably calmer and proceeded without any major interruptions.