The multimillion dollar project, which will refurbish the historic vehicles that ran along Girard Avenue, is on track for completion in September 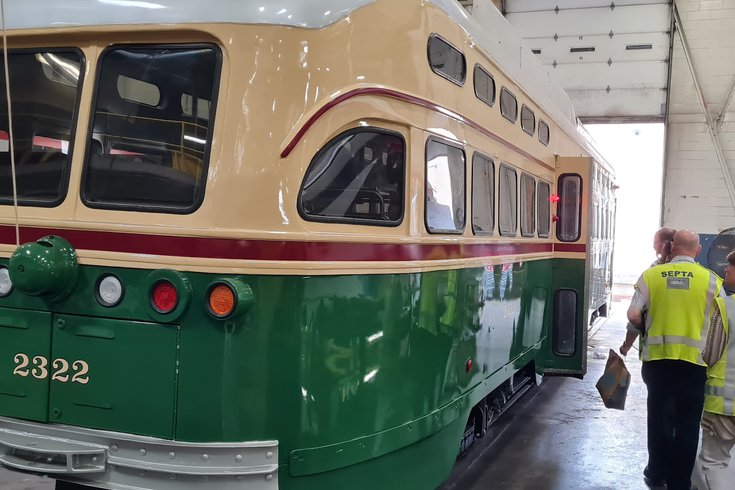 SEPTA is working to restore its historic 1947 trolleys that run on Route 15 along Girard Avenue. Above, a newly-refurbished trolley car that has undergone repairs at the Woodland Avenue facility.

SEPTA is working to refurbish its historic fleet of green-and-cream colored trolley cars that date back to the first year of the Cold War and Jackie Robinson's first MLB contract.

The multimillion dollar project aims to restore the 1947 PCC II trolleys that ran on SEPTA Route 15 along Girard Avenue through North and West Philadelphia. SEPTA expects to have the project largely completed by September.

"It's almost like we're separating the body from the frame and we're replacing all of the frame again," SEPTA director of rail maintenance Brian Aaron said. "These are from 1947 and they've been on the streets of Philadelphia since then. You have a lot of rock, salt, moisture and just wear and tear on the vehicles."

Aaron oversees about 80 employees at a Woodland Avenue facility in Southwest Philadelphia, with about half of them devoted to the trolley repair project. The team is restoring them to "better-than-new" condition, with all-new frames, sheet metal on the sides, flooring, windows, air conditioning systems and wheels. The trolleys are also receiving new paint, although the familiar green and cream coloring will remain.

A SEPTA employee works on refurbishing a 1947 trolley car.

"We're basically trying to extend the life of these as long as we possibly can," Aaron said.

Trolleys have roamed the streets of Philadelphia in some form for over 150 years, and the city acquired its first PCC II cars in 1947, The Inquirer reported.

There were once hundreds of these cars in Philadelphia, before they were taken out of service in the early '90s due to budget and service cuts. Following more than a decade of public demands and political pressure to bring back the trolleys, 18 PCC II cars were fixed up by a company in Pittsburgh and reinstated.

"They're definitely very unique," Sabrina Eisl, a senior project engineer at SEPTA who leads the restoration’s design team, said. "I think that's one thing that people really like, and one of the reasons why we're keeping them around."

The 18 handicap-accessible trolley cars that had been running from 63rd Street at Girard Avenue to Richmond Street at Westmoreland Street were taken off the roads and replaced by buses in January 2020 due to repair work, as well as a bridge removal. The trolley cars were expected to return in about a year, but the project ended up taking longer, largely due to delays caused by the COVID-19 pandemic.

While some of the trolley cars have already been restored, between 10 and 12 cars should be back on the roads by September. Some of the buses will continue to run on Route 15 as well.

A 1947 SEPTA trolley that has finished undergoing refurbishments at the Woodland Ave facility.

The estimated cost to refurbish each PCC trolley is approximately $250,000, according to SEPTA, which has been trying to grow its overall transit ridership rates since their pandemic slump. SEPTA hit just over half of its pre-pandemic ridership levels last year.

Through the retro trolleys' many years in service, they have become so beloved that, along with fan pages and nonprofits dedicated to their preservation, SEPTA's gift shop even sells plushies of the historic green-and-cream cars.

"I know there's a large trolley fan club all over the country that really follows this program; they follow the Philly trolleys, even the newer ones," Aaron said. "So I think it's a good project for the city, and I think that people will really appreciate it.... especially people along Route 15 that are used to seeing them out there."

While the historic PCC trolleys should be back on the roads by fall, they will eventually be replaced by new trolley cars as part of SEPTA's larger Trolley Modernization project.

"Our job in the maintenance department is to make sure the existing fleet is kept in top shape until the new vehicles start coming in," Aaron said. "They'll start to weave in the newer vehicles with the older vehicles until we have all new vehicles."

The Trolley Modernization project is planning $1.8 billion worth of improvements to the nation's largest trolley network, including the purchase of higher-capacity trolley cars, station renovations and new platforms, as well as handicap-accessible upgrades to the entire system. Over the summer, SEPTA asked riders for input on the plan.

It could take as long as a decade for full implementation of the project, so restoring the 1947 trolleys gives SEPTA the ability to run ADA-accessible trolleys on Route 15 in the meantime. Plus, it gives fans time to enjoy rides on the historic trolley fleet before the cars disappear for good.