SEPTA will not appeal ruling regarding anti-Muslim ads

The transportation authority will no longer accept 'public issue' advertisements 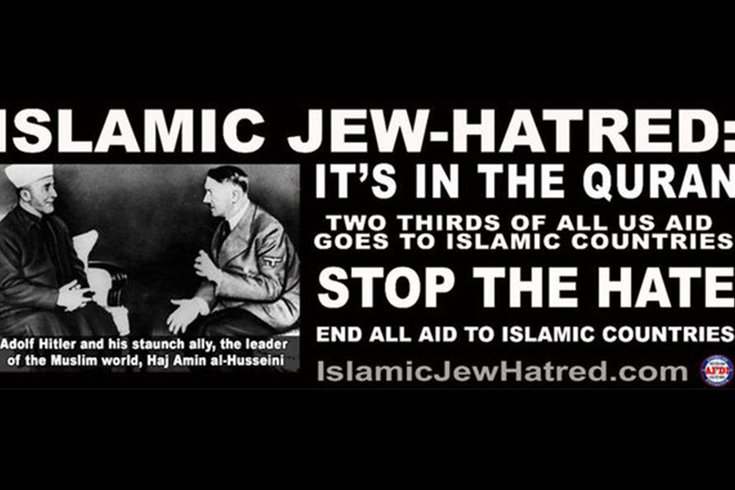 A Philadelphia judge this week ruled SEPTA has to put this ad on its buses.

Read More
SEPTA will not appeal a federal court ruling requiring the regional transit authority to run advertisements displaying anti-Muslim messages.
The transit agency announced its decision Thursday, saying it must be mindful of the expenses of filing a costly appeal. The American Freedom Defense Initiative (AFDI), which purchased the advertisements, has won similar court battles in other major cities.
SEPTA condemned the advertisements, which depict Nazi leader Adolf Hitler meeting with Haj Amin al-Husseini, a Palestinian Arab nationalist, under the message "Islamic Jew-Hatred: It's In The Quran."
But under its current advertisement policy, Special Counsel Gino Benedetti said SEPTA is forced to run them. He said SEPTA has revised that policy to prohibit any "public issue" advertisements, which made up less than 1 percent of all ads SEPTA sold in the last five years.
"The policy that we adopted in October really tightens up our position in this case," Benedetti said. "We thought our position was tight enough, but we now think it is even stronger. Therefore, we are pouring our resources into that. If the ads come again, we think we are in a far better position than we are today."
The advertisements will run on the side panel of 84 SEPTA buses for a four-week period beginning in early April. The buses will be placed in regular rotation throughout the region.
The advertisements cost AFDI $30,000. Benedetti said SEPTA has not discussed donating that money.
If AFDI submits new advertisements, Benedetti said, the group would be doing so under SEPTA’s new policy, allowing SEPTA to reject the ads. However, Benedetti said he expects AFDI to test that policy.
A trio of representatives from the Interfaith Center of Greater Philadelphia also appeared at the announcement, which came during SEPTA’s monthly board meeting.
Chairwoman Judith Sullivan said the group supports SEPTA’s decision, but condemned the advertisements, saying they “sent shivers across our region.”
“While we treasure and fight for the right of free speech, we decry those who want to use this sacred privilege to insight hatred and prejudice,” Sullivan said. “We can do better. We in Philadelphia want to construct bridges of understanding.”
Imam Muhammad Abdur-Razzaq Miller said some Muslims may refuse to ride on buses displaying the ads, but was unaware of any universal boycott from the Muslim community.
“It’s devastating, not only to Muslims but to other people, too,” said Miller, the head Imam of the Mosque of Shaikh M.R. Bawa Muhaiyaddeen. “For the Jewish community, it’s not very nice to see Adolf Hitler on the buses or to see propaganda that’s reminiscent of what Hitler and Joseph Goebbels used to denigrate and dehumanize a religion and to exterminate them. This type of thing is also extremely distasteful to any Jewish person.”
SEPTA's announcement came two weeks after U.S. District Judge Mitchell Goldberg ruled that the agency's ad restriction violated First Amendment rights.
AFDI founder Pamela Geller hailed that ruling as a protection of free speech.
“Jew-haters have been running anti-Semitic and anti-Israel ads on buses for years,” Geller said. “We are responding.”
AFDI, which is listed as an anti-Muslim hate group by the Southern Poverty Law Center, has spent $750,000 to run similar ads in New York, Boston, Chicago, Miami, Washington and San Francisco, according to Geller.
The San Francisco transit authority ran its own advertisements against those from AFDI. Benedetti said SEPTA will not do that, noting AFDI's advertisements include a disclaimer.
Information from Reuters was used in this report.