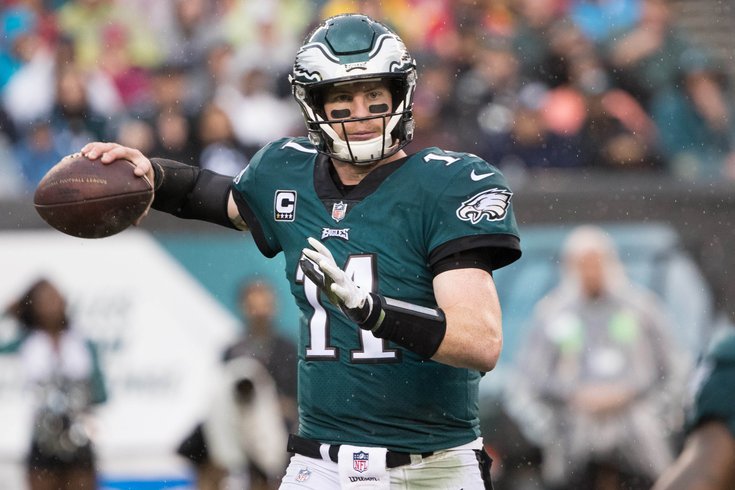 Every time you ask a player about an individual award or honor, they say something about how humbling it is or how the real credit goes to their teammates, and then quickly remind you that the most important thing is winning games.

And now that the Eagles have won the biggest game and brought Philly its first Super Bowl title, you can expect plenty of praise to be heaped onto Doug Pederson's players throughout the offseason. In fact, it's already started.

Pro Football Focus recently released its annual rankings of the Top 101 players in the NFL and seven Eagles made the cut, including three members of the offensive line – Jason Kelce (25th), Brandon Brooks (53rd) and Lane Johnson (85th) – and it probably would've been four had Jason Peters not missed half the season.

Kelce, who stole the show at Thursday's championship parade, was the Birds' highest-ranked offensive player – and the one who saw his stock take the biggest jump after being unranked last year. Kelce was the top center in the rankings and third-highest offensive lineman.

Here's what PFF had to say about the Eagles All-Pro center:

Philadelphia’s offensive line finished the season as the No. 1 ranked unit in the league, even after losing LT Jason Peters to injury after just seven games. A big reason for that was the bounce-back season from Jason Kelce at center. Kelce came back from a disappointing 2016 season and posted the best run-blocking grade we have ever given a center over 12 years of grading. His ability to take care of his assignment, whether that was a lineman or a linebacker at the second level, was second to none, though his pass-blocking was average over the year, as he surrendered 22 total pressures from 19 games.

The only other member of the Eagles offense to make the list was second-year quarterback Carson Wentz, who came in at No. 81 after being unranked in his rookie season. While that may seem low for a QB who was considered the MVP frontrunner before a season-ending injury in Week 14, it's worth noting that only four other QBs were ranked ahead of Wentz: Tom Brady (2nd), Drew Brees (56th), Matt Ryan (58th), and Ben Roethlisberger (68th).

A torn ACL robbed us of the conclusion of a truly spectacular breakout sophomore campaign from Carson Wentz, but the Philadelphia Eagles at least were able to overcome that and continue their run as the No. 1 seed in the NFC all the way to a Super Bowl championship. Wentz was mind-blowing on third down this season, with the minor caveat that he was far from special on first and second down, earning an overall PFF grade of 87.6, a jump of almost 10 points from his rookie year.

Despite the Birds' high-flying offense, none of their skill-position players made the cut, which seems a bit odd. (Put a mental bookmark in that one, because we'll get back to it in a little bit.)

The highest-ranked Eagle was Fletcher Cox at No. 19 overall, placing him second among defensive tackles. Cox, who anchored the Birds' top-ranked run defense, finished 2017 with 5.5 sacks and a forced fumble. PFF had him ranked 55th a season ago.

Fletcher Cox was good enough in the postseason to leap above Geno Atkins in the rankings overall this season. Cox was the most dominant player on the Eagles defense in their biggest games of the season, giving them a mismatch in the middle of the line that neither the Falcons nor Vikings could cope with. In the Super Bowl, the Patriots fared better thanks to their offense as a whole, but Cox still generated six total pressures, giving him 16 total for his three-game postseason. Strong enough to make even powerful guards look overmatched, Cox can destroy run and pass plays.

While Robinson surprised a lot of analysts and fans alike with his play this season, which is the reason he climbed so high after being unranked last season, Graham actually fell 18 spots down the list – he was ninth overall last year.

For the first time in his NFL career, Brandon Graham got enough sacks over the season to get some of the credit he has deserved for years and ironically enough, he was even better the previous year when his play went largely unnoticed because he didn’t have those sacks. Graham had 60 total pressures over the regular season and was impressive during the playoffs before making maybe the single biggest play in Super Bowl LII, stripping Tom Brady of the football late in the game and helping to seal the win for the Eagles.

Last year, the Eagles had five players crack PFF's Top 101 list, but considering two of those players (Peters and Jordan Hicks) both missed half the season and were basically disqualified from making this list.

Also, no love for Zach Ertz? Three tight ends made the list – Rob Gronkowski (9th), Travis Kelce (50th) and Hunter Henry (67th) – but Ertz, who finished tied for second among tight ends with eight touchdowns and third in both receptions and yards, was nowhere to be found.

Gronkowski and Kelce are one thing, given they both finished ahead of Ertz in several categories like yards and YPC, and had more than twice as many 20-plus-yard receptions – they were tied in touchdowns and had a comparable number of receptions.

It's so bad that it actually makes you wonder if these rankings mean anything at all...