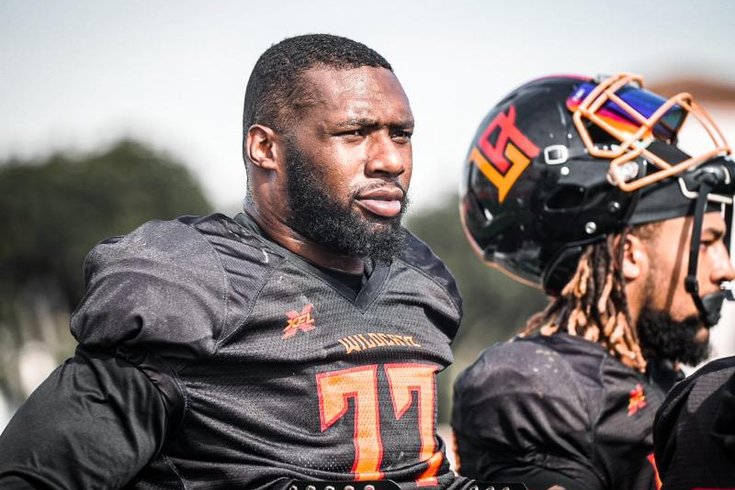 LAS VEGAS – The lone sound of Shawn Oakman’s cleats clip-clapping down the entrance tunnel of Houston’s TDECU Stadium was greeted by an early-February sun that caused him to squint when he looked up. Before then, there weren’t many high-blue skies he could peer into. Oakman almost had the place to himself. There were some maintenance people milling around, a few from the grounds crew, and some network personnel pulling cables together on the sideline.

But mostly, it was just Oakman, the 6-foot-9, 280-pound defensive end from Baylor and Penn Wood High School, sitting on a bench by himself in sweats, hours before making his pro football debut in the XFL for the Los Angeles Wildcats.

Some players before games still give themselves a jolt by banging their helmets into a locker room concrete wall. Others tend to tune out the world under their headphones. Still others will immerse themselves into their iPads, reassuring their understanding of the game plan.

“I cried,” he admitted. “I sat there and remembered all of the things I’ve been through, everything that I’ve been waiting for and it was happening. It happened once I first stepped on the field. I sat on the bench and I started to pray. It was overwhelming. Now, I cry before every game. I’m trying to look at every moment and take it all in.

“It’s taken some time, but I’ve learned to live in the moment, not looking back at my past, or looking at my future.”

One of the last times Oakman, 27, got emotional came in April 2016. He was weeping in a jail cell, charged with second-degree sexual assault, wondering if his life was over. Many “so-called friends” and Baylor turned their backs on him. Though he graduated Baylor in December 2015 with a degree in kinesiology, he struggled to find work. As he awaited trial, Oakman was forced to take on various menial-labor jobs, from working in a warehouse packing diapers at $11 per hour, to landscaping for a fabric fertilizer company, to sorting trash.

He would watch TV with co-workers and he couldn’t escape his name being associated with words like “rape” and “sexual assault.”

Exactly one year ago to this day, February 28, 2019, Oakman was found not guilty of all charges by a jury after just 45 minutes of deliberations.

The last time Oakman did get that emotional was when the verdict was announced. He ran out of the courtroom, unsure of where he was going, and ended up in the judge’s chambers, where he dropped to his knees and cried. Court bailiffs allowed him to have his moment there.

These next three months he hopes will be providing more countless moments.

In three games, Oakman has one sack and is gradually regaining his Baylor form, when he was projected to be high-round choice in the 2016 NFL Draft.

“The football field and in the locker room are the few places I feel comfortable,” Oakman said. “There is still some anxiety I’m dealing with in public, because of the accusations. It really didn’t hit me until I went to the Baylor-Oklahoma game last year, at Baylor. I reached out to the school, and they said it was fine. They gave me restrictions, but they allowed me to sit in the stands.

“I thought I was going to be okay. But I wasn’t. By the time I stepped down to the sidewalk by the stadium, I found out for the first time that anxiety was real. My hands started to sweat. My heart was pounding through my chest. I literally wanted to sit down on the sidewalk and curl up into a ball. It was so out of my comfort zone. I couldn’t stand it. I had to get out of there. I felt like I was being accused by people in their minds, even though I was found innocent and I had permission by Baylor to go to the game.”

Oakman left the game at halftime.

MORE: Tainted by justice system, Shawn Oakman yearns for a place in the NFL

That anxiety spilled over into his third week of the Wildcats’ training camp.

Oakman was going full speed when he wasn’t supposed to be. Wildcats’ head coach Winston Moss threw him off the field and off the team. Oakman was waived on Dec. 16, 2019. On January 27, 2020, the Wildcats resigned him.

“I didn’t have the experience to calm down and chill out in a professional setting,” Oakman said. “I felt like I had something to prove with those guys. Coach Winston let me have it — and I found out that I have a lot more to learn. What I appreciate about coach Winston is that he wanted me to get right. He cared more about me as a person than a football player.

“Being cut is probably the best thing to happen to me. I came into this league with a chip on my shoulder, and it was a large chip. I came in looking for blood. I have to take everything as a privilege, and it is. My body is good. I just have to slow down and keep working to make myself better. I’m committed to this.”

Vince Amey, the Wildcats’ defensive line coach, fought hard to get Oakman back to the Wildcats. Amey, a former defensive line coach at the University of Arizona, saw something in Oakman. He likes Oakman’s tenacity and he feels he can shape him into a formidable force. Amey is very good at getting his players to break bad habits and teaching them proper technique.

“I was always fine with Shawn’s aggression, he just needed to watch the perception off the field, which isn’t really fair, if you ask anyone who really knows Shawn,” Amey said. “The guy is 6-8 and rocked up. People are intimidated by him. He’s a presence when he walks into a room. Just talking to him, coaching him up, he’s a good dude and football is a good outlet for him.

“Shawn is still learning the game. He has to overcome the perception of who people might think he is off the field. Once he overcomes that, the sky is the limit for Shawn, because I think he has that kind of ability. I believe Shawn can play in the NFL. He certainly has the size, and he can rush the passer. Once Shawn’s motor gets going, no one can block him. He’ll be just fine when he learns how to use all of the levers he has. He’s doing okay now, but he can and will do better.

“I do expect more out of him. Knowing Shawn, I know he expects more of himself. I have a lot of faith in Shawn. I’m a true believer in guys getting second chances.”

Oakman says he’s getting therapy to deal with his anxiety. And he’s found a home again.

“It’s starting to come around,” Oakman said. “I’m starting to see who I am, and who I want to be. I know what I want out of life. This experience with the XFL is a great step in the right direction. It’s a good league and it shows you what the NFL is like. To me, I’m just happy to be out here playing ball.

“The game has definitely slowed down for me. I’m seeing things better. Being on a football field is one of the places I truly feel comfortable.”