DeMarcus Cousins finished with 33 points and 17 boards, but you could argue Nerlens Noel played him to a draw

The Sixers were pretty darn competitive right down to the final buzzer, but they lost to the Sacramento Kings 107-106 on Tuesday night at Sleep Train Arena. Here’s what I saw:

Who said tanking teams don’t play exciting basketball in late March? No, it wasn’t exactly Heat-Spurs, but the Sixers and Kings played an honest-to-god exciting professional basketball game while most of Philadelphia was asleep. There was a lot of interesting stuff going on in Sactown: huge runs, controversial calls, Boogie Cousins pouting after being whistled for obvious fouls, etc. both sides. For both sides, the competitive juices were definitely flowing.

Let’s go blow-by-blow for super crunch time, with 1:20 remaining and the score tied at 105 and the Sixers holding possession:

•    Receiving a pass at the left elbow late in the shot clock, Nerlens Noel takes a dribble and tries to hit Luc Richard Mbah a Moute in the right corner. The pass sails into the third row. It’s the Sixers’ 20th turnover.

•    The Kings go to Cousins (who else?) in the post on the other end on the left block. Three Sixers literally converge on Boogie, who misses the shot long. Ish Smith doesn’t box out Ray McCallum, who gets the easy putback. 107-105 Kings.

•    The Sixers run Robert Covington off a couple of screens and he gets an isolation opportunity against Cousins at the top of the key on a switch. Bobby Covs goes hard to the rim and gets fouled, but can only convert 1-2. 107-106 Kings. Cousins makes this face after pushing Covington and yanking his jersey: 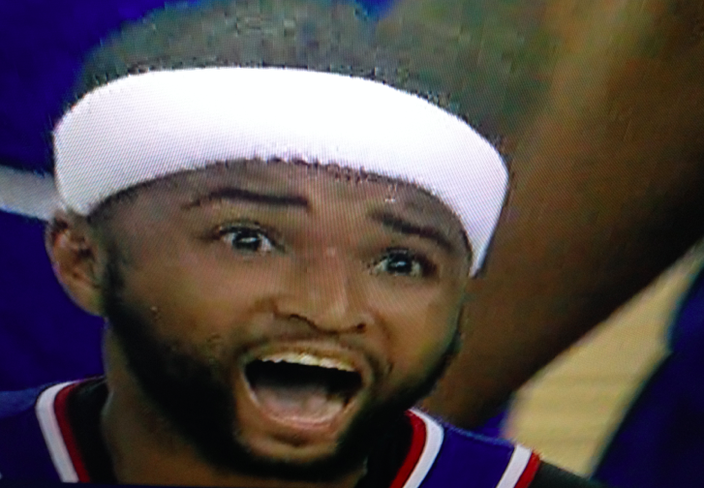 •    Cousins on the left block again. He barrels into the much skinnier Nerlens Noel, knocks him back, and promptly sees his jump hook blocked by his fellow Kentucky product. Cousins gets another look on the rebound right before the shot clock expires, but misses. Brett Brown literally sprints on the floor and gets a timeout with 8.2 seconds left.

•    Not exactly Brett’s finest final play leads to a perfect loss for a team with some serious draft aspirations:

1. BOOGIE VS. NERLENS, PART ONE: Nice, efficient night for Noel, who used his quickness advantage against a sometimes-indifferent Boogie to create shots for himself and passing lanes for his teammates. He finished with 14 points (5-10, 4-5 shooting) three offensive boards, and three assists (two turnovers). On one play against Reggie Evans, Noel recreated the plot of the movie “Thunderstruck”:

2. Covington was very efficient (21 points on nine shots), and at one point in the fourth quarter he scored nine points in 45 seconds when two treys sandwiched a monster alley-oop. For his good, he needs to keep starting games.

3. I wrote about this subject last month, but Thomas Robinson wants to find a permanent home. Along those lines, he takes it as a personal slight that the Kings traded him less than a year after drafting him fifth overall:

Thomas Robinson on time with Kings "Draft night was great. That was about it." Robinson had 14 points and 8 reb Sun vs Lakers #SixersTalk

Robinson always plays with a chip on his shoulder, and he scored 16 points and pulled down eight rebounds in a 21-minute run. I’m really starting to enjoy the blend of quickness and physicality in his face-up game. T-Rob needs to shoot 10,000 jumpers minimum this offseason. Once teams have to respect his shot, he could turn into something like a poor man’s Blake Griffin with better rebounding.

4. REASON #1 THEY LOST THE GAME SHOOTING 49 PERCENT: 20 turnovers, and the major culprit was one of my personal favorites, Ish Smith, who had seven giveaways by himself. A lot of these came in a 14-point fourth quarter in which the Sixers struggled to get into anything good on the offensive end.

5. Furkan Aldemir acquitted himself fine in 10 minutes of playing time, but the major story is that he attempted another 3-ball. One of these days, he’s going to hit one and Sixers Twitter will spontaneously combust.

6. For this team, which sports one of history’s worst offenses, a 70-point first half is pretty incredible. I thought they did a great job pushing the ball and looking for 3s in transition. Lil’ Sip certainly hit a few Canaanballs.

1. BOOGIE VS. NERLENS, PART DEUX: Much better job this time around by Noel. Cousins had a ridiculous overall line, but he took 27 shots and 19 free throws (which is impressive, but not for the efficiency) to get his 33 points. He really had trouble scoring on the initial shot against Nerlens, who had the majority of his six blocks against Boogie. He still bulled his way to 10 offensive rebounds and all of those free throws, which illustrate what a physical presence he is.

2. Fair is fair. I have posted Andre Miller on the wrong end of videos and post Nerlens Noel on the right end quite a bit, but The Professor got the rook baaaaad in the open floor:

3. REASON #2 THEY LOST THE GAME SHOOTING 49 PERCENT: 20 offensive boards for the Kings. This happened partially because the Boogie attracts such a crowd.

4. As well as Robinson played offense, Rudy Gay got into a sustained groove attacking him on the other end in the first half.

5. Covington played well, but he made a really unnecessary foul on Gay right before crunch time got underway.

Three absolute beauties. Sam Hinkie put together a bad team, but the Sixers have a ton of athleticism across of the board. OVERALL GRADE: A-

This missed shot won’t bolster Ish’s poor field goal percentage, but he deserves credit for taking Cousins out of the play and creating the opportunity for this putback slam. Grade: B

JaKarr Sampson, or Julius Erving? You be the judge. Grade: B+

Climb the ladder, Bob! This is one of those dunks that appear better because the player doesn’t have effortless hops. I had no idea Covington could get up like that. Color me impressed. Grade: A-

Player of the game

So, I missed two games. Noel is your easy winner from Friday night against the Knicks, and Thomas Robinson isn’t a difficult choice from Sunday at the Lakers. Both players were also very good tonight, but Bobby Buckets gets the nod for POTG in my book. His fourth-quarter explosion is what made this a 50-50 game at the end. Post-Trade Deadline Standings: Noel 8, Smith 5, Covington 4, Grant 3, Thompson 3, Robinson 2, LRMAM 1, Sampson 1, Richardson 1, and Canaan 1.

Since I last recapped a game (sorry, March Madness called), Joel Embiid has started ramping up his workouts again. That’s obviously great news for Sixers fans, because there will always be an element of the unknown present when the 21-year-old center sits out for any period of time, even if it’s precautionary, as his recent time off seems to have been.

"You see him drenched in sweat and shirtless. They are all fantastic signs that his needle is clearly pointing in the right direction," Brown told CSN’s Dei Lynam earlier today. "We are trying to set the stage for a great summer. He sees his reward being the summer league and trying to get ready for playing basketball again. He is headed in the right direction."

I would take that quote to mean Embiid won’t be suiting up this season. At this point, I don’t really see any potential reward to doing so.

First of all, kudos to Vivek Ranadive and the Kings organization for letting Grantland (and by extension, the entire world) into their war room on draft night this past June. In today’s NBA, where information is routinely kept as secret as possible, that takes some kind of guts:

Unfortunately for the Kings, they opened themselves up to quite a bit of mockery if the pick doesn’t hit. When it came time to make a decision, Ranadive appeared to sit in the driver’s seat, not general manager Pete D’Alessandro. That is precisely why the phrases “For me, Stauskas” and “Stauskas? Stauskas” will be used as a joke on Twitter by NBA nerds for at least the near future.

Additional fun fact: In the video, Ranadive and D’Alessandro shoot down the Sixers’ offer of the tenth overall pick and two second-rounders for the eight pick. Maybe for Sam Hinkie, it was Stauskas as well.