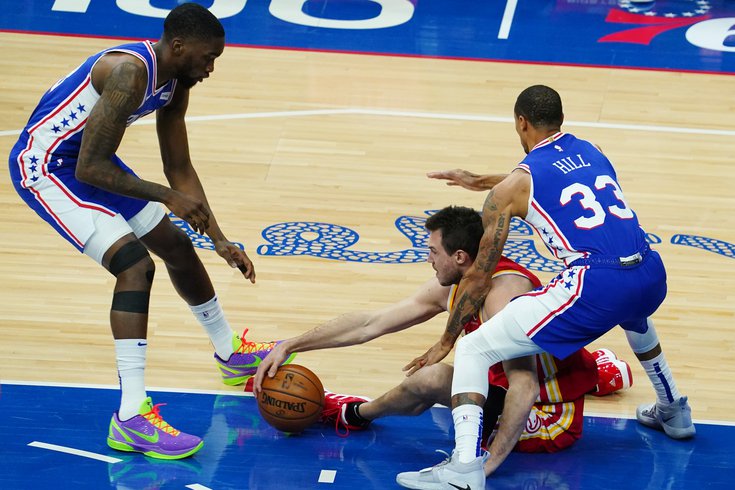 The Hawks got Trae Young back for a Friday night affair in Philly, but the Sixers coasted past Atlanta anyway, earning a 126-104 win that probably allowed many of you to focus your energy on the NFL Draft. And I'm not mad at you for it — that's why I'm here with the recap.

• We've been able to say this more often lately, and it's a great sign for Philadelphia: the Sixers' bench helped change the momentum of this game early. Atlanta was a much different outfit than the one the Sixers blew out of the water on Wednesday, and the starters needed a pick-me-up after a rough start to the game.

The second unit just makes a whole lot more sense (and frankly, looks much more modern) with George Hill on the floor and Matisse Thybulle effectively playing backup four. With three guys on the floor who can credibly attack closeouts in Hill, Shake Milton, and Furkan Korkmaz, the Sixers' effective possession window is larger than it was with the combinations they used early in the year. And that has been aided by a bit of a step forward from Thybulle attacking off of the dribble, even if he still produces hilarious lowlights from time to time.

(All of that being said, it still devolves into the Shake Milton show too often for my liking. There's a noticeable difference when Hill is at the controls, even if he's not the same threat to score as his younger backcourt mate.)

The star of the show, though, was the bench's elder statesman. Dwight Howard's contributions can get taken for granted sometimes because he's mostly just doing the dirty work, but he was terrific during the first half stretch that put the Sixers back in front, and you could argue he was even better in the portion of the game that allowed Philly to put this out of reach, buying the starters some rest for some "old school load management," as the head coach would call it.

Atlanta simply could not handle him on the offensive glass, and extra possessions turned into made shots, free-throws drawn, and even a post-dunk flex or two from Howard, whose strength and athleticism is still remarkable for a guy this deep into his career. Guys grab him by both shoulders and try to hold him down, and he still manages to get a shot up and around the rim more often than not.

You have to consider the opponent, of course, and I'm still not over the moon about an all-bench group as a general premise. But they look better equipped to survive and thrive than they did before Hill entered the picture.

• The one guy in the starting group who can look at the start of the game and feel proud of how he played was Ben Simmons, who frankly was a force of nature for most of the first half. Even before the Hawks started collapsing on defense, Simmons played the aggressor for Philadelphia, challenging the Hawks at the rim as both a driver and an offensive rebounder, hunting his own shot a lot more than usual.

When Atlanta was forced to downsize late in the second quarter, it had an obvious impact for Joel Embiid, who got to go up against John Collins in the post after a tough start to the game. But it was just as impactful for Simmons — without a true rim protector on the floor, the Hawks were drawing dead against any penetration, and Simmons was happy to take advantage of that situation.

One Simmons possession in the first half caught my eye. With George Hill on the floor next to Simmons, the veteran guard seemed to sense Simmons was ready to attack Danilo Galinari if they could simply force the switch. The duo promptly made sure that happened, and Simmons dusted the Italian forward en route to two points at the rim. It's the sort of recognition you covet in a bench guard like Hill, and the sort of sequence you don't often see from Simmons.

Then of course there was the defense, which was a huge part of that dominant run to put the game out of reach late in the second. Simmons came up with a dunk, a terrific steal, and then a lob to Embiid in transition in the span of three plays and less than 30 seconds, bringing the house down with his effort.

That was about enough to break the spirit of the Hawks, who created some decent looks using that lineup but ultimately just caved on defense. Simmons was the guy who led the charge for Philly.

• Tobias Harris is obviously a very gifted offensive player who can be used all over the floor, and the Sixers got value out of him in a variety of ways on Friday night. If not for a couple of well-timed fouls by Hawks players, he would have had a couple of gnarly dunks, and he has embarrassed quite a few guys with moves in the mid-post this year.

But frankly, the Sixers need to keep tapping into Harris' ability to kill teams as a catch-and-shoot player. Doc Rivers did a great job of coaxing him into playing quicker and more assertive to start the year, with that often manifesting in how often he let it fly from three or immediately went to the rim following an opponent's closeout. Friday night, he got to operate in his mid-post foxhole plenty, but that was balanced with some sets where he was the danger man in the weakside corner or free-throw line extended, ready to rip when the ball swung his way.

It wasn't an explosive night for Harris, but a solid one.

• Matisse Thybulle fell victim to some classic Lou Williams grifting tactics on Friday night, but man, it remains fun to watch him go to work on defense.

There are times when his energy is a little too manic, like an elementary school kid who had a little too much Fun Dip, but that's honestly part of the charm. Sometimes he's going to fly into the first row because he's trying to block a jumper he has no chance to get a hand on. Sometimes he closes ground like a ball-hawking safety and ends a transition opportunity for the opponent by himself. His best work is worth sitting through the tough stretches for.

Though you could fault him some for his "discipline" on Friday night, I chalk that up to Sweet Lou being a master of catching guys with their hands in the cookie jar. Thybulle has done a better job of finding the sweet spot this year, sticking to the team's core principles without losing what makes him special.

And I have to say, there have been some excellent flashes for him on offense lately. He's making a more consistent impact as a cutter, he dropped off some nice passes against the Hawks, and there does appear to be some real growth happening.

• Getting George Hill to round out the second unit looks smarter by the day, partially because Hill plays as advertised and partially because it has changed the lineups the Sixers use off of the bench. Mike Scott has been buried and relegated to garbage time usage, and that's the role he's suited for at this point.

• Why exactly did the starters get off to such a slow start? A lot of the blame has to rest at the feet of Joel Embiid, who stumbled out of the blocks even as he paced the Sixers in scoring early. Embiid was unfortunate on an early turnover that looked like it may have bounced off of a Hawks player, but he was sloppy handling the ball in the post and couldn't seem to find a rhythm on offense.

The bigger problem came on defense, though that was a team and scheme issue in addition to an Embiid issue. Choosing to guard Trae Young using a combination of Seth Curry and Danny Green, the Sixers compounded a questionable decision by dropping frequently against Young in pick-and-rolls, which allowed him to make a lot of uncontested runners and floaters while also finding Hawks teammates for lobs over Embiid's head. Gifted as Embiid is as a rim protector, bigs like Clint Capela have given him some issues in the past when paired with pick-and-roll maestros. The inability to deal with that action allowed Atlanta to roll to an early 21-8 lead.

Here's the good news: Embiid and the Sixers would adjust as the game rolled on, showing a bit more in pick-and-roll and at least making Young second guess what he would have to do as he turned the corner around the pick. Philly was fortunate the Hawks missed some clean looks from deep when they spread it out and went small, but it's certainly nice to see some adjustments and active problem solving in-game as the Sixers near the playoffs.

• Boy, did Danny Green stink up the joint against the Hawks. He's pretty notorious for being a hot-and-cold player, and after coming out of the All-Star break on fire, he has settled into a cool period. It's not often you see a high-level shooter airball a jumper and miss a three off the side of the backboard in the space of one game, but Green managed to pull off the feat on Friday.

• I feel like I've been picking on Sixers game ops all season and I promise it's not personal, but playing the Superman theme song AND All Gold Everything by Trinidad James at the same time after a Dwight Howard dunk is just unnecessary and bad. Pick one and roll with it. You can switch back and forth if you want to spice things up, but don't make people's ears bleed by doubling up.

• For the love of all things sacred, man, somebody tell Shake Milton to stop fouling guys with less than five seconds left in quarters. He has had a remarkable number of inexcusable fouls to close out periods lately, and somebody has got to get in his ear about it.