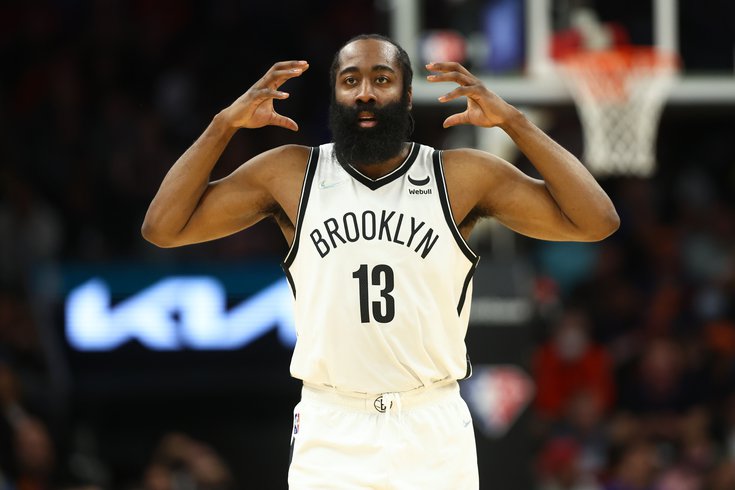 James Harden is now a member of the Philadelphia 76ers after a deal at the NBA trade deadline sent Ben Simmons, Seth Curry, Andre Drummond and two first round draft picks back to the rival Brooklyn Nets.

Good riddance, Ben Simmons. The Philadelphia 76ers pulled the trigger on a franchise-altering trade deadline deal with the Brooklyn Nets to acquire veteran superstar James Harden, who will now pair up with Joel Embiid in pursuit of an NBA title.

The trade marks the culmination of a months-long saga surrounding Simmons, the former No. 1 overall draft pick and Rookie of the Year who failed to develop a jump shot and then requested a trade after critical comments from Doc Rivers and Joel Embiid following a Game 7 loss to the Hawks, leaving Daryl Morey the task of finding the right exit strategy.

Harden, a former league MVP, makes Philadelphia his third home in the span of two years after Brooklyn's big three pairing with Kevin Durant and Kyrie Irving failed to pan out for an assortment of reasons.

Philadelphia gave up fan favorite Seth Curry, a reliable backup center in Andre Drummond and a pair of future first-round picks in the deal for Harden, 32, who has already reportedly opted in to his player option for next season and is in line for a massive contract extension. Philadelphia did not have to part with either of its young talents in Tyrese Maxey and Matisse Thybulle.

The two teams will meet at the Wells Fargo Center on March 10, so you can circle the date for Philadelphia's maniacal welcome to Simmons, assuming he plays.

The emotions of Sixers fans are all over the place right now, but the overwhelming sentiment is joy and relief that the Simmons nightmare is finally at an endpoint. Sure, Philadelphia will still have to deal with Benny and the Nets (you're welcome, Brooklyn headline writers), but the relentless news cycle around Simmons' entitled cowardice can be mostly put to rest. It'll be academic, from here forward.

Joel Embiid reacted to the deal with a powerfully coded statement. The original caption on the meme he shared below is, "I stopped by one of my biggest haters' funeral today just to make sure that [redacted] was dead." So, you know, damn.

As Philadelphia, Brooklyn and the rest of the NBA universe process the trade, here's a look at some of the best reactions to the trade.

.@Wendys after Ben Simmons got traded to a division rival #FrostyFreezeOut pic.twitter.com/TahFpjJtua

and here's a live look at James Harden pic.twitter.com/c7fep8QOh6

My wife won’t let me grow a beard like that, but welcome to Philly @JHarden13 😎😉🏀@SIXERSSTRONG @sixers #philly

i'm not saying he will, but the CBA clearly states that Daryl is allowed to dip his balls on the foreheads of everyone who said he should trade Ben for Buddy Hield

I love that Ben Simmons is going to a place with cold winters and no place to drive his cars. #Sixers #simmons

I feel bad for Seth, He really liked playing here, but because Ben Simmons is a little baby, Seth had to suffer.

Thank you Seth Curry, best of luck to yah 🙏🏼 pic.twitter.com/VrvNERTj9v

We got rid of Ben Simmons and Carson Wentz within a year of each other. Nature is healing

KD trying to get Ben Simmons back to normal pic.twitter.com/EEcXcJEI75

Just blown away by how well Morey played this. Obviously, a bit of fortune involved. Think back to all those theoretical offers writers, fans, etc. have said would've been worth it for the Sixers over the last 6 months. Offers that pale in comparison to getting James Harden.

James Harden after he gets a hold of those Philly cheese steaks pic.twitter.com/8JcDyZDdx9

Ben Simmons, Kyrie and KD all on the same team? The team psychiatrist about to get be like this…. pic.twitter.com/7aCWqTKVnO

Ben Simmons no longer a member of the Philadelphia 76ers what a day pic.twitter.com/fjgUKu12rq

The Sixers had a completely incompetent front office screw up virtually every single decision for multiple years and nearly put the team in purgatory, and they still have managed to come away with Joel Embiid and James Harden. The Process worked.

Ben Simmons vs. James Harden and the 76ers in Game 7 of the Eastern Semi-Finals 😳😳🔥🔥💀💀 pic.twitter.com/MwMbQg1lrF