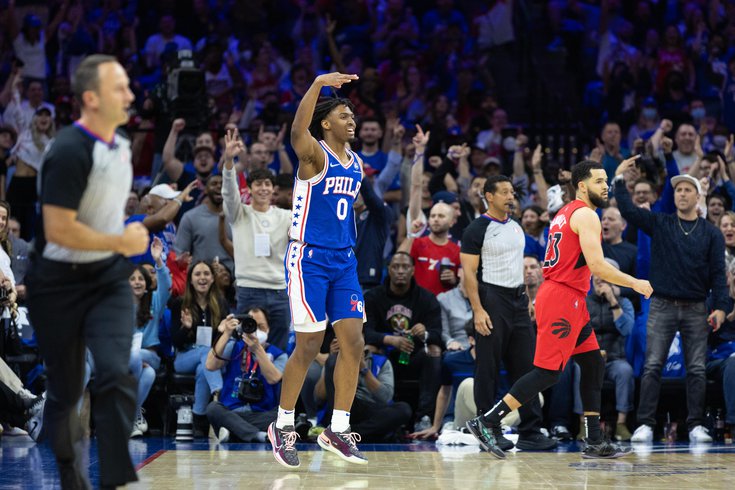 Tyrese Maxey opened the playoffs with a scintillating performance, pouring in 38 points in a 131-111 Sixers win over the Raptors that never got close in the second half.

• If you didn't figure this out when he excelled in surprise fashion during last year's playoffs, let it be known now — Tyrese Maxey has no fear of these moments. He was able to come through for Philadelphia after being put in mothballs for a lot of last season, so you had to think he was prepared to hit the ground running after playing a massive role for Philly this season.

It's still a little jarring, though, for Maxey to be this good at shooting the basketball, this confident to let it fly at basically all times from deep. With the way Toronto is defending No. 21 inside the arc, swing passes are going to find their way to Maxey over and over again in this series, and he kicked off the postseason with a gem of a game from beyond the arc.

That outside shooting ability has turned the hardwood into Maxey's personal playground. When the Raptors played too far up on him, Maxey absolutely dusted Toronto's perimeter defenders, whether they decided to switch an action or play him straight up. By the time he was rolling in the third quarter, they didn't have a clue or a prayer. Precious Achiuwa stood on an island hoping to stop him on one possession late in the third, and Maxey sized up the distance between them and simply said, "Bet."

TYRESE MAXEY IS GOING OFF pic.twitter.com/KwKNW2wuzv

Having Maxey in a role where all he really has to worry about is scoring has allowed him to focus on what he is best at with Harden serving as the lead playmaker. You can see Maxey setting up for his trips to the rim before the ball even gets to him, loaded up in a stance with his defender scrambling. By the time they realize he has the ball in his hands, he's gone in a flash, and Maxey's willingness to challenge bigger guys at the summit has grown over the last two years, the youngster happy to bet on himself to win those battles.

After Scottie Barnes ran him the hell over early in the third quarter, the much smaller Maxey stood up and had something to say to Barnes prior to the flagrant review, calmly knocking down the two shots once he had the opportunity. In that small moment, you can see who Maxey is, as if the rest isn't speaking loudly enough.

• The Sixers could not have asked for a better kickstart from the people in the stands in their home arena, as the Wells Fargo Center was rocking prior to tipoff. But we have seen them waste some primo crowds in the past, and building energy does not always translate to Sixers energy. Mercifully, that was not the case on Saturday night.

Nick Nurse's starting lineup was a subject of some intrigue heading into the game, and he opted to go with their most played starting five of Fred Van Vleet/Gary Trent Jr./Pascal Siakam/OG Anunoby/Barnes. With no true big on the floor, Toronto's length and athleticism advantages as a collective did not matter at all against the biggest dude on the floor. Though Embiid didn't have much time or space to set up shop in the halfcourt, he absolutely bulldozed the Raptors on the offensive glass, digging the Sixers out of a tough shooting start by creating extra possessions.

That answered one big question everyone had coming into the series — would Embiid be content to do the dirty work as the Raptors did their best to force the ball out of his hands? So far, the answer seems like yes, though he had some unnecessary hero ball moments in the second half. He leveraged his size and strength the best way he could, and the work of the collective added up to a pretty easy victory.

Though Embiid promised he was going to play this way when he spoke to reporters during the week, carrying through with that mentality was not a given. And Embiid understanding that this is the way to beat a Toronto team selling out to stop him shows the growth he has undergone over the last few years. An Embiid willing to use his gifts to let the team beat the Raptors is a more dangerous version of a guy who led the entire league in scoring, and he didn't really need to sacrifice much in order to make it happen.

When Embiid had his chances to play one-on-one basketball, he turned in a few highlights of his own. Whether it was Khem Birch, Precious Achiuwa, or any number of long Raptors defenders hanging off of him, Embiid was simply better. The Raptors are supposed to be the transition team, and Embiid showed that he can hurt them with early offense, overpowering them by getting down the floor quickly.

It does not look like Joel Embiid is going to win the MVP award, based on straw polls and Vegas odds and publicly available voting info. In Game 1, he quickly put all that to the side and did what was required to get a comfortable victory, even if it didn't add up to a dominant box score effort.

• This is a Jekyll and Hyde team, so don't expect them to keep this up all series, but the Sixers won in the areas they were supposed to win and took away Toronto's matchup advantages. Toronto would eventually start to leverage their strengths in transition, which tightened up the game some in the second half, but Philadelphia was better on the glass, and a far better team executing in the halfcourt. If those trends continue, a lot of paths to victory vanish for Toronto.

• My favorite James Harden play of the first half, and frankly my favorite play of his from the game, was not any of the assists he sprayed around the floor, was not a jumper he made, and frankly was not any sort of highlight at all. It was James Harden going right past Fred Van Vleet to his right hand, seeing the Toronto defenders waiting at the rim, and deciding, "Screw it, I'm going up anyway," ultimately drawing a foul as he rose up to the basket.

That is a big thing Harden's game has been missing — the desire to go as far as the finish has required. He didn't get a few calls to go his way early, and instead of pouting or avoiding the painted area, he doubled down and kept going.

Keep in mind, that's a small part of all he contributed to Philadelphia's performance on Saturday. Harden continues to leverage his vision at an expert level, and he used any hesitation or missteps from Raptors defenders to find the open shooter somewhere on the floor. The Sixers were a little slow to get rolling from deep but eventually found the range, and Harden feeding them great look after great look played a big part in that.

Seriously, linger on his passing for a moment and enjoy it. With Maxey streaking down the floor in transition and the Sixers looking to stave off a surging Toronto team, Harden hit Maxey with an absolutely ridiculous bounce pass in transition, No. 0 never needing to break his stride before depositing two.

There were some ugly-looking moments for Harden when attacking the basket in this one, and efficiency continues to hold him back. But when he hits stepback threes when the Raptors switch on ball screens, it's not going to matter much if he can't generate as much power going toward the basket.

• In theory, this Raptors team is the sort of group that neutralizes a lot of Tobias Harris' advantages on the offensive end. Build a team filled with wing-sized athletes, and it would seem hard for him to find smaller guys to bully or bigger guys to beat with speed. But he played with excellent pace in the halfcourt, getting up catch-and-shoot looks when they came and beating Raptors players on closeouts for looks closer to the basket.

For weeks now, Harris has looked a lot better in his role within this group, even though he has had issues stringing two good halves together within the same game. How teams defend him, though, is like 75 percent of the battle. With the Raptors forced to respect his outside shot on Saturday, Harris was able to leave Toronto defenders lingering in no man's land, unsure of what he wanted to do at any given moment.

Even his cuts have been timed better lately. Now that Harris has a better understanding of how Harden will operate, he has figured out a way to time his trips toward the basket without shattering the spacing that the team needs to be at their offensive best.

Great start to the postseason for Harris, full stop.

• All the Sixers have ever needed from backup center is for Embiid's understudy to not actively take things off of the table. Though he picked up two fouls in a short stint during the first half, I thought Paul Reed did exactly what was required in this game. He played with energy, he (mostly) stuck to his role, and the Sixers managed to do just fine with him on the floor, holding the fort with Embiid getting a bit of rest.

Was he the fortunate benefactor of some insane Maxey shotmaking? Sure was. But aside from early jitters, he was basically fine. That will be more than enough against most playoff opponents.

• Boy, the days when the Sixers consistently led the league in turnovers feel like a lifetime ago. They probably got away with a few more turnovers than they were "credited" for as a result of block rulings in the box, but as a general rule, they took care of the basketball. That's a big deal against a team that has to win a lot in transition.

• James Harden lit into his teammates on the backside of the defense early in the second quarter, noticeably upset about how his teammates fell asleep on the weakside. In a different game, we would talk about the pot meeting the kettle, but he had a great point on Saturday evening. When he's defending a guy in the post, there's no reason to send aggressive help in his direction, because it's the area on defense where he's undoubtedly at his best.

Instead, the Sixers allowed the Raptors to score some easy buckets by shading too far toward Harden and his man on the left block. Knowing when to send help and to whom is one of those things teams tend to learn with more time together, but that's not a luxury the Sixers have been afforded with this group. As a general rule, you should be happy with letting the Raptors try to win in isolation, and if they manage to do it, you tip your cap. Doing it enough times to win a game is not easy for them.

• One team has a good halfcourt offense, the other doesn't. I said before the series that was a big reason why I was picking the Sixers, and I've seen nothing in Game 1 to suggest that was the wrong idea. The Raptors will presumably be able to leverage their strengths a little better as the series wears on, but their weaknesses are real. And if they lose Scottie Barnes, their strengths are not as pronounced.