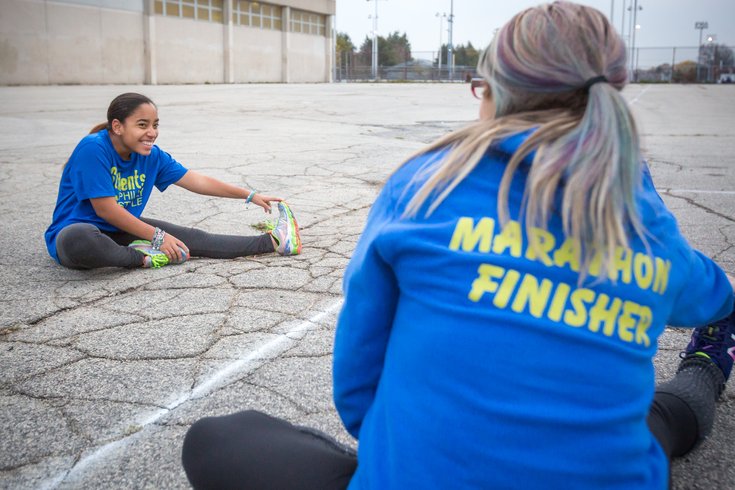 Destiny Lyda was born so tiny that her caretakers dressed her in doll clothes.

Born four months premature, Destiny weighed a mere one pound and four ounces at birth. The doctors at Pennsylvania Hospital did not expect her to survive.

Her mother, Elba Ortiz, worried how her first child — born smaller than many other premature babies who ultimately succumbed to their complications — would make it. But after several stressful months in the neonatal intensive care unit, Destiny came home a healthy child.

"My name was supposed to be Adriana, which is my middle name now, but my parents named me Destiny because it was my destiny that I lived and survived," she said. "I don't remember being in the hospital, but what I hear is that people were really scared and thought I was going to die. It was just really scary."

Sixteen years later, Destiny is ready to complete the Philadelphia Marathon, her first attempt at 26.2 miles. It's a tall task for a teenager, but Destiny is well-prepared.

Her running pursuits, which she began four years ago with a 5K race, have turned into a family affair. Her younger sister, Briana, will run the half-marathon on Saturday. Their nine-year-old sister is waiting in the wings.

And their mother, who occasionally joins them for shorter distances, could not be more proud.

"In the beginning, (Destiny) wanted to give up," Elba said. "In the very beginning, I was like, 'No, you can't give up. Try just a little bit more.' She loves it." 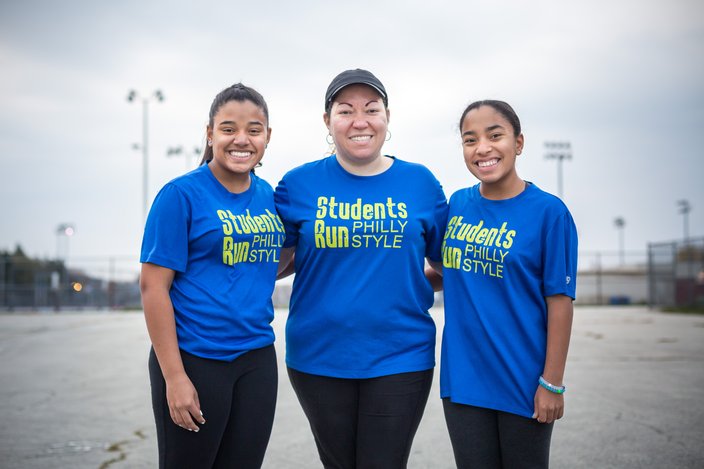 Elba Ortiz, center, stands alongside her daughters at Labrum Middle School on Wednesday, Nov. 16, 2016. Briana Lyda, 13, left, and Destiny Lyda, 16, right, participate in Students Run Philly Style, a program that uses running as a catalyst to set and achieve goals.

Destiny and Briana are two of 234 runners participating in this weekend's races through Students Run Philly Style, a program that uses long-distance running as a catalyst for mentoring.

Students, ages 12 to 18, spend up to 10 hours a week running with volunteer mentors who help prepare them for races like the Broad Street Run and the Philadelphia Marathon.

Destiny, now a sophomore at the Arts Academy at Benjamin Rush in the Far Northeast, first learned of the program when she was in fifth grade. She was intrigued, but had to wait until sixth grade to join.

But like many new runners, Destiny found the initial runs a challenge. Her running mentor, Stefanie Londo, remembers one of their first runs together — a trying three-mile run at a summer camp in 2013.

"I don't know how I'm going to feel. I don't want to give up at 20, because that's the longest I ever ran. But I want to keep going and not be tired." – Destiny Lyda, on running her first marathon this Sunday

"The girls go out and finish and come back," said Londo, who also taught Destiny at Labrum Middle School."Then the boys started and finish and came back. We were still out there trying to struggle with these three miles. We finished it and were like, 'We're going to get to the Philadelphia Half Marathon.' And we did it."

So, Destiny is ready for a new challenge. But she said the decision to enter the full marathon was not easy.

"I had to do three half-marathons before I finally decided," Destiny said. "But it was really Miss Londo who encouraged me and pushed me to do the full. And I think I was ready. Because (after) three half marathons, just do a full already. And I really want a blue hoodie."

Students Run Philly Style awards each of its marathon finishers with a blue hooded-sweatshirt honoring their achievement. Half-marathon finishers receive a long-sleeve T-shirt. Every runner receive two pairs of New Balance sneakers to ensure they train in proper footwear.

Training begins in March, with many students running the Broad Street Run. After a break, training picks back up in the summer with an eye toward a longer race — either the half-marathon or a full marathon. 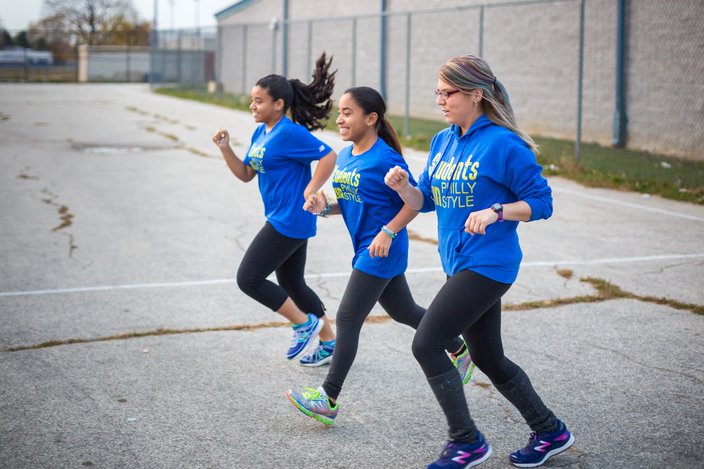 For many students, those distances seem daunting. But the sense of accomplishment that follows can prove addicting.

Briana remembers the pride she felt when she completed her first half-marathon last fall. It came after years of watching her sister run while counting down the days until she could join her.

"It was hard," said Briana, an eighth-grade student at Labrum Middle School. "But when I was done, I was like, 'That wasn't so bad. What was I so nervous for?' I felt really accomplished and I felt really happy. I just wanted to run more — not at that moment, but throughout the years."

One day, Briana said, she just might attempt a marathon herself. On Sunday, she'll be cheering Destiny as she chases that goal.

Destiny's training program topped out with a 20-mile run before tapering off, as many training plans do. Come Sunday, she'll still have another six miles to complete when she reaches that point.

"I don't know how I'm going to feel," Destiny said. "I don't want to give up at 20, because that's the longest I ever ran. But I want to keep going and not be tired."

The marathon stands as an obstacle, but Destiny has shown she's a survivor. As proof, her family still has her old doll clothes tucked away in their basement.