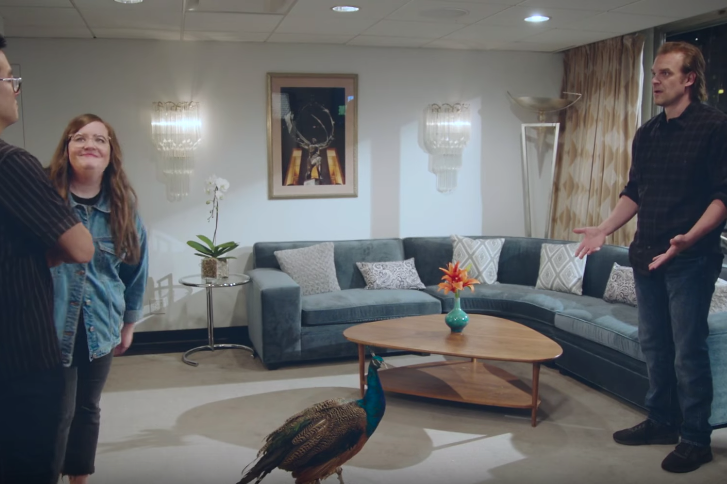 'Saturday Night Live' returns this Saturday with first-time host David Harbour and musical guest Camila Cabello. The 'Stranger Things' actor will have to share his dressing room with the NBC peacock, and he's not exactly happy about it.

"Saturday Night Live" is back Saturday with "Stranger Things" star David Harbour and he, um, has a bit of a problem with his dressing room.

Aidy Bryant and newbie cast-member Bowen Yang are pleasantly chatting about Yang's, apparently, really bad jewelry line and eating salads (with seemingly no dressing on it for some insane unknown reason) when Harbour approaches them with a very particular issue.

Turns out, there's a peacock in his dressing room, and he's a bit confused how it even got there. Bryant and Bowen immediately inform him that this is not just any peacock, it is the NBC peacock.

The "SNL" first-timer wants to know how to kick him out. But, excuse you, David, one does not kick out the NBC peacock.  You see, he has a lot of powerful friends in the industry and even abroad, so kicking him out would kind of be a big deal. Harbour will just have to make do and become buddies with him. It's cool, though. He bites.

Harbour will be joined on the show by musical guest Camila Cabello. This will be the last new "Saturday Night Live" before a three-week hiatus. The show will return on Nov. 2 with Kristen Stewart as host.