Schools close as snowfall expected to continue through mid-afternoon 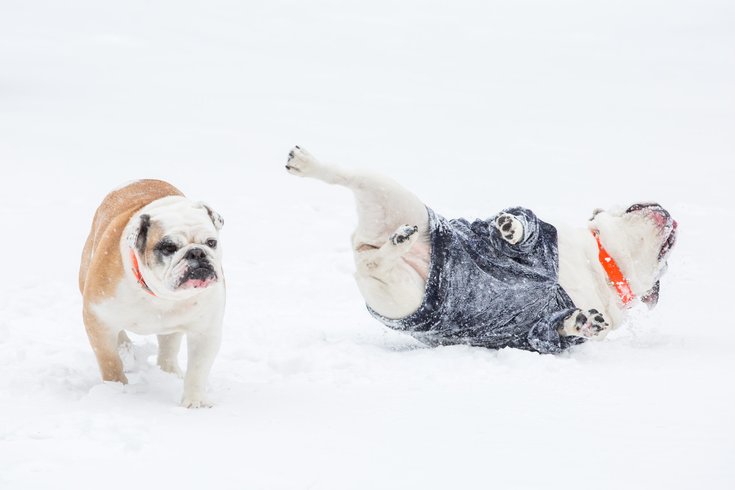 Two English Bulldogs, Mayple and Bryndle, play in the snow at the Piazza in Northern Liberties during Thursday's snowstorm, Jan. 4, 2018.

Public and archdiocesan schools in Philadelphia will remain closed on Friday in the aftermath of Thursday's winter storm and impending frigid temperatures and bone-rattling wind chills.

In the Philadelphia district, all after-school activities including athletic programs and professional development sessions slated through Sunday are canceled as well. All district early childhood centers will also be closed. School district headquarters will be open Friday but on a two-hour delay.

"This decision was made in the wake of today’s storm," a statement from the archdiocese read. "It follows reports from the National Weather Service projecting that the next 60 hours will feature dangerously low temperatures, winds gusting 35-40 miles an hour, and wind chills between 0 degrees and -5 degrees."

The City of Philadelphia will also shut down for the day.

“The decision to close is a difficult one, but we believe that the frigid temperatures will result in icy roadways in the morning that will be resistant to our salting efforts,” said Managing Director Mike DiBerardinis.  “We need to keep drivers off the roads. So we have decided to close all municipal offices. Non-essential City employees should stay home and stay warm.”

Thursday's snowstorm, which seemed to deliver on the low end of the predicted 4-8 inches of snow in the Philadelphia area, slowed – and in some cases, halted – the Thursday morning commute. And the afternoon was not going much better.

The Philadelphia streets department was busy clearing the roadways, with some 375 trucks clearing snow from the city's primary, secondary and tertiary streets.

"Right now, we switched from a salting operation to a salt-and-plow operation," Chief Highway Engineer Steve Lorenz told reporters at 11 a.m. "We think there's enough snow on the street to effectively push it off to the side."

PHOTOS: A snow day in Philadelphia and beyond

About two inches of snow had accumulated throughout the city by 9 a.m., delaying public transportation, canceling flights and closing schools.

Lorenz was not sure when the city's streets will be completely cleared.

"It all depends on the timing of the storm," Lorenz said. "Right now, we're looking at the storm being done by 3 or 4 (p.m.). We're hoping to have everything opened by tomorrow morning, at least the primaries and the secondaries."

That operation could be complicated by the heavy winds that are expected to follow, causing drifting along open areas and blowing snow off the high rises in Center City.

Even as the storm moves out of the area, strong winds will increase throughout the day. Winds gusts of up to 40 mph – and as high as 60 mph along the coastline – are expected as temperatures sink to frigid levels on Friday.

The Warminster line had trains running more than 40 minutes behind schedule, with two trains canceling service between Suburban Station and Warminster.

Other lines, including those traveling to Doylestown, Malvern and Fox Chase were running more than 20 minutes late.

Similarly, PATCO trains are operating on a special snow schedule.

At least two bus lines – routes 35 and 120 – were suspended until further notice.

A SEPTA spokesman said late Thursday morning there is no indication the transit authority would shut down its system, shooting down a rumor that suggested otherwise.

According to Amtrak, Keystone Service between Harrisburg and Philadelphia is operating as scheduled.

All Philadelphia public and archdiocesan schools – as well as scores of schools in South Jersey and the Pennsylvania suburbs – were closed Thursday. Philly public schools will be closed again Friday.

Both Drexel University and the University of Pennsylvania remained open.

Philadelphia City Hall was open for regular business. City courts opened as well – jurors were told to report as usual – but they will now close at noon due to the deteriorating conditions. Courthouses in Chester, Delaware and Montgomery counties closed for the day. In Bucks County, court offices were open on a normal schedule but jurors were told to stay home. 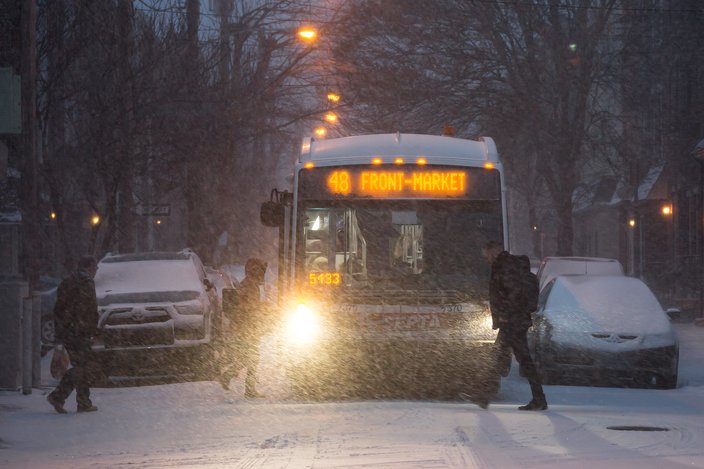 Commuters board the 48 bus at 23rd and Brown streets in the Fairmount section of the city as snow falls early Thursday morning, Jan. 4, 2018.

Early this morning there were several reported in South Jersey, including an accident and trailer trailer fire on southbound I-295 in Carney’s Point, Salem County and a pair of accidents on the Garden State Parkway at the Jersey Shore.

Multi-vehicle accidents were reported this morning on the Schuylkill Expressway – one at the junction with I-476 and the other between the Gladwyne and Conshohocken exits. Another was reported on Route 1 near the Kelly Drive exit.

In Lower Moreland, a motorist died when a vehicle was struck by a SEPTA train on the West Trenton Line about 10 a.m. in the 300 block of Red Lion Road. It was uncertain if the accident was weather-related.

Weather-related speed restrictions on many area highways and bridges were also in effect.

Speed was restricted to 35 mph on the Ben Franklin, Betsy Ross and Commodore Barry bridges, as well as the New Jersey Turnpike and the Garden State Parkway. The Walt Whitman Bridge was limited to 25 mph.

Speed on the Pennsylvania Turnpike – Morgantown to the New Jersey state line – and the Northeast Extension – as far north as Lansdale – was restricted to 45 mph.

Many highways in the Philadelphia area were reported wet with freezing conditions. Forecasters have warned that the morning and evening commutes on Thursday would be difficult, with frigid temperatures allowing snow to lay on streets and increasingly strong winds blowing snow, creating drifts and hampering visibility – even when the precipitation stops this afternoon.

Philadelphia International Airport officials are advising passengers to check their flight status before travelling to the airport.

Dozens of flights traveling into or from Philly have been canceled. Flights operated by each of the major airlines – American, Frontier, Delta, Spirit, JetBlue and Southwest – are affected.

Some airlines are waiving fees to change itineraries for travel to – or from – some destinations.

For now, PECO, PSEG and Atlantic City Electric are not reporting widespread outages due to the weather. Along the Jersey Shore coast, where winds were expected to gust at 60 mph, some downed wires have been reported, but the outages are relatively few with a small number of affected customers. An outage late Friday afternoon was affecting about 900 PECO customers in Warminster Township, Bucks County due to an electrical problem. Service was expected to be restored within a couple hours.

Forecasters had warned that power lines laden with heavy snow and buffeted by very strong winds would be susceptible to coming down. That remains a threat through Thursday night as winds strengthen throughout the day across the region.

PPA will offer discounted parking in Center City garages during the Snow Emergency to help lessen the amount of cars parking on the street. Through the end of the Snow Emergency, a special 24-hour flat rate of $5 is available at the following parking facilities:

Philadelphia prisons: All inmate visits are canceled Thursday for all jails in Philadelphia County.

Due to the New Year’s holiday, collections were already one day behind this week; therefore, Wednesdays materials will be picked up on Friday; Friday’s materials picked up on Saturday.

There will be no collections in driveways for the remainder of the week. Residents should place materials at curbside, in front of their homes, to be picked up.