Over 20 landmarks were recommended, including Lucy the Elephant in Margate and Walt Whitman's neighborhood in Camden 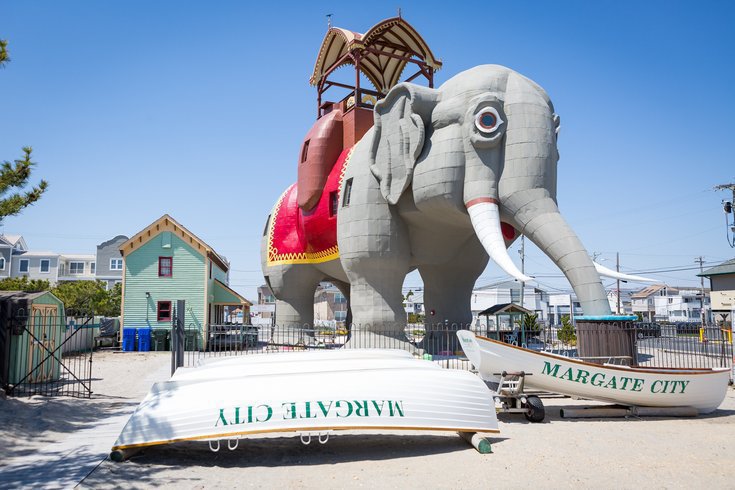 Lucy The Elephant, Margate's famous roadside attraction, is one of 20 South Jersey historic landmarks that could receive a portion of $15.5 million in state grant funding to support preservation and tourism efforts throughout New Jersey. If passed, Lucy the Elephant's ongoing restoration project could receive $750,000 from the state.

Over 20 historic sites throughout South Jersey are nearly set to receive a portion of $15.8 million in grants earmarked for preservation and heritage tourism efforts across the state.

The New Jersey Historic Trust voted unanimously to approve funding recommendations for 65 total projects. If the funding is approved by the Garden State Preservation Trust at its meeting in November, the proposal will head to the state legislature for a vote. It would then go to Gov. Phil Murphy's desk for final approval before being distributed.

Among the most notable projects being recommended for funding is Lucy The Elephant, a famous roadside attraction in Margate that has been undergoing a massive restoration project since 2021. An organization devoted to the project, the Save Lucy Committee, could receive $669,133 to support its preservation.

"The New Jersey Historic Trust is committed to its mission of saving and telling New Jersey's history," said Lt. Gov. Sheila Oliver. "This round of grant recommendations for preservation planning, heritage tourism, and capital projects will help to preserve historic structures, documents, and artifacts that tell the story of New Jersey's history for future generations."

Some historic projects could receive as much as $750,000, including the site of the U.S.S. New Jersey, a Naval ship that was active during World War II, the Korean War, the Vietnam War, and the Lebanese Civil War. It has been housed at the Home Port Alliance in Camden since 2001.

Also housed in Camden is the former home of Walt Whitman, where the prolific 19th century poet spent his final days. This site is already the home of an historic landmark — the Walt Whitman House – but a recommended $750,000 grant could establish the entire neighborhood as a landmark in Camden.

The Benjamin Cooper House on 60 Erie St. in North Camden could receive $750,000 to support its restoration as a ferry stop and tavern, as well as an historic residence. The building, which was first built in 1734, suffered extensive damage during a fire on Thanksgiving Day in 2012.

Greenfield Hall, which houses the Historical Society of Haddonfield, could receive $150,000 as part of the Historic Trust's recommendations.

Have you been to the Walt Whitman House Historic Site in Camden? Constructed in 1848, this modest wooden-framed structure was the only home ever owned by Walt Whitman.

The Moorestown Community House in Burlington County could receive $34,000 to support its mission to be a gathering place for residents of Moorestown and the greater community. First opened in 1926, the building runs almost entirely on rental fees from weddings and corporate events, and has never received funding from the state government.

The Fernbrook Farm Historic District in Chesterfield Township is set to receive $150,000 to continue operation of the 230-acre produce farm, playhouse, and gathering space. Other sites in Burlington County that could receive funding include Fenwick Manor in Pemberton Township, White Hill Mansion in Fieldsboro, and the Vincentown Historic District in Southampton.

"I am grateful that we were able to fund so many worthy projects this year, especially when you consider the challenges our historic sites have endured over the past few years," said Dorothy Guzzo, executive director of the New Jersey Historic Trust. "These projects will create jobs to bolster the economy and sustain our heritage for years to come."

The Millville Army Air Field became the country's first "defense airport" when it opened in 1941. The buildings are currently underused and operate as a museum, according to the New Jersey Historic Trust. It could receive $22,500 to continue rehabilitating the buildings to improve tourism. The Swedish Granary in Greenwich Township, Cumberland County, could be bolstered with more than $11,000.

The Emlen Physick Estate in Cape May is a Victorian house museum providing a first-hand look at 19th century architecture. First built in 1879, the 18-room mansion that was restored for use as a museum more than 50 years ago. The museum could receive $61,845 to maintain its building, as well as $110,000 for additional preservation efforts.

In 2021, St. Mary by-the-Sea, a religious retreat in Cape May Point owned by the Philadelphia-based Sisters of St. Joseph's, became a science education center after being shuttered for more than a year due to the COVID-19 pandemic. In the late 19th century, the property was the Shoreham Hotel of Cape May Point. If approved, the Cape May Point Science Center would receive $59,955 to manage the site and protect it from storm damage.

Other landmarks in Cape May County that could see funding include the John Holmes House, Historic Cold Spring Village, and Hangar No. 1, which is housed in Lower Township.

Happy 234th Birthday to the #GardenState! 📸: USS New Jersey (BB 16) at Boston, MA on May 3, 1919. After being commissioned in 1906, New Jersey would participate in the Great White Fleet's cruise around the World just a year later. @NJGov pic.twitter.com/gUDdDh5leT

Atlantic City Fire Station No. 4 could receive $50,000 to preserve its building as part of the state grant initiative.

There are also two special projects that could receive funding — $550,000 to begin a master plan for the Delaware and Raritan Canal in Princeton and $99,789 for a survey of civil rights sites in Camden.

Some other landmarks include the Liberty Museum in Union County and continued work on public libraries in East Trenton and Hoboken. A number of government buildings, including City Hall in Hoboken and Newark, could each receive $750,000.

No sites in Gloucester County were recommended. Before funding can be made available to these historic sites, the state legislature must approve a bill for Murphy's signature.

In previous years, recommended projects have been approved by the legislature by the end of the year or the beginning of the following year, DCA spokesperson Lisa Ryan told NJ.com.