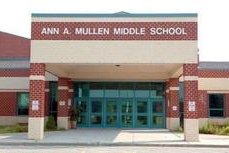 A South Jersey middle school was evacuated Monday afternoon after police say they were informed of a bomb threat.

Police say officials at Ann A. Mullen Middle School in Sicklerville, Gloucester Township, told them around 1:20 p.m. that the threat was found written on a bathroom wall.

The school evacuated students and faculty, transporting them to nearby Timber Creek Regional High School because of inclement weather.

The Camden County Sheriff’s Department's explosive detection canines performed an interior and exterior sweep of the school, but no hazardous device has been located at this time, police say.