$2,000 stimulus checks will be top priority for Democrats, Schumer says 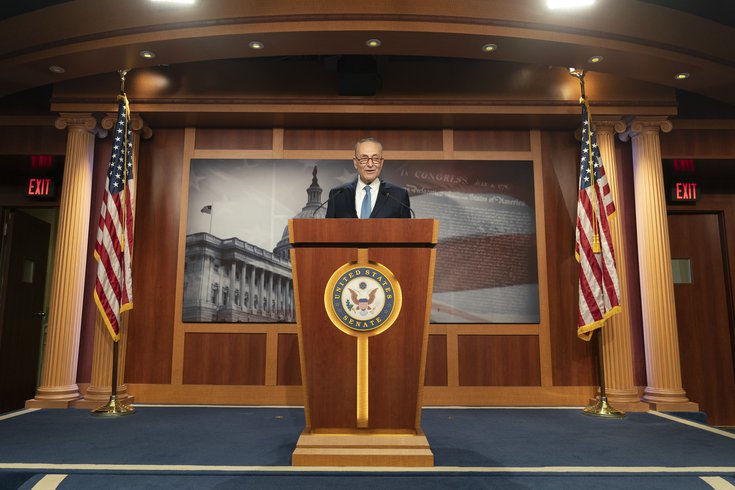 Sen. Chuck Schumer, D-New York, is expected to become Senate Majority Leader next week and will lead the charge to increase stimulus payments to Americans from $600 to $2,000, he wrote in a letter to colleagues this week.

Presumptive U.S. Senate Majority Leader Chuck Schumer sent a strong message to Democratic colleagues Tuesday that increasing stimulus relief to $2,000 will be one of the first orders of business for the coming year.

The New York senator wrote a letter to colleagues outlining goals for the chamber, which will shift to Democratic control once Georgia Sens. Raphael Warnock and Joe Ossoff are sworn into office and after Vice President-elect Kamala Harris takes the oath at the inauguration.

"The job of COVID emergency relief is far from complete," Schumer wrote. "Democrats wanted to do much more in the last bill and promised to do more, if given the opportunity, to increase direct payments to $2,000 — we will get that done."

The stimulus bill that passed in December included up to a $600 payment for most adults in the U.S., with an additional $600 per child provided to families with kids younger than 17. The IRS had sent out about 80% of these payments by the end of last week, but those who are eligible and haven't yet received the funds can still track their payment online.

Democrats had pushed for $2,000 stimulus payments while the bill was debated, finding rare common ground with President Donald Trump, who had threatened not to sign the relief bill into law unless payments were increased from $600 to $2,000.

Trump ultimately signed the $900 billion legislation after the Senate, led by Sen. Mitch McConnell, the current majority leader, refused to debate the bill unless lawmakers considered other matters opposed by Democrats at the same time.

The first stimulus bill, which distributed funds to Americans last April, included individual payments of up to $1,200.

Under Schumer's direction, Senate Democrats would quickly take up the issue to provide qualified Americans with up to an additional $1,400 stimulus payment.

"We will immediately set to work to deliver on that goal," Schumer wrote. "As our first order of legislative business, please prepare to address additional COVID emergency relief legislation."

President-elect Joe Biden, who will be inaugurated on Jan. 20, supports the $2,000 stimulus payment, and Harris has been vocal about the need for more direct aid to Americans.

Schumer also signaled that Democrats would make it a priority to provide much-needed relief to states and local governments, additional support for small businesses, and more dedicated funding for COVID-19 vaccine distribution.

The letter did not discuss how a potential Senate impeachment trial for Donald Trump would interfere with efforts to get new stimulus legislation off the ground.

Even with an incoming majority, it's still unclear whether Democrats will be able to garner the votes necessary to approve $2,000 checks.

West Virginia Sen. Joe Manchin, a moderate Democrat, told the Washington Post last week that he opposes the idea of another stimulus payment. He argued the Senate's primary focus should be on vaccination.

Still, Schumer said Democrats will not waste time before addressing the matter of more direct aid.

"As soon as the new Senate is organized and Vice-President Harris has been sworn in, we will immediately set to work to deliver on that goal," Schumer said.