At Republican National Convention, South Jersey congressman to explain why he left Democrats 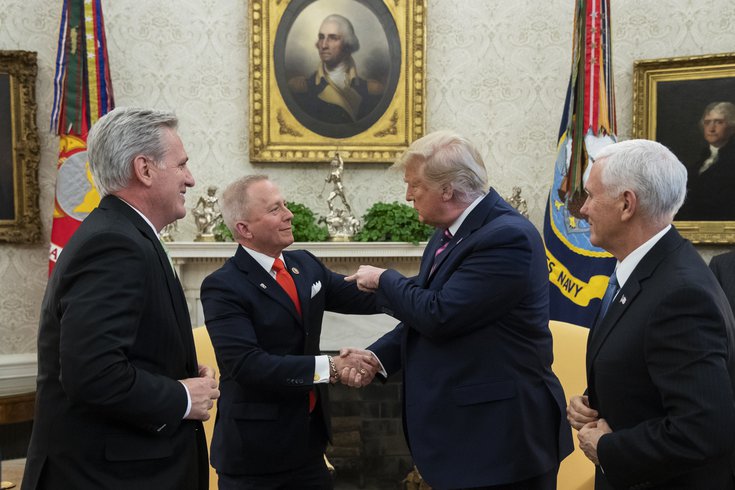 U.S. Rep. Jeff Van Drew, a lifelong Democrat until switching political parties late last year, will be among the featured speakers at the Republican National Convention.

The South Jersey congressman is scheduled to appear Thursday, the final night of the four-day event, according to President Donald Trump's re-election campaign.

Van Drew told The Press of Atlantic City that his six-minute speech will highlight South Jersey, the reason he joined the Republican Party and his opposition to Joe Biden, the Democratic presidential nominee.

"This is the greatest election since the Civil War," Van Drew told the newspaper. "Don't vote for Joe Biden just because your grandparents were Democrats. Mine were, too."

The GOP Convention, which kicked off Monday, mostly will be virtual due to the COVID-19 pandemic. It originally was slated to be held in Charlotte, North Carolina, but only a few portions of the convention will still be held in the Queen City.

Conway, a Camden County native, announced Sunday that she will be leaving the White House at the end of August to focus more time on her family. Her 15-year-old daughter, Claudia, wrote on Twitter that she is "officially pushing for emancipation," saying she was "DEVASTATED" Conway is speaking at the RNC.

Conway has been one of Trump's most ardent supporters since before he took office. She served as Trump's campaign manager in 2016 after previously supporting Ted Cruz.

By contrast, Van Drew became a Republican after voting against Trump's impeachment – one of just two Democratic congressman to do so.

He had been elected to the House of Representatives as a Democrat in 2018, flipping New Jersey's 2nd Congressional District from Republican control after a long career serving in the New Jersey state legislature.

Van Drew has said his top priority in Congress is to bring economic opportunities and jobs to South Jersey. His platform calls for reforming to the country's tax and health care systems, as well as supporting trade policies that help the South Jersey economy. He's also pushed for more bipartisanship in Congress.