14-year-old has not been seen since Thursday 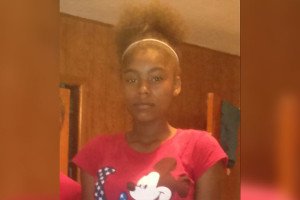 La'Mya Green, 14, has been missing since Thursday. Police are hoping the public can help locate the missing girl as she has a medical condition and needs medication.

Philadelphia police are seeking the public's help in locating a 14-year-old girl who has been reported missing since Thursday, Oct. 22.

Police said that La'Mya Green, 14, a freshman at Northeast High School, which is located at 1601 Cottman Ave., was last seen near the school at approximately 3:07 p.m. that day.

Green lives on the 6600 block of Sylvester St., police said.

On the day she disappeared, Green was wearing a white shirt with tan pants and a pink hooded sweatshirt, police said.

Law enforcement officials said the girl is known to frequent the Rolling Thunder Skating Rink located at 7017 Roosevelt Blvd., as well as areas of South Philadelphia and North Philadelphia.

Anyone with information on Green's whereabouts is asked to contact the Philadelphia Police's Northeast Detective Division at (215) 686-3153/3154 or call 911.

Tips can also be sent anonymously to police here.