Kane Ivers-Osthus had more than 80 transfusions. They saved his life 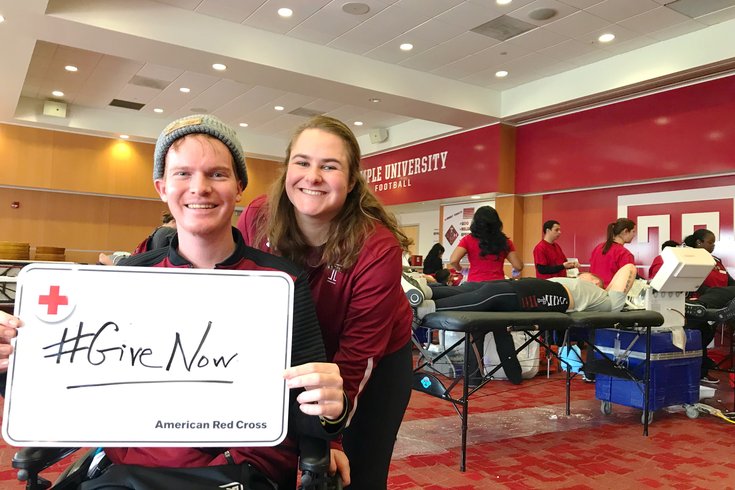 Kane Ivers-Osthus, left, and his girlfriend, Sarah Galbraith, pose during a blood drive last fall to support his battle against leukemia. Ivers-Osthus, an assistant equipment manager for the Temple University football team, needed more than 80 blood transfusions during a weeks-long hospital stay. They encourage others to consider becoming blood donors.

Labor Day weekend was supposed to mark an exciting end of summer for Kane Ivers-Osthus. The Temple University football team was opening its season against Villanova and his parents were visiting from Florida for the big game.

But as the weekend got underway, the Owls assistant equipment manager felt ill. His skin grew pale and eventually yellow. His spleen inflamed.

A trip to Temple University Hospital resulted in some tough news: Ivers-Osthus, 24, had leukemia. He was placed into a medically-induced coma and needed several blood transfusions.

"That blood saved his life in the critical hours," said Sarah Galbraith, Kane's girlfriend. "You don't get a transfusion unless you need it. It's miraculous."

By the time Ivers-Osthus was released from the Hospital of the University of Pennsylvania in mid-October, he had survived a life-threatening reaction to his initial treatment and received more than 80 blood transfusions.

Tests no longer show signs of cancer, Galbraith said, but his body still has the mechanisms to produce cancerous cells.

"He's still in the thick of it," she said. "It's amazing, because I didn't know how this was going to turn out and it was so scary. I would like to say I'm a glass half-full person, but I always prepare for the worse. It's really rewarding to see how he's turned around."

Kane said his leukemia battle has taught him to appreciate life's little things and revealed how much people cared about him. But it also underscored another lesson – the importance of donating blood.

"This area is an important region because of how big our trauma centers are and our population. It's safe to say when people donate in this area, the blood always stays in this area." – Guy Triano, CEO, American Red Cross of Southeastern Pennsylvania.

"I didn't realize how big of a blood shortage there was in Philadelphia," Kane said. "(Galbraith) and Temple football put a blood drive together in honor of me. They said that was the most successful one they've had in recent Philadelphia history."

A NEED FOR DONORS

The American Red Cross must collect more than 13,000 blood donations every day to meet hospital and patient demand, including 800 in the Penn Jersey region, an area that includes all of New Jersey, Delaware and the five Southeastern Pennsylvania counties.

When the Red Cross has less than a three-day supply of most blood types – as it did earlier this month – officials issue an emergency appeal for blood and platelet donations. All told, the Red Cross supplies about 40 percent of the nation's blood and blood components.

Blood products are perishable. Red blood cells must be used within 42 days of donation. For platelets, a critical clotting component often needed by cancer patients, the shelf life is even shorter – five days.

"This area is an important region because of how big our trauma centers are and our population," said Guy Triano, chief executive officer of the American Red Cross of Southeastern Pennsylvania. "It's safe to say when people donate in this area, the blood always stays in this area."

But blood products are needed by people with varying conditions. They are regularly used during organ transplant surgeries, trauma care and cancer treatments. Patients with sickle cell disease, autoimmune disorders and other chronic illnesses often require blood, too.

Because the blood supply must constantly be replenished, Triano said the Red Cross strives to establish lifelong donors by holding blood drives at schools. Last year, high school and college-age students accounted for 20 percent of all collections.

"Our big focus is not to age out our donors," Triano said. "We try to focus our attention on high school and colleges. It's the biggest population for us. "

'THEY SAVED HIS LIFE'

Watching Ivers-Osthus battle leukemia was the most difficult moment of her life, Galbraith said. He received transfusion after transfusion until his release from HUP on October 17. Now, he receives frequent chemotherapy treatments.

"It was pretty surreal how the world did a 180 on us," Galbraith said. "It really showed us who mattered in the world and who we could rely on and how important it is to take care of yourself."

Galbraith wanted to help in a bigger way. So she helped organize a blood drive at Edberg-Olson Hall, the home of Temple's football program.

"The people who donated blood – they saved his life." – Sarah Galbraith, girlfriend of Kane Ivers-Osthus

By the time the event was held, on November 11, Ivers-Osthus had been transferred to Magee Rehabilitation Hospital, where he remains in an outpatient program. Nearly 130 people – many associated with Temple – showed up to give blood, and more than 100 units were collected.

"It was really rewarding to organize the blood drive," Galbraith said. "We know we had a good team, a good army. Having them come out and fight for Kane was amazing."

Ivers-Osthus said he can remember little of his hospitalization, because he was in a coma for much of it. But he said all the support gave him a reason to keep fighting.

"It's been kinda crazy," he said. "I wouldn't say you think you're invincible, but you don't think this would ever happen to you. And then sure enough, it flips your whole world upside down. It shows you to appreciate the little things in life and the things people do for you."

Both he and Galbraith urge people to consider donating blood, knowing well that it can save lives.

"The people who donated blood – they saved his life," Galbraith said.

The American Red Cross of Southeastern Pennsylvania hosts about 25 blood drives each weekday, Triano said. It holds another 15-20 donor events on Saturdays and Sundays.

Potential donors can find a list of public blood drives by visiting RedCrossBlood.org. They also can schedule an appointment on the website or by calling 1-800-RED-CROSS.