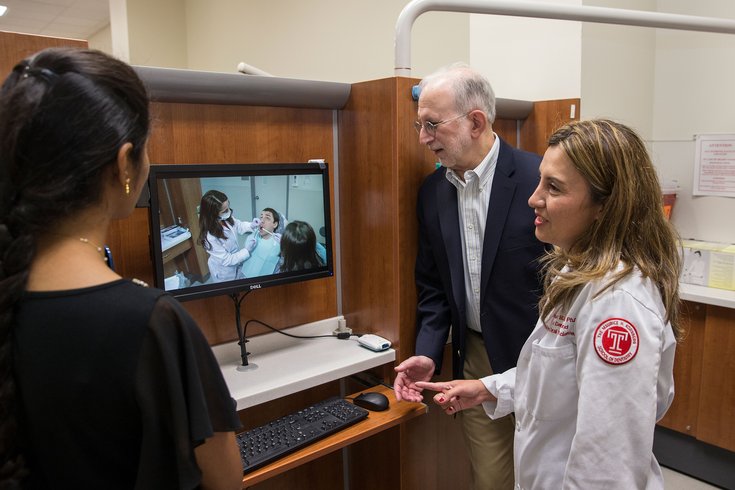 For many people, a trip to the dentist invokes a good deal of anxiety.

Countless people have put off a dental visit – even as a tooth is ringing with pain.

"The primary source of dental anxiety is fear of the experience of pain and that that pain might go quite a bit more extreme than the person is prepared to deal with," said Richard G. Heimberg, a Temple University psychology professor. "But there are a number of other kinds of things that can get in the way."

Some people are embarrassed about their teeth, Heimberg said. Others fear the dentist might inadvertently cause the problem to worsen. And some fear the dentist will detect all sorts of other issues.

But avoiding the dentist can lead to even greater problems down the road – and issues that often require more invasive and expensive procedures.

That's why Temple's dentistry and psychology researchers are studying ways to combat dental anxiety. They just landed a $2.59 million grant to launch a five-year clinical trial for 450 patients at Temple's Faculty Dental Practice in North Philadelphia.

Heimberg, who runs the Adult Anxiety Clinic of Temple, is teaming with dentistry professor Marisol Tellez Merchán to lead research efforts. They have developed a series of videos designed to help patients turn anxious thoughts into coping thoughts.

"Patients with dental anxiety are overrepresented in emergency care," Heimberg said. "They might wait to the point where the anxiety no longer exceeds the level of pain. But once they do that, the condition they may be seeking treatment for is actually worse."

They may need greater intervention and that, in turn, reinforces their anxiety.

Previous research indicates that about 10 to 20 percent of patients experience some form of dental anxiety, Tellez Merchán said.

The new clinic will study patients who are anxious, but still seeking treatment.

Each patient will be asked to identify the three dental procedures that bring them the most anxiety. They can choose from among six procedures – cleanings, X-rays, cavity fillings, root canals, injections and extractions.

The patient will then watch three videos on each topic, an effort to gradually help them become more comfortable with the procedure.

The first video shows the procedure from a distance while providing an educational overview of the procedure, exploring how it works and detailing the tools used.

"It's all the things patients avoid thinking about," Heimberg said. "For that part of it, it goes on the model that knowledge will set you free."

The other videos teach patients how to respond to anxious thoughts.

If you've ever been anxious in your life, you understand that those thoughts build on each other," Heimberg said. "They come in waves. They get worse and they get worse."

The second video shows a patient's face as the procedure is conducted. A voiceover includes instructions on how to identify anxious thoughts and how to transform them into coping thoughts.

The third video shows the procedure from the patient's viewpoint. The audio includes the patients responding to anxious thoughts with coping mechanisms.

In the case of dental anxiety, Heimberg said patients actively must remind themselves that they are being treated by a trained professional who is experienced in pain management. They should recall positive prior experiences, including procedures successfully endured.

"The general idea is having an anxious thought is not necessarily something the person can control," Heimberg said. "They either can endorse it and get into it, or they can step back from it and think about it in a more realistic way. That's not going to make the anxiety go away, but it may stop the anxiety escalation."

A previous study conducted by the researchers – using a similar intervention – reduced dental anxiety by about 33 percent, Tellez Merchán said.

But the clinical study has another aim.

Researchers want to know whether dental assistants can assist the patient through the video intervention – after undergoing a "brief and contained training," Heimberg said.

"If we can train people who inhabit dental offices – which psychologists do not – the intervention is more likely to have a sustainable life," Heimberg said.

Once Heimberg and Tellez Merchán finish assembling their staff, they will begin recruiting patients for the clinic.