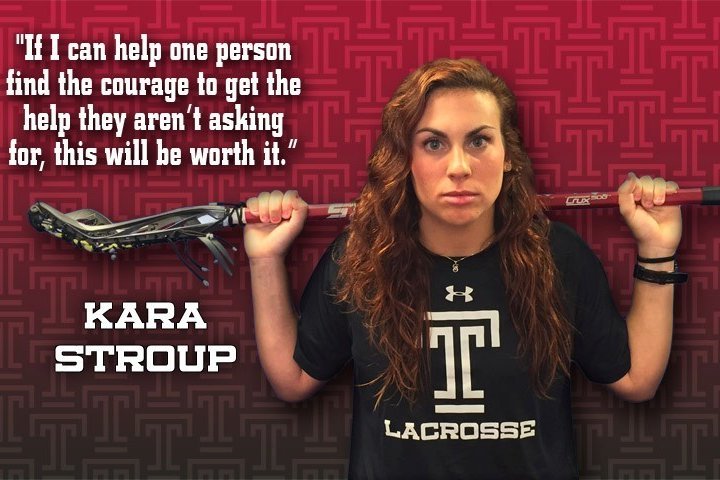 More than a year-and-a-half ago, a 19-year-old University of Pennsylvania student and track athlete named Madison Holleran took her own life.

The New Jersey native suffered from depression, and a year after her death, her parents released her suicide note in an effort to try and help others dealing with similar mental health issues.

On Tuesday, a Temple University student athlete published a personal essay with the same intentions.

In the essay, Stroup notes that while Holleran may have seemed fine to her friends and family, she was battling serious issues internally.

She also writes that while she usually would just share other people's posts on social media concerning the topic of mental health, she felt the need to open up about her own battle with mental health.

Stroup details how she struggled with an eating disorder, and at times considered taking her own life. She says her battle led to two trips to the emergency room and stresses that mental disorders need to be treated like any other disease.

Toward the end of the piece, she calls for those suffering similar issues to reach out and know that they aren't alone:

While it took me a long time to confront my issues, I feel like the exposure of the topic helped push me to address it at a time when I felt like I was at a crossroads for picking the path to how my life would end up. If you're sitting there right now torn about what to do, choose to be a survivor because it can get better. Speak up. You've got this. You are worth it. Your life is worth it.

Stroup, a Garnett Valley native, dedicates the article to a former classmate and her cousin, Bo Tkach, a Northern Lehigh High School graduate who took his own life after a battle with depression and obsessive-compulsive disorder, according to a foundation set up in his memory.

National Suicide Prevention Hotline: No matter what problems you are dealing with, we want to help you find a reason to keep living. By calling 1-800-273 TALK (8255) you’ll be connected to a skilled, trained counselor at a crisis center in your area, anytime 24/7.