The one with Paper, Rock, Scissors, Shoot 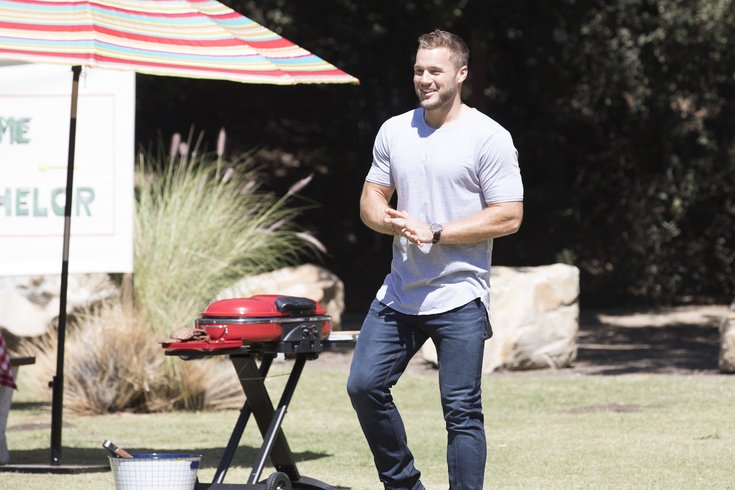 You did it. You successfully made it past the marathon night one episode that featured a fake Australian accent, real-life marriage proposals and Cinderella carriage entrance. On to week two.

We also finally have our first two feuds brewing as “Miss Congeniality” comes to life between Miss Alabama and Miss North Carolina, and between robe-wearing Demi and Cougar-Tracy.

We learn Hannah B (aka Miss Alabama) and Caelynn (aka Miss North Carolina) were roommates during pageant season, and it looks like they both could care less about world peace. Stay tuned for this future Lifetime movie.

Demi really struck a cord with Tracy by touching the group date rose before Colton, and as we learned from Gretchen Weiners, “I mean, that’s just like the rules of feminism.” An epic Tracy-meltdown ensued, and in an even more shocking event than Alshon Jeffery’s dropped pass, Demi went to console Tracy with encouraging words of wisdom such as, “well you’re a wonderful person and a great story teller.”

In the first one-on-one date of the season, the mute birthday girl gave us the most awkward date in “The Bachelor” history. I mean if you can’t open up in hot tub in the desert, when can you? Hannah B. had a chance at redemption with an evening maritime meal, but that conversation sunk faster than the Titanic. In a true producer-manipulated moment, Colton still managed to send Miss Alabama back to the mansion with a rose.

Comedian Billy Eichner made a guest appearance on the camp group date, and with one comment to Colton, had Bachelor Nation roaring, “maybe you’re the first gay Bachelor and we don’t even know!” In case you’ve been living under a rock, you know Colton is a virgin. But the reason why has been a mystery, leaving many “The Bachelor” faithful to question Colton’s sexuality. Billy on the Street did not care and went there. 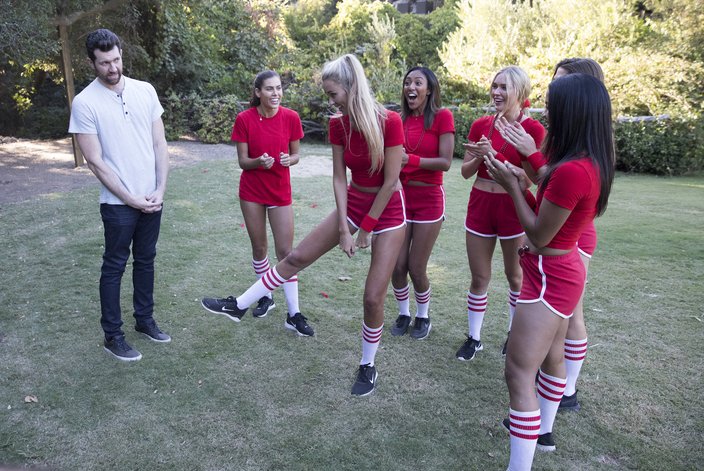 Comedian Billy Eichner drops in on “The Bachelor” to cheer on the contestants.

When the red team beat the spicy mustard team during a muddy tug-of-war battle, they were awarded an evening with Colton while Billy’s spicy mustard team acted like real sauerkrauts. Enter awkward moment number two when Heather revealed to Colton she’s never been kissed, and shockingly is also a virgin, and couldn’t have been more obvious that now was the time. Colton totally botched that punt and went in for the awkward friend hug, leaving Heather’s official job title as “never been kissed.” Don’t feel bad though because Heather received the group date rose – pity rose?  Definitely.

From Sydney banging pots and pans to Demi setting up a weird massage room to Onyeka getting “horny,” the rose ceremony night proved the girls are starting to feel the pressure, and are pulling out all the stops to receive their rose. With Elyse, Hannah B., and Heather all receiving roses on their dates, that meant four girls were going home. Receiving roses this week were Tayshia, Cassie, Caelynn, Courtney, Demi, Nicole, Kirpa, Hannah G., Catherine, Bri, Sydney, Onyeka, Katie, Canadian Caitlyn, Nina and Tracy. Hitting the road tonight were Erika, Annie, Alex B. and Angelique. And then there were 19.

• When the contestants are being filmed talking on the couches in the mansion, the producers will ask people many questions in many different ways as to solicit the emotional response they are looking for. Often producers will ask contestants to repeat their answer in different ways so they can splice and edit the audio to form a totally different thought. Also, per Bachelor Nation alum Diggy Moreland, to get the most airtime sit in the middle couch.

• The Onyeka and Sydney drama during the cocktail party was not by accident. The producers control all time contestants get with Colton while in the mansion. As such, they told Onyeka she could go interrupt Sydney knowing that Sydney and Colton were just beginning to have a substantive conversation, thus creating drama. It also wasn’t an accident that Demi stole Colton from Tracy during the cocktail party given their tiff earlier in the episode.