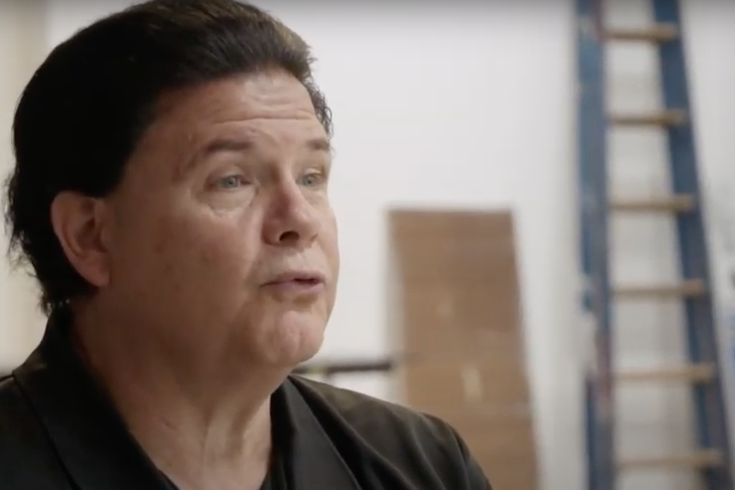 Nick Casselli, president of APUW Local 89, say the U.S. Postal Service's cost-cutting measures ahead of the 2020 general election are like 'sending a soldier into war or battle without a rifle.'

The potential of a presidential election decided by mail-in ballots in swing states like Pennsylvania drew the focus of the latest episode of Showtime's weekly political show "The Circus."

Two of the show’s co-hosts, Alex Wagner and Jennifer Palmieri, traveled to the Philadelphia region to speak with local election officials and voters. The episode can be watched on Showtime’s website with a Showtime subscription or through one's cable provider.

Wagner, a national correspondent for CBS News and a contributing editor at The Atlantic, sat down with City Commissioner Omar Sabir, to learn more about the vote-by-mail process. The city commissioners oversee elections in Philly.

The June primary was the first election held since a 2019 state law expanded access to mail-in voting to allow anyone to request a mail-in ballot. About 1.5 million Pennsylvania residents voted via mail, partly due to the COVID-19 pandemic. It took election officials two weeks to count all of the ballots.

Three million voters are expected to cast mail-in ballots prior to the Nov. 3 general election, leading some to wonder whether it will take weeks to determine which presidential candidate won Pennsylvania's 20 electoral votes. Sabir told Wagner that he doesn’t believe it will take as long to count their ballots because more workers have been hired for the fall.

The city is seeking an additional $6 million in funding to help execute vote-by-mail efforts this November, Sabir said. He also said that it would be a "game changer" if election officials could start counting ballots before Election Day.

"We would love to have it," Sabir said. "Just imagining what an additional three days would mean."

Wagner also traveled to Darby, Delaware County to speak with Nick Casselli about the impact of Postmaster General Louis DeJoy’s cutbacks on U.S. Postal Service operations ahead of the election. Casselli serves as the president of American Postal Workers Union Local 89.

Casselli said mail isn’t being delivered on time and mail-sorting machines are being disassembled. He described the cost-cutting practice as "sending a soldier into war or battle without a rifle."

Palmieri, a longtime Democratic political adviser, spoke to potential voters on the streets of Philly to get a sense of their feelings about voting by mail and if they have any hesitations about not submitting a ballot in person.

"You better believe I'll wear a hazmat suit if I need to go to my local school and vote," one Philly resident told Palmieri.

Given Pennsylvania's status as a swing state in the presidential race, the mail-in ballots could push the election in favor of either President Donald Trump or Joe Biden.

Pennsylvania's 20 electoral votes very well could decide the election. A FiveThirtyEight analysis found Pennsylvania may be the country's most important swing state. If Trump wins Pennsylvania, he has an 84% chance of being re-elected. If Biden is victorious, he has a 96% chance of winning the presidency.

Polling indicates that the race for Pennsylvania will be close. Biden currently leads Trump by an average of 4.3 points, according to Real Clear Politics.

In a recent NBC News/Marist College poll of likely voters, Biden leads Trump by 28 points in the Philly suburbs. Biden’s advantage there is a significant jump from four years ago when Hillary Clinton won Philly’s suburban counties by 13 points, according to the New York Times.

New episodes of "The Circus" can be viewed every Sunday evening at 8 p.m. on Showtime.

The show, in its fifth season, also is co-hosted by John Heilemann, an author and political analyst, and Mark McKinnon, a longtime political adviser and consultant for both major parties.