'The Office!' musical parody puts a modern spin on a popular sitcom

The shows features everyone's favorite characters – with a twist 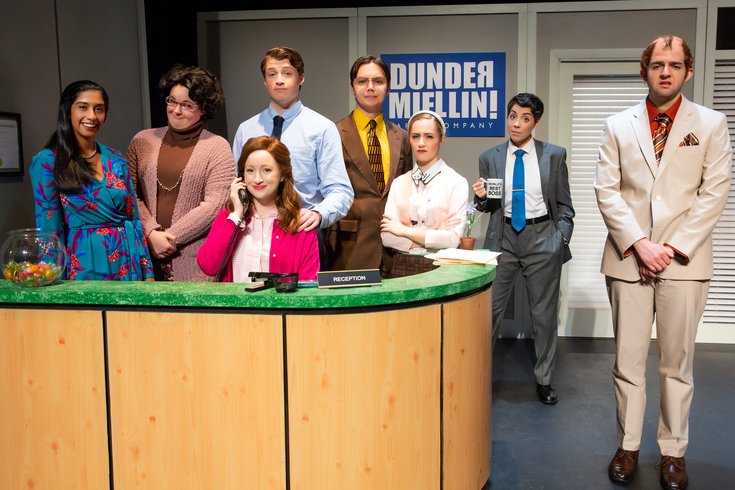 The cast of "The Office!: A Musical parody."

The comedic duo of Bob McSmith and Tobly have been creating outrageous musical parodies of pop culture touchstones for more than a decade.

From the Kardashians and "Showgirls" to "Friends" and "Saved by the Bell," they have poked fun at some of the most iconic movies and television shows of the last 30 years.

Most of those musicals have been staged Off Broadway. But the duo is bringing its latest creation, "The Office! A Musical Parody" on tour following a year of New York performances. It will hit The Kimmel Center's Merriam Theater in Philadelphia on Saturday and Sunday.

The show features all of the popular Dunder Mifflin characters from the popular NBC sitcom, including Michael, Dwight, Pam and Jim – with one variation. In the McSmith version, Michael is always played by a woman.

Songs highlight some of the show's most memorable lines and moments, including “That’s What She Said,” “The Dundies" and “Welcome to Scranton (The Electric City)."

The McSmiths, who are not related, spoke with PhillyVoice about the show, detailing its inspiration and the reaction NBC had to their production. The network referred to the show as "a lampoon with love."

"'The Office!' is our seventh parody musical, we've done a ton in the past, but we actually love the TV show," Tobly said. "It was like our comfort food, as we wrote all these musicals about Kardashians and "Beverly Hills 90210," so we really wanted to wait to get it right. It was really a labor of love, writing this parody, just because of how important the show was to us."

The musical has seven actors, requiring many to play multiple roles as they bring 33 different characters to life.

The sitcom, which was based on Ricky Gervais' original British show of the same name, debuted on NBC in 2005 and continued for nine seasons, ending in 2013. The musical makes a couple of references to the U.K. version of the show, the creators said, but the show is mostly about the American version.

"Our form of parody is a loving form of parody," Bob said. "We definitely do take shots at it. There are parts of The Office that are very problematic now. And so it is fun to rewatch it through a modern lens and kind of point those moments out. [But] we're definitely not taking it down, we're making fun of it with love."

But what made "The Office" so ripe for parody?

"Michael Scott is a big part of it," Tobly said of Steve Carell's clueless boss character. "He was an amazing, hilarious, important character in our eyes. But also, things that he said, and how he carried himself back then were kind of problematic and even more so now, so we bring those to light."

And that's why the show has a female actor portraying Michael.

"Something about her making those jokes really is our way of making fun of it in a sense too," Tobly said.

While persistent rumors of a reboot of "The Office" have never come to fruition, NBC Universal paid a reported $500 million earlier this year to win a bidding war for the show's streaming rights. The series will leave Netflix for the new Comcast-owned streaming service, Peacock, in 2021.

Earlier this year, "Cruel Intentions: The 90s Musical Experience," was performed at the Kimmel Center this year. That show was originally conceived as an unauthorized parody, but was eventually authorized by the movie's creators.

The McSmith's "The Office!" show also is unauthorized, but the creators haven't gotten in trouble with the show's copyright holders, either.

"I think the thing to say is that it's parody," Bob said. "And parody is covered under fair use, as long you're providing commentary and not confusing the marketplace. And what we do is clearly a parody from the moment the lights go up."

Angela Kinsey and Jenna Fischer, who respectively played Angela and Pam on the sitcom, have posted about the musical on social media and have declared their intentions to see it, Tobly said.

The two actresses recently announced that they're launching a podcast next month dubbed "Office Ladies," in which they will watch the series together and comment on it. Kate Flannery, the Philadelphia native who played Meredith on the show, also has reached out to them.

The musical's touring production will be performed on bigger stages than the show's home at The Theater Center in New York, where it just passed the one-year mark of its run.

The Philadelphia show will put the musical right down the road from Scranton, where the sitcom was set.

The tour is visiting Scranton itself for two shows at the Scranton Cultural Center immediately before it arrives here. There will be some specific local touches for the Pennsylvania productions, the McSmiths said.

"The Office: A Musical Parody" is coming to The Kimmel Center's Merriam Theater on Sept. 28 and Sept. 29. Order tickets here.