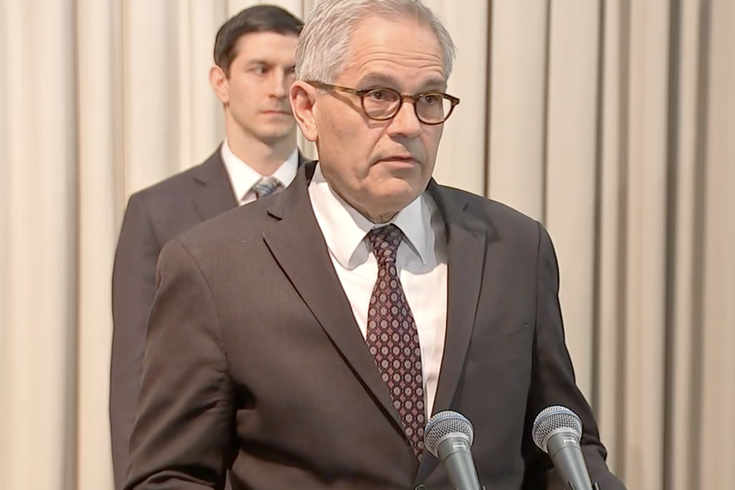 Former Philly police officer Edsaul Mendoza is charged with murder in the fatal shooting of 12-year-old Thomas Siderio on March 1, 2022. Siderio was unarmed and on the ground when he was shot in the back. Mendoza has since been fired from the police department. Moments before he was killed, Siderio had fired a gun into an unmarked police car near 18th and Barbara streets.

The former police officer who shot and killed 12-year-old Thomas "TJ" Siderio in South Philly in March has been charged with murder, District Attorney Larry Krasner said Monday. The charges arise from a grand jury investigation, during which evidence was presented that alleges the boy had been shot in the back while on the ground.

Edsaul Mendoza, 27, was suspended from the Philadelphia Police Department a week after the shooting and later fired for violating the department's use-of-force policies. He was arraigned on murder and related charges on Monday morning.

Siderio was a seventh grade student at Sharswood Elementary School. On March 1, he had fired a gun at an occupied unmarked police vehicle, leading to a chase. It ended with Mendoza shooting the boy, allegedly in the back while he was on the ground and unarmed, prosecutors said.

Mendoza, who had been a five-year Philly police veteran, was among four plainclothes officers who were in the police vehicle near 18th and Barbara streets. At around 7:30 p.m., the unmarked vehicle approached Siderio and a 17-year-old boy. As one of the officers turned on the car's police lights, gunfire struck the rear windshield, shattering glass into the eyes of one of the officers, investigators said.

Those shots were fired and the police lights went on "almost simultaneously," Krasner said Monday. The unmarked vehicle's windows were tinted.

Mendoza and another officer exited the vehicle to chase Siderio and the teen, each firing shots in Siderio's direction.

Mendoza fired three bullets during the pursuit. Prosecutors allege the third shot struck Siderio after he had dropped his weapon and was on the ground about half a car length away from Mendoza. The boy had been on the ground for as long as six seconds, investigators said.

The timeline of events was pieced together using video evidence that has not been publicly released.

"It is certain that Thomas Siderio, at the time he was shot, had stopped running," Krasner said.

"When Officer Mendoza fired the third and fatal shot, he knew the 12-year-old, 5-foot tall, 111-pound Thomas Siderio no longer had a gun and (had) no ability to harm him," Krasner said. "But he fired a shot through his back, nonetheless, that killed him."

"Right after Thomas Siderio drops (the gun), (Mendoza) calls out, 'Get down!'" Krasner said. "Why are we shifting from 'drop the gun,' to 'get down,' unless you saw the gun drop?"

Initial reports about the shooting suggested the plainclothes officers had been in the area to investigate a social media post about a teenager armed with a gun. The officers involved gave diverging testimony about why they stopped Siderio and the other teen. Two cops claimed they stopped the juveniles as part of a stolen firearm investigation. The other two did not dispute this, but said the stop was prompted by a traffic violation because the teens were riding bicycles the wrong way on the street.

The grand jury's findings raised issues with the nature of the stop, noting that plainclothes officers are not permitted to make traffic stops of this kind. The tactics used on the night of the shooting can lead to danger and confusion, Krasner said.

"It would appear that this tinted, unmarked car containing police who were not in uniform — who are either visible simply as wearing a street shirt, or visible as wearing street clothes with vests that have no designation of police on the front — this is the kind of encounter that could cause someone on the street to believe that the people who are pulling up are not police at all," he said.

At the time of Mendoza's dismissal, Philadelphia Police Commissioner Danielle Outlaw stated that the department found the officer did not follow protocol.

“It was clear that the use-of-force policy was violated," Outlaw said on March 8.

Mendoza's decision to fire two shots at Siderio after the boy dropped the weapon will be a crucial facet of the case. Prosecutors declined to say whether Mendoza was still running toward Siderio at the time he fired the final shot at the boy.

Krasner said Mendoza made untruthful statements about his location at the time he fired the final two shots at Siderio.

After his death, friends and family recalled Siderio as a well-known kid who had a large group of friends, but who also had gotten mixed up in dangerous circles.

The District Attorney's Office also is investigating how Siderio obtained the gun he had been carrying the night he died, but did not offer any further details.

Krasner said the investigation remains ongoing and the video evidence given to the grand jury will not be released at this time.

It's not yet clear whether the video will be made public.

"There may very well come a time when we are able to show that video, but we are not going to do that unless or until we have certainty from the judge that we are permitted to do so," Krasner said.