How to see the blood moon this weekend

The astronomical event occurs when there is a total lunar eclipse, causing the moon to glow reddish-orange 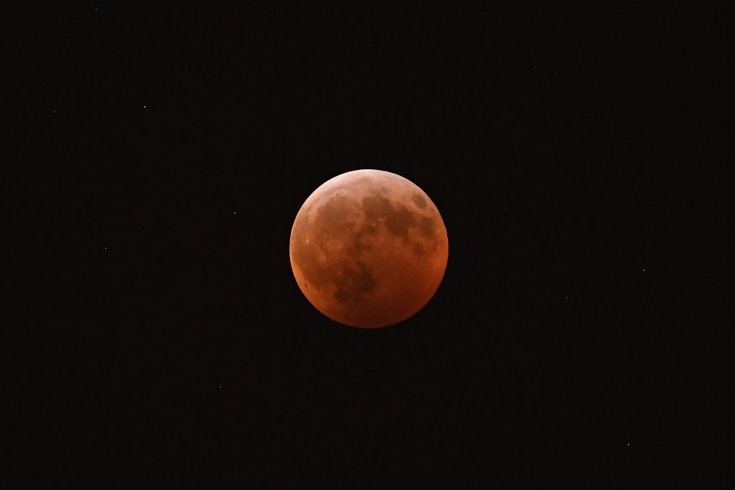 May's Flower Moon is also a total lunar eclipse known as a blood moon. In the Philadelphia region, the moon will appear reddish-orange or brown for about 90 minutes on Sunday night into Monday morning.

The first, full lunar eclipse of 2022 happens this weekend. The astronomical event, also known as a blood moon, will bathe the moon in a reddish hue and will be visible throughout the Philadelphia region and much of the United States.

To see the blood moon at its peak here, stargazers will have to stay up late Sunday night into the early hours of Monday morning. The total lunar eclipse lasts for about 90 minutes.

The moon will enter the outer portion of the Earth's shadow, or penumbra, around 9:30 p.m. Sunday. An hour later the partial lunar eclipse begins as the full moon continues to rise to its highest point in the night sky. The total eclipse starts at 11:28 p.m., according to the Farmers' Almanac, and reaches its peak at 12:11 a.m. Monday. The reddish orange color cast upon the surface of the moon will be most intense during the peak, but the moon will be shades of orange, yellow and brown for much of the night.

The blood moon has no real astronomical significance, it is named for the striking view it creates. This blood moon coincides with May's flower moon, the name given to the month's full moon.

During a total lunar eclipse, the sun and moon are aligned on opposite sides of the Earth, and the Earth blocks sunlight from directly reaching moon. But some rays do reach the lunar surface, as NASA explains:

Full moons were named by Native American tribes based on the times of year when they occur, so it's no surprise that May's full moon is called the flower moon. The name is credited to the Algonquins, who knew that May was the best time of year to see flowers emerge, although some Algonquin tribes also refer to this month's full moon as the corn planting moon or milk moon.

People in most of North America, South America, Western Africa, and parts of Europe will be able to see this weekend's full eclipse, but portions of the U.S. Pacific Northwest and Canada will only see a partial lunar eclipse.

The Holcomb Observatory in Indiana tweeted out a time lapse video of what the total lunar eclipse will look like to most of the United States.

Less than 1 week to the TOTAL LUNAR ECLIPSE! The eclipse will be visible in most of N & S America. Nearly all of the continental USA will see the TOTAL portion, with the Eastern half of the USA being able to see ALL portions of the eclipse. pic.twitter.com/9ooWeI6N0K

Lunar eclipses are perfectly safe to view with the naked eye, unlike solar eclipses, which require special eyewear to avoid vision damage, although binoculars or a telescope can enhance the experience.The moon will pass south out of the Earth's shadow, so the top portion of the Blood Moon should appear the brightest, though it is difficult for experts to predict exactly how it will appear to stargazers.

The most recent total lunar eclipse occurred last year, but it was not fully visible in the Mid-Atlantic states. The last eclipse was visible to the entire United States was the super wolf blood moon on Jan. 20, 2019.

Those who can't get outside to see the eclipse can watch NASA's livestream, featuring experts chatting about eclipses and the view from other parts of the world.

Note: Portions of this article were rewritten after it was published.