Adam Sandler's 'Hustle,' filmed in Philly, gets new trailer ahead of June debut on Netflix 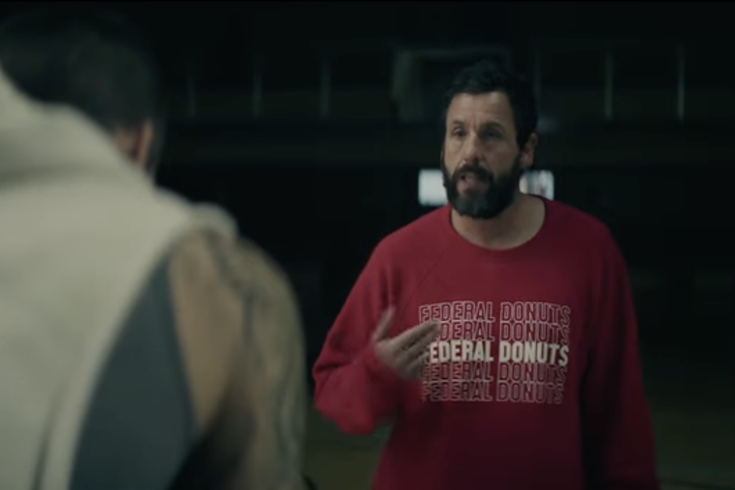 Adam Sandler, wearing a Federal Donuts sweatshirt in the trailer for 'Hustle,' the Netflix movie filmed in Philadelphia and the surrounding region during the past two years. The film will hit the streaming platform on June 8, 2022.

The much-anticipated premiere of "Hustle," the Netflix film starring Adam Sandler that was filmed in and around Philadelphia, now has a new trailer ahead of a June 8 release on the streaming platform.

The film was shot in 2020 and 2021, bringing production crews to locations including Center City, the Italian Market, North Philly, South Philly, Manayunk, Chester, Coatesville and Camden.

The movie stars Sandler as Stanley Beren, a basketball scout attempting to jumpstart the NBA career of a troubled overseas prospect, portrayed by NBA player Juan Hernangomez. Beren finds his guy an opportunity with the Philadelphia 76ers, but it's not an easy path to the NBA for the player or the soul-searching scout.

Sandler shared the new trailer in a tweet Tuesday morning.

The trailer includes scenes from South Philly's Capitolo Playground, Girard College, The Palestra and the 76ers practice facility in Camden.

Netflix released the first trailer for Hustle in February, showcasing a number of recognizable Philly locations. We made a quiz about the Philly sights and sounds in that trailer and an answer key to check your recognition skills.

The latest trailer flashes a bit more of the humor and struggle in "Hustle," which was co-produced by Sandler's Happy Madison, LeBron James' The SpringHill Co. and Roth/Kirschenbaum Films. The SpringHill Co. was founded by James and his close friends, Maverick and James Carter.

Directing duties were led by South Philadelphia native Jeremiah Zagar, who is following up on his critically-praised 2018 adaptation of the Justin Torres novel, "We The Animals." Zagar's father, Isaiah, is the artist behind Philadelphia's iconic Magic Gardens on South Street. His mother owns the nearby art space Eyes Gallery.

Sandler has embraced his love of basketball in recent years, including his standout performance alongside Kevin Garnett in the Safdie brothers' 2019 crime thriller "Uncut Gems." Netflix has signed on with Happy Madison to produce four more films. Sandler also recently confirmed he'll be doing another feature length movie with the Safdie brothers.

During the production of "Hustle," Sandler interacted with Philly residents and routinely visited local businesses in the city. The actor and comedian, famous for incorporating music into his standup sets, even purchased a pair of guitars at DePinto's in Fishtown.

"Hustle" is the latest in a string of film projects that have shined light on the Philadelphia area, including HBO's hit series "Mare of Easttown," the Idris Elba-starred "Concrete Cowboy," and M. Night Shyamalan's Apple TV series "Servant."